Book Review: Based on a True Story by Delphine de Vigan 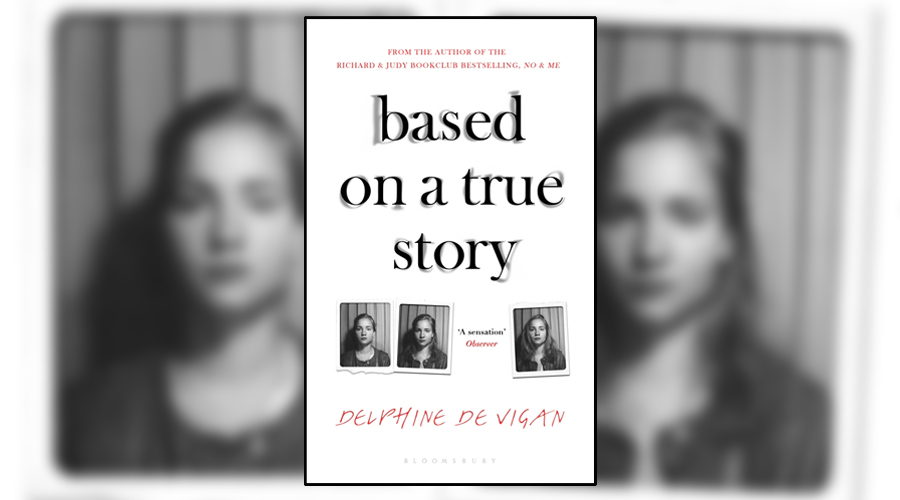 Delphine de Vigan is interested in the fine line between fact and fiction as is apparent by her previous works of ‘autobiographical fiction’. She takes snippets from reality and uses her fertile imagination to frame a coherent, fragmented narrative around it which transcends the boundary between the two disparate elements. In a way that couldn’t be more like life itself. After all, don’t we all fashion stories out of our experiences to give it some semblance of order?

Where does reality end and fiction begin? In this book she has combined the two in a way where it’s difficult to tell where one ends and the other begins. The title couldn’t be more apt as the premise is steeped in reality but there is obviously some fabrication involved.

This book begins with D caught up in the maelstorm stirred up by the controversial events of her life (like her mother’s suicide) that she unflinchingly addressed in her last book. She is dealing with the intense and polarizing reaction to her divisive writing and the fervid backlash has made her cautious and somewhat wary of venturing into personal terrain. This, combined with her perpetual insecurities, has consolidated her lingering writer’s block so much so that she is unable to even type a single word. She is also entering a pivotal phase in her life as her children, now adults, are leaving home which, in hindsight, clears the way for L to enter and occupy the void left behind.

Her meeting with L is a result of a chance encounter and from there on she inevitably becomes an indispensable part of D’s life. L manages to integrate herself around D’s schedule so she is always there when D is at her most vulnerable. L is a professional ghostwriter who has worked on some memoirs of a few celebrities. What D overlooks is the fact is that her profession makes her an expert in prodding, pulling on threads and inciting reactions. L starts playing mind games with D, attacking her where she is most exposed – her writing and personal life. She impels D to abandon work on her new fiction and instead, draw on her turbulent past for inspiration. She is convinced that L has untapped reserves of private reflections which she should put her energy into, rather than concocting a shallow fictional world.

The two women have stimulating discussions on the function of writing and literature which are extremely engaging to read. D has learnt her lesson the hard way after exposing her true self via the written word and is at a point in her life when she wants to take refuge in the comfort of creating fiction. L on the other hand feels that fiction has been made redundant by the onslaught of news and reality-based events which are stranger than fiction. She thinks she is liberating the writer in D and breaking down her emotional defences when she is only persuading her to do her bidding.

L’s constant cajoling and criticism gradually weakens the armour of D’s self-belief. She starts to cave in to the latter’s emphatic arguments and that’s when her life starts to unravel in mysterious ways with her getting more and more dependent on L, both emotionally and psychologically. Delphine smartly veers away from making this intriguing premise dissolve in overdramatic, grip-lit tropes. She keeps the open-endedness of the story alive till the very end which is what makes this book so memorable.

Delphine’s writing style is reminiscent of Gillian Flynn’s finely attuned observations and her knack for elegant turn of phrases. Her prose is alluring, inwards looking and eloquent. Based on a True Story is a sophisticated piece of literary fiction which takes the best of ‘obsessed stalker’ thrillers like Stephen King’s Misery (which is quoted in the book as well) and refines it into an intelligently crafted book about the process of writing.

The fact that we know part of the book is based on reality gives the story a riveting meta feel. As readers, we have different barometers for judging a fictitious story and a reality so in that regard, this book is enigmatic in the best possible way. The story will leave you questioning not just L’s motives but also the veracity of Delphine’s claims. Is L real or is she just a figment of D’s addled brain? Is L a metaphor for the writer’s fears? Delphine’s remark about her last book perfectly sums up my thoughts on this: “The book was a sort of mirror, whose depth of field and contours no longer belonged to me.”