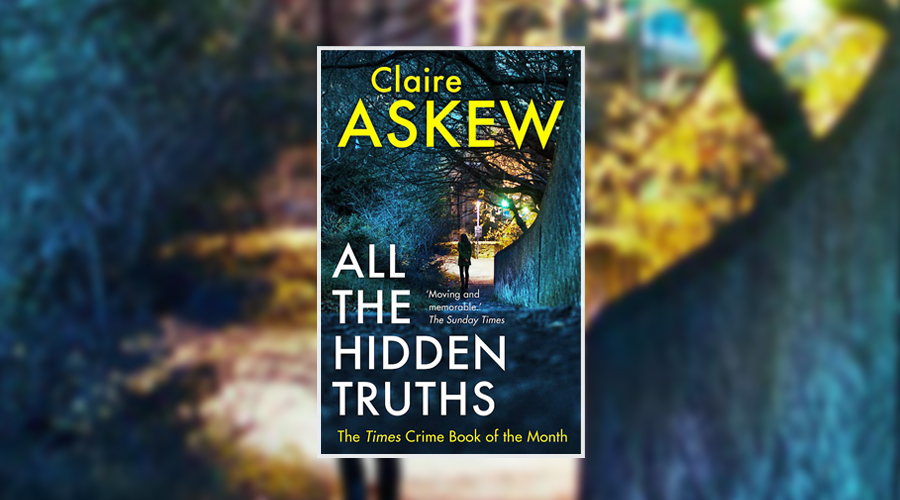 The plot for Claire Askew’s debut novel All The Hidden Truths is something we’re sadly all too familiar with. We’ve witnessed the breaking news stories on screen. We’ve seen it splashed across the front of newspapers. We’ve watched it unfold live on social media. School shootings shouldn’t keep happening, and yet they do, mostly in America where gun laws enable impressionable minds to pick up weapons and aim them at their peers. Keeping the focus on home soil, Askew’s story is set in the wake of a college shooting in Edinburgh, and it’s all the more devastating because it feels like real life reflected on the pages.

It’s a sunny spring morning when Ryan Summers walks into Three Rivers College and starts firing. He kills thirteen women, then himself, and in the aftermath of the shooting we see how this terrible act of senseless violence affects three women at the centre of the tragedy. DI Helen Birch is on the first day of her new job when she’s tasked with leading the investigation into the shooting. Moira Summers is the shell-shocked mother grappling with the reality of her son being a murderer. Lastly, there’s Isbel Hodgekiss, the mother of Ryan’s first victim, who’d argued with her daughter the night before and now faces a lifetime of regret and heartache.

All three women are searching for answers, and as the story unfolds, we learn the when and how. Yet the biggest question, the one that Ryan took with him the moment he turned the gun on himself, is why. It’s the answer they yearn for the most and the one they’ll never receive, making these characters’ respective and collective journeys shattering to read and impossible to comprehend.

Isbel and Moira are the two most affected by the tragedy, and whilst it’s Isbel who we immediately sympathise with, Moira is grieving the loss of a child too. With nobody for the world to blame except the mother of the shooter, Askew ponders whether Moira’s grief is as valid as Isbel’s. They both lost their only child, but does Ryan’s terrible crime cancel out his mother’s right to mourn? Is the blood also on her hands because she sensed something was wrong with her son but failed to notice what he was planning?

Guilt and blame are thrown from one person to the next as the families’ secrets tumble out and the press camp outside Isbel and Moira’s houses, trying to uncover something scandalous to sell papers and shock the world. Even DI Birch isn’t immune to the weasely reporters who suggest police incompetence and negligence as reasons why Ryan wasn’t apprehended sooner, putting Birch’s job at risk and weighing the heartbroken families’ down with more stress and burden. Birch has known loss, pain and anger in a similar way to Isbel and Moira, and whilst it allows her to empathise with them in a way her hardened superiors can’t, it also threatens to cloud her judgement on more than one occasion.

Askew doesn’t sensationalise the crime or overdramatise the characters’ anguish. She writes their sorrow with subtlety, exploring the different ways people come to terms with sudden acts of violence and the ensuing grief that feels as if it will never subside. Once the initial panic and shockwave of the shooting dies down, All The Hidden Truths settles into itself as an affecting character driven novel that questions how much we know about the people we love, how we overlook the things we’re frightened of confronting, and how the world, specifically the media, responds to tragedies of this form and magnitude. It’s a thought-provoking, thoughtfully written and all too relevant novel that leaves a lasting impression.

All The Hidden Truths is out now in hardback and is published in paperback by Hodder & Stoughton on 2 May 2019.

Why you need to watch Terrace House: Boys & Girls in the City