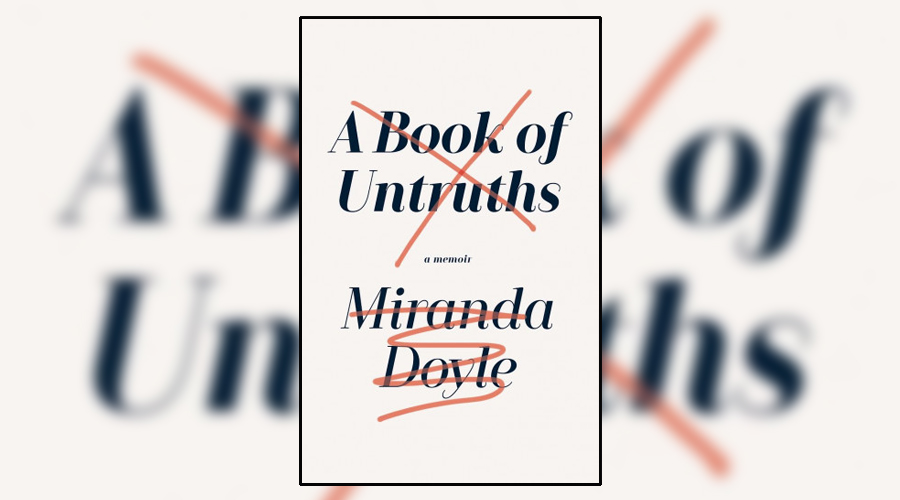 “Many people believe that memory works like recording device,” says Loftus. “But decades of research has shown that’s not the case. Memory is constructed and reconstructed. It’s more like a Wikipedia page — you can go change it, but so can other people.”

In this era of post truths and ‘alternative facts’, the concept of objective reality and truth has become extremely fascinating to writers lately. While politicians have specific agendas to peddle their lies, that is not the case with regular folks but even then we spend most of our life in the grey zone between truth and untruths. It’s a well known fact that everyone’s reality is different but what constitutes reality and why do we all interpret it differently? This book contemplates this and more. A Book of Untruths consciously raises pertinent issues about the nature of memory and inadvertently forces one to question the subjective bias with which we all interpret our experiences.

Miranda Doyle interweaves psychological research and personal experience to convey how most of her childhood was based on a series of lies fabricated and sustained by her family. Her dad, a philandering maths lecturer and a temperamental individual, is arguably the No. 1 culprit but interestingly, throughout this book the writer seems to be more approving of him rather than of her mother who seems to have bore the brunt of his pathological lying. That in itself, creates an interesting dimension to her memoir because like everyone else, she has her blind spots and her memoir only narrates the reality she chose to see.

The research regarding lies, self-deception and attachment is fascinating to read when she links their relevance to our lives. The studies Doyle refers to are pretty standard psychology 101 fare. I understand that this book is not supposed to be a scientific book but I did think that she could have dug deeper when it comes to her areas of interest. As someone who has been studying psychology for a few years, I found her take a bit lacking but some interesting literary references did catch my attention.

Throughout the book she diligently tries to tell the ‘whole truth by corroborating facts from diary entries, old letters, photographs and her siblings’ accounts. The first half of the book is thoroughly gripping and her childhood comes across as grim and unusual. Scientific research notably tapers down in the latter half with her narration getting slightly self-indulgent.

There are some very candid insights into how families smooth over discrepancies and collude on lies only to maintain a semblance of unity and order. The character of the writer’s mother came across as the one most unfairly treated. Like most mums, it was her job to placate everyone in the family and unlike the writer, I really sympathized with her as she not only had to deal with her husband’s various betrayals, but she had to maintain a solid front in front of her disgruntled children and disapproving parents.

A Book of Untruths is a very candid and engaging personal account written by a self confessed biased and flawed perspective that only makes it more accessible. I found myself disagreeing with the narrator on some levels but she presents her point of view in a very eloquent and honest manner, which gives it more depth. A stimulating insight on the fallibility of our memories and perfidious perception.