To call Beyond Skyline an action movie would be an understatement. Even calling the action ‘non-stop’ doesn’t quite get across the maniacal pace that propels it from the LA Metro crash at the beginning, to the absurd Laotian fight scene at the end. It never lets up, never pauses to take a breath. And this is the reason behind both the movie’s weaknesses, and its greatest strengths.

Let me pull back a little and tell you about the story, or at least as much as is decipherable. Mark (Frank Grillo) is a detective who’s taken some time off the force after the death of his wife. Her death has turned him to drink, and caused his son, Trent (Jonny Weston), to become a delinquent.

On the way home after picking him up from the police station after another incident, the Metro train Mark and Trent are riding on crashes to a halt. When they eventually make it outside, they see that a giant spaceship is now hovering over the skies of Los Angeles, emitting a beam of light that draws anyone who looks at it up into the ship. Despite putting up a good fight, Mark, Trent, and a group of their fellow passengers soon find themselves in the belly of the beast. And then things get really weird…

There’s no sense in describing the plot any further because, well, it doesn’t make any sense. Beyond Skyline (a stand-alone sequel to 2010’s Skyline) is little more than a series of frenetic set pieces, held together with a typically charismatic central performance from Frank Grillo. For a good hour of its run time, there is no overall goal that our thinly-sketched characters are trying to achieve, other than to survive. It’s only in the third act that the film attempts to put forward an explanation for all we have seen. As you’d expect, it’s flimsy.

Whilst there may be little rhyme or reason to Beyond Skyline’s onslaught of happenings, it’s still a wildly fun movie. One highlight is Grillo, clad in a khaki vest, running around the space ship with a new-born baby in one arm, whilst he weaponises the other by inserting it in a weird alien machine. This scene is made all the better thanks to the multiple shots where the baby is clearly revealed to be a doll, and in one, nothing more than a pile of rags. 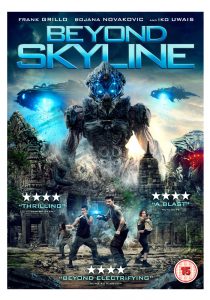 The break-neck pace may contribute to the overall sense of fun, but it still would have done the movie good to slow down, just a little bit. An astonishing number of people are dispatched in a relatively short space of time, and because we never really get to know them, their deaths leave no emotional impact. Giving the characters a sense of purpose earlier on would have helped during the moments where the action seems incomprehensible.

Still, there’s plenty of good here. The special effects can be variable in quality (see the aforementioned doll-baby), but the character design on the aliens, and within the ship, is a lot better than it needed to be. There’s also plenty to satisfy the gore hounds; multiple scenes which feature brains being cut out and eaten, and a man who has to lose three limbs before he stops fighting.

Beyond Skyline is pretty much what you’d expect from a fun, straight-to-video action movie – it’s big on thrills and big on nonsense. If that sounds good to you, then you won’t be disappointed.