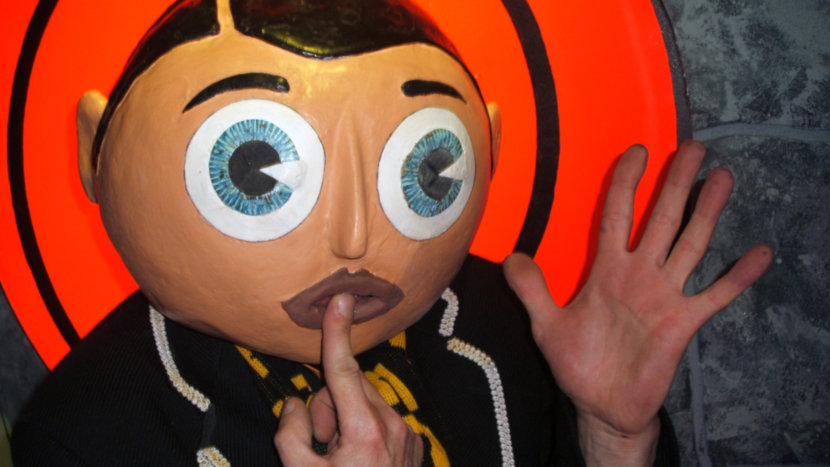 Chris Sievey, first and foremost, is an artist. Creator of the magnificently weird Frank Sidebottom, Sievey has a passion for creativity unlike anything you’ll ever see. Music, animation, painting, drawing, poetry, comedy, performer, filmmaker – the list is endless. He is the perfect encapsulation of a creator who simply didn’t have enough time in his life to create everything in his mind. Being Frank: The Chris Sievey Story is equally hilarious as it is poignant; as personal as it is observationally detached. The man under the mask was a true artist and his attitude to make, make and make some more is infectious.

Beginning with his music endeavours, Being Frank takes us on a journey through his mind as he formed bands with his brother and friends and stumbled upon the creation of Frank Sidebottom. As a child he’d set up Subbuteo shows and charge his friends to attend. His art teacher noted in his report how “his fantasy is not always a success” and, in Being Frank, depending on your definition of success, this may be representative of his life. Chris and his brother Martin formed “Hard Sharks” and “Big Cheese” but nothing truly panned out until he led The Freshies and had something of a hit with ‘I’m In Love With The Girl On The Manchester Virgin Megastore Check-out Desk’. Part-punk, part-pop, his unique form of public relations was what separated them from other. He’d contact agencies and create hand-written cassettes, with his own art and patterns to fill the spaces. Hilarious examples of how he generated attention for The Freshies are discussed at length and you’ll be left wondering “Where’s the yellow spot?” and it’ll keep you laughing once you know what it’s all about. 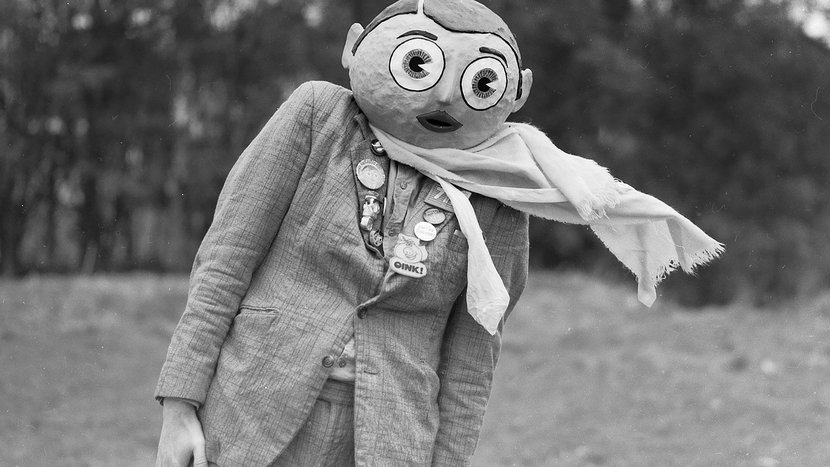 Then Frank Sidebottom is introduced: an accidental find that was a runaway success. Sievey’s prolific predilection meant that Sidebottom would appear on children’s TV, performing at gigs and presenting television. “He’s a trier” his wife explains, as Sievey seemed to constantly create further barmy exploits for Frank. A football club? Frank had his own Big Shorts FC. A tour? Sidebottom would personally conduct tours around his “hometown” in Timperley. Sievey wears a t-shirt at one point stating boldly “When you kill time, you murder success”. He would always be on the move and his alcoholic and drug dependence sadly bled into his professional and private life. In 2010, Sievey succumbed to cancer and was championed by many and celebrated in Timperley with a statue wearing the trademark Frank Sidebottom head with thumbs, firmly pointing up.

Being Frank: The Chris Sievey Story is functional in the talking heads and chronological order of events but what a magnificent story. Frank Sidebottom seems like performance art; his masking taped drawings pinned to the wall of the Chelsea Space are akin to Dada or Surrealist art pieces. In a world of mass-consumption and an elite art society that excludes those without the cash to take part, Chris Sievey was a welcome relief who wasn’t previous about his audience and merely appreciated being appreciated. Being Frank: The Chris Sievey Story is about the process and not the outcome; about the desperation and challenges of being an artist; about a man who refused to adhere to settling down, getting a job you don’t like and moaning about it down the pub. Do what you love and don’t look back – and keep on creating.