If you’ve seen Claire Simon’s documentary The Graduation, you’ll know that even to get accepted into esteemed French film school La Fémis is a daunting challenge. Louis Malle, Arnaud Desplechin and François Ozon are just a few of the talented filmmakers who got their start there. With her debut film Ava, recent La Fémis graduate Léa Mysius proves herself well worthy of a place on that prestigious list of alumni.

Ava (Noée Abita), a thirteen-year-old with a degenerative eye disease, discovers that she will lose her vision far sooner than expected. Processing this huge news, she spends the summer at the beach with her mother Maud (Laure Calamy), and baby sister. Though Maud is caring, her new boyfriend has her distracted, and so Ava is left largely to herself.

Ava is drawn to Juan (Juan Cano), a brooding loner and undocumented immigrant, who spends most of his time trying to avoid the police. The two outcasts quickly bond, and proceed to get into all kinds of trouble together.

Shot on 35mm, Ava looks resplendent from the first frame to the last. Set over a summer by the sea, all the colours radiate heat. Mysius situates the bulk of the action on and around the beach. She finds countless interesting compositions, from the black dog running through the sunbathing masses at the beginning, to the starker scenes where Ava and Juan sit alone, tiny, on top of an enormous rock.

Every shot of the film thrums with innovation and creativity, none more noticeably than the dream sequence; a manifestation of Ava’s fear surrounding her sight loss. She envisions herself and her family with huge eyes and no eyes, and eyes in the wrong places. There’s shocking violence and graphic sex, all for just a few seconds. It’s a stunning scene, one that takes a lot of recovering from. 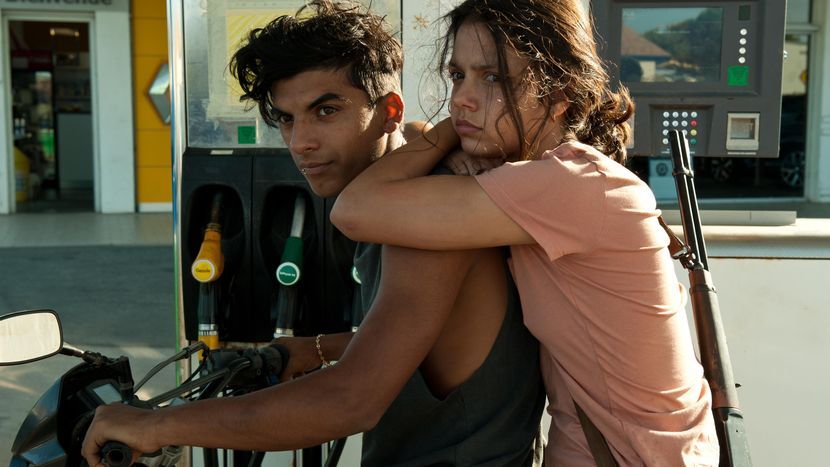 Ava is not only the first film of its director, but also for its leading lady. Abita is a natural. Ava must have been a tricky character to play as she’s so inward. She isn’t given lengthy, eloquent speeches about her fear of impending blindness, because that wouldn’t be natural for a thirteen-year-old girl. It’s all in the way she holds herself, and in her abrasiveness. She’s skilled at showing the vulnerability behind what are often scabrous words.

The first hour of the film chiefly concerns Ava’s relationship with Maud, who veers between being devastated for her daughter, angry at her, and just wanting her to go away so she can spend time with her new man. Multiple scenes show us that she does care, but just as many show that she doesn’t have the capacity to look after this deeply troubled child. Like Ava, her character receives an admirably nuanced treatment, and it’s fascinating, and often quite funny, to watch this awkward mother-daughter dynamic play out.

The only place Ava veers off track is in the third act, when the film shifts gears and becomes something more akin to Bonnie and Clyde Jr. Maud completely exits the picture, never to be seen again. Whilst the ending is not a bad one, it’s disappointing to see the mother-daughter relationship abandoned completely in favour of a narrative turn that just isn’t as compelling.

Despite that misstep, overall Ava remains an enthralling watch; innovative, vibrant and astute. And it is only Mysius’ first feature. The prospect of future films from the young director is exciting indeed.