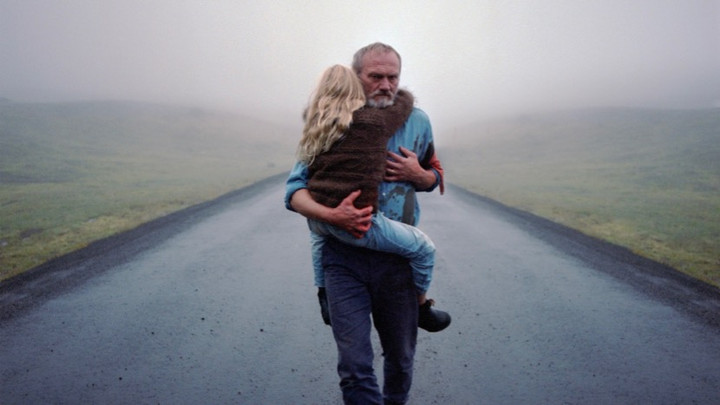 Theatre Review: The Merchant of Venice at Drayton Arms Theatre

After his wife dies in a car accident, Ingimundur (Ingvar Sigurdsson) does his best to carry on. He’s a police officer in his small, sleepy town. He often looks after his beloved granddaughter Salka (Ída Mekkín Hlynsdóttir) – he’s even building her and her mother a house. Although he misses his wife terribly, it’s business as usual until he finds some evidence that suggests she may have been having an affair. Determined to discover the truth, Ingimundur’s life soon starts to go off the rails.

A White, White Day really dives into the horrible pain of discovering that a loved one had a side to them that you never knew, and it being too late to ask them anything about it. Ingimundur’s wife’s infidelity completely throws him. When he asks his friend if he’s ever cheated on his wife, and his friend replies in the affirmative, he’s surprised. The concept of cheating just hasn’t occurred to him before, and it seems to have been going on all around him.

And it changes everything, colours everything. All the memories they shared over decades together. Ingimundur’s quest for revenge is not so much borne out of anger as a desire for more knowledge. His world has been upturned and he wants to understand why. It would be a stretch to call this a revenge movie for the simple fact that the revenge takes up so little of the duration.

The heart of A White, White Day is in the relationship Ingimundur has with his granddaughter, Salka. As his daughter is a bit of a train wreck, he ends up doing most of the caring for Salka, but it doesn’t bother him. They’re the best of friends. She gives him some of the companionship he’s been missing, and he gives her the stability she’s never had. It’s a compliment to writer-director Hlynur Palmason, as well as the actors, that the two of them appear so comfortable and natural together. The film spends a lot of time developing their partnership, and so when Ingimundur snaps and begins taking things out on her towards the end, it stings.

Palmason also deserves credit for his very careful shepherding of tone. A White, White Day deals with mental collapse after the loss of a partner. It’s heavy stuff and is treated as such. But there’s still plenty of humour here. From Salka’s endearingly straight-faced proclamation, “If I’m angry or annoyed about something then I’m more likely to fart”, to the hilariously inappropriate bedtime story Ingimundur tells her when she is sick, this is a very funny movie. That doesn’t take anything away from the difficult emotional terrain; in fact, it accentuates it.

Life is messy, strange, and ever-changing. Trying to corral conflicting emotions into a socially-acceptable front doesn’t do anyone any favours. A White, White Day gets down in the dirt with a man desperately trying to navigate the upheaval in his life, and sits with him as he figures it out. The result is nuanced, comedic, sad, scary, moving, and exciting. Brilliant.

Theatre Review: The Merchant of Venice at Drayton Arms Theatre