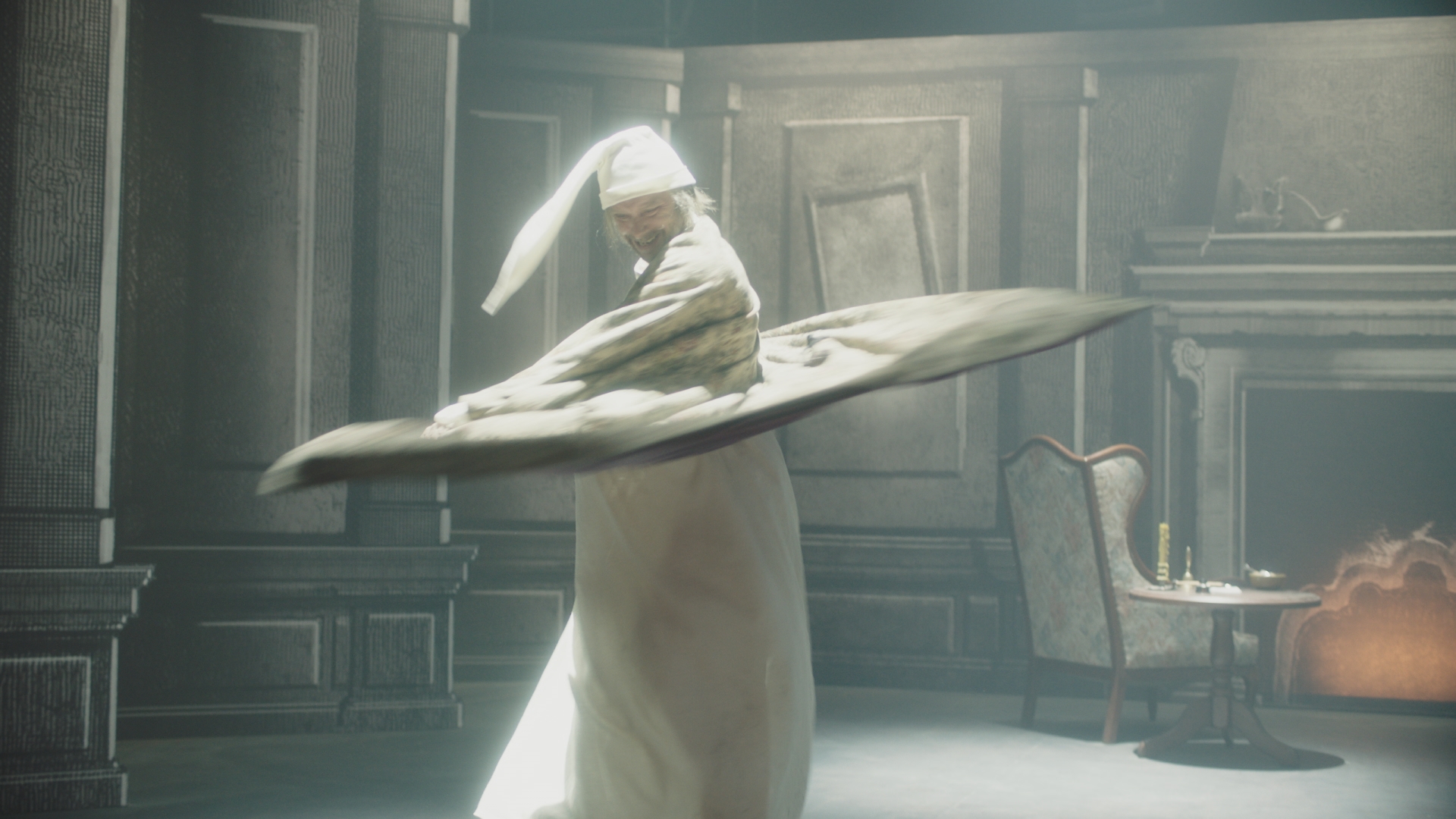 Arriving just in time for the festive season comes this brand new retelling of Charles Dickens’ A Christmas Carol. Combining emotive drama with spoken narration and dance performances led by former Royal Ballet Principal and BalletBoyz co-founder Michael Nunn, this adaption by sibling directors Jacqui Morris and David Morris leans in to the darker, ghoulish elements of the classic fable, delivering an allegorical performance that’s about as close to going to a live theatre production as you can get without actually going to one.

Opening with a Victorian family as they prepare a toy-theatre for their annual performance of A Christmas Carol, we – the audience – are inventively invited into the story as it unfolds. The cardboard stage lovingly set up by the children transforms into the real thing, setting the scene for Scrooge and his Christmas ghosts. One by one the ghosts appear to the mean-spirited, unmerciful Ebenezer, starting with his former business partner Marley – a groaning, twisted apparition shackled in chains – and moving through the ghosts of Christmas Past, Present, and Yet To Come, who show Scrooge his life then, now and how it will end up if he continues on his heartless, lonely path. 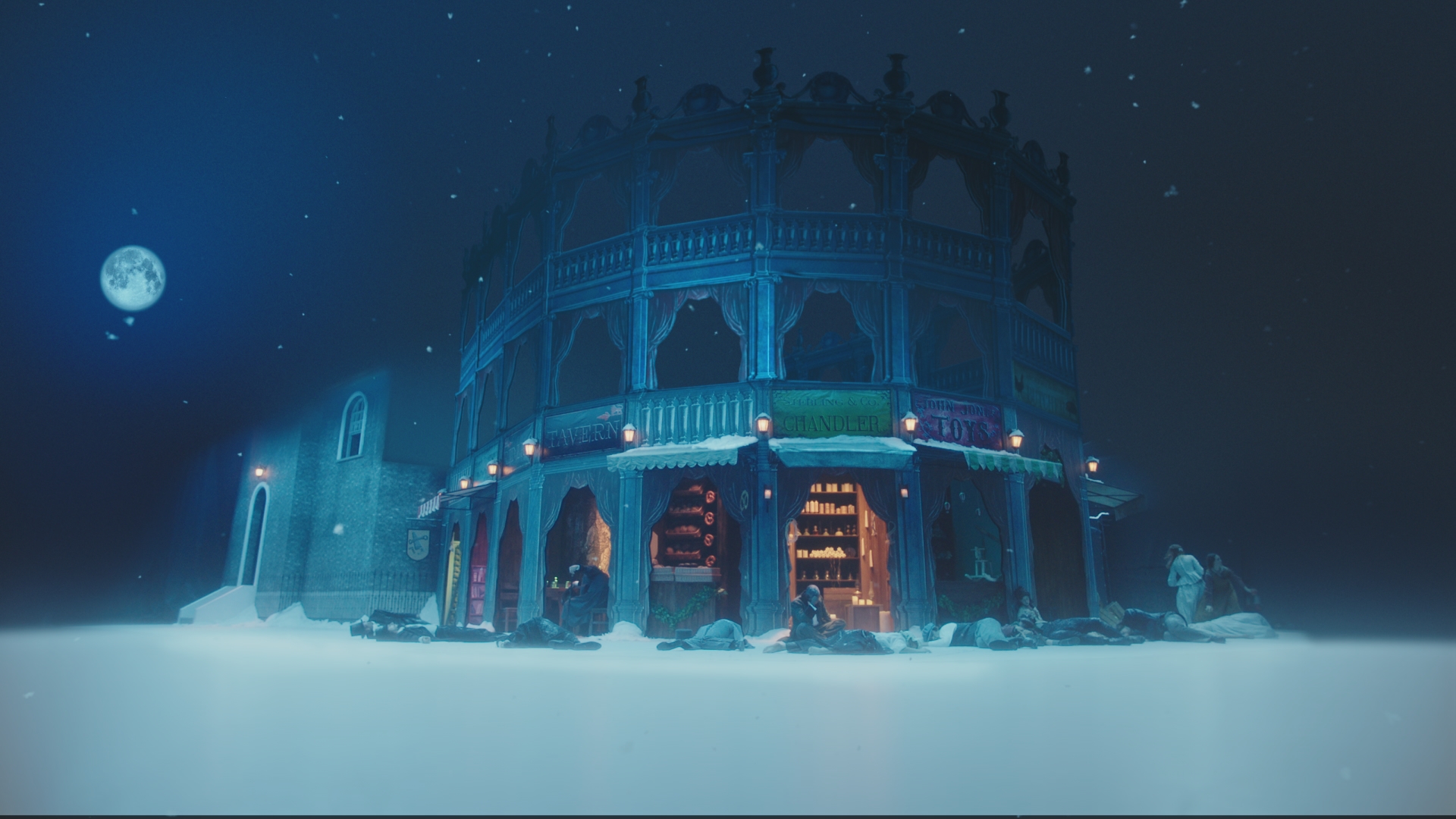 So far, so familiar. Where the production diverges from the many other adaptations (though its perhaps most in keeping with Steven Knight’s 2019 BBC fantasy miniseries) is in the narration and movement, which is so mesmeric and immersive that it’s easy to become swept up in the ghostly, festive magic. The cast, played by dancers, move through the scenes, matching the narration so perfectly that you could fool yourself into believing that they’re the ones speaking. They twirl and bend and contort to the words, bringing a physical, bodily meaning to the story that could only come with dance. It’s most impressive when we first enter the story and motionless dancers rise from the snow-covered street like the dead come to life. In a world where everything is big and brash and loud, there’s a quiet, intense physicality to this production that really strikes a chord.

The narrators – including Simon Russell Beale, Martin Freeman, Carey Mulligan, Daniel Kaluuya and Andy Serkis – add a seasoned gravitas to the spoken story, but it’s the set design and cinematography that’s truly something to marvel at. The camera dances alongside the performers, moving through Victorian streets and Scrooge’s grand, solitary house, such a contrast to the meagre but happy home of Bob Cratchit. We witness the wealth and the poverty that sets people apart, the joy that comes from love and family even when you have very little else, and the misery that comes from greed. In this, the true message of Dickens’ story shines through. Like Scrooge, we’re reminded to honour Christmas in our hearts, and try to keep it all the year – a sentiment that feels all the more relevant after the year we’ve had.

A Christmas Carol is in cinemas and theatres from 4 December. Click here for locations and tickets.

The best black and white films now in colour

9 Festive Reads For The Christmas Season