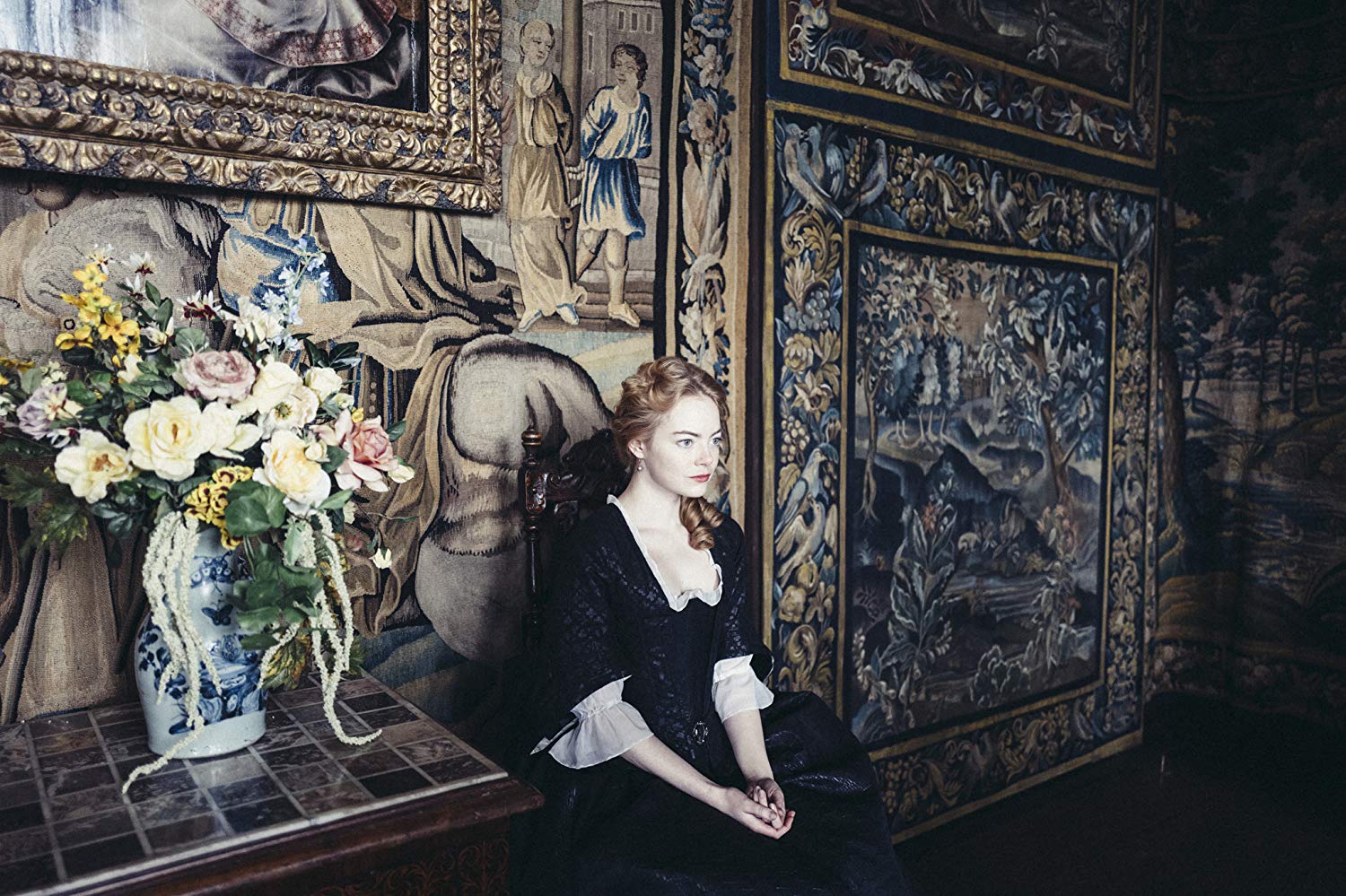 When the trailer for Yorgos Lanthimos’ The Favourite was first released it seemed a perfect match. His direct, clipped use of language, the carefully constructed tableaux’s and the awkward, uncomfortable atmosphere is perfectly suited to the grand, opulent pretentiousness of the 18th Century monarchy. The Favourite is exquisitely mounted with a central three-way dynamic that couldn’t be more precisely tuned to accentuate the best of Lanthimos’ style. After The Killing of a Sacred Deer and The Lobster won plaudits for their unique tone, the change of scale and shift to a period setting may have proven challenging. Instead, The Favourite is Yorgos Lanthimos at his finest.

Based on the relationship between Queen Anne (Olivia Colman), Sarah Churchill (Rachel Weisz) and Abigail Masham (Emma Stone), the vast majority of the film takes place in an enormous royal house (shot on location at Hatfield House in Hertfordshire). Queen Anne, in a sensitively nuanced and sublimely bonkers turn from Colman, is clearly unsuited for her role as Queen of country. She relies on Lady Sarah to direct her on most political matters. Abigail, young and feisty, arrives on the bottom rung, assisting the maids downstairs. A relative of Lady Sarah, Abigail manages to slowly work her way through the ranks and spies on Anne and Sarah when they are locked in an intimate moment. She uses it to her advantage and between game shooting, rubbing legs and cups of tea, Abigail becomes ever closer to Queen Anne and Lady Sarah becomes further isolated and detached.

Rachel Weisz, as Lady Sarah, is direct and cold, curtly informing the Queen how she looks like a badger. Then, in a gentle gallop together, she can be tender and loving. It is a complex role that Weisz manages to expertly portray. There is a nagging unease when Emma Stone’s Abigail arrives and, as the compelling woman reveals her true intentions, the conflict between Weisz and Stone becomes electric. But it is Olivia Colman who delivers a scene-stealing, powerhouse performance. Buried in grief for the many children she has lost, her obsession with rabbits and the childish, loopy demeanour is thoroughly convincing and never too much for a character that could easily slip into awkward eccentricities. 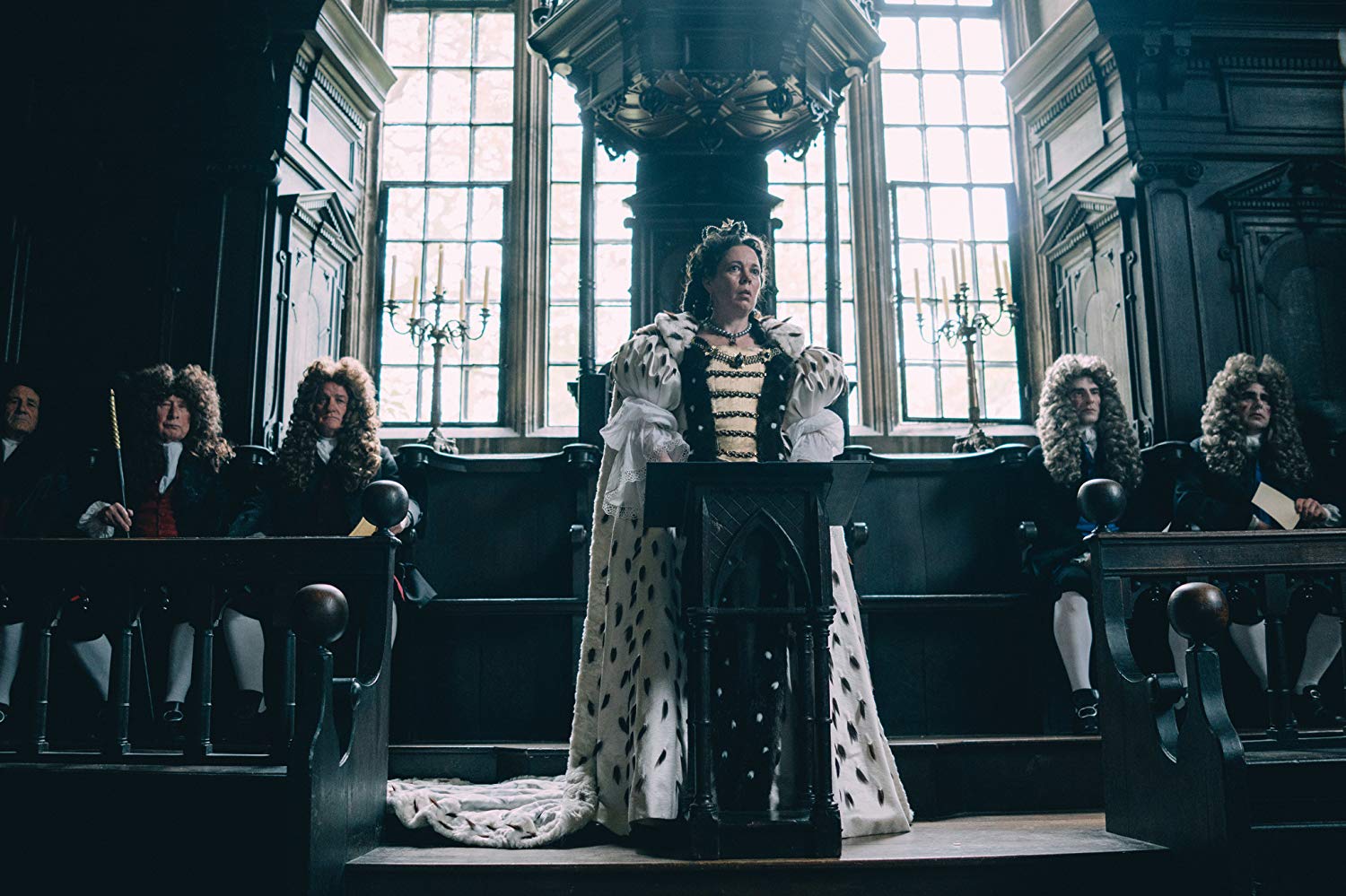 When establishing Queen Anne and Lady Sarah, we see her gift Sarah with a palace – what would become Blenheim Palace. When the film opens, dominating strings blast onto the soundtrack (a collection of classical and contemporary composers feature including Bach, Handel, Messiaen and Meredith). Queen Anne, in an enormous gown with a train that follows, stands with the vast room around her and the garden out the window ahead. Peculiar geese-racing, and excessive, greasy food covers the table. Every man, including A Single Man’s Nicholas Hoult and The Thick of It’s James Smith, are all flouncy fools who are desperate to sway Queen Anne’s favour. Lanthimos employs fish eye lenses that spread the grand spaces even wider. There is a sense that, while we can discuss the 18th Century time period, the mockery reaches further than that and, particularly, at the affluence and excess that any monarchy or billionaire family may enjoy.

Steeped in deep shadow and dressed in breath-taking gowns and wigs, there is a quality to The Favourite that is only possible with the cinematography of Robbie Ryan and the visually arresting costume-design of Sandy Powell. But Lanthimos’ unmistakable deadpan humour and direction of shooting is what overshadows the entire film. Fans of Dogtooth and The Lobster will be happy to know that there is a dance number in The Favourite that will be remembered for years to come. A rich treat for the eye, a stirring grand soundtrack and a collection of actors who all bring their “A game” makes The Favourite one of the best films of the year.