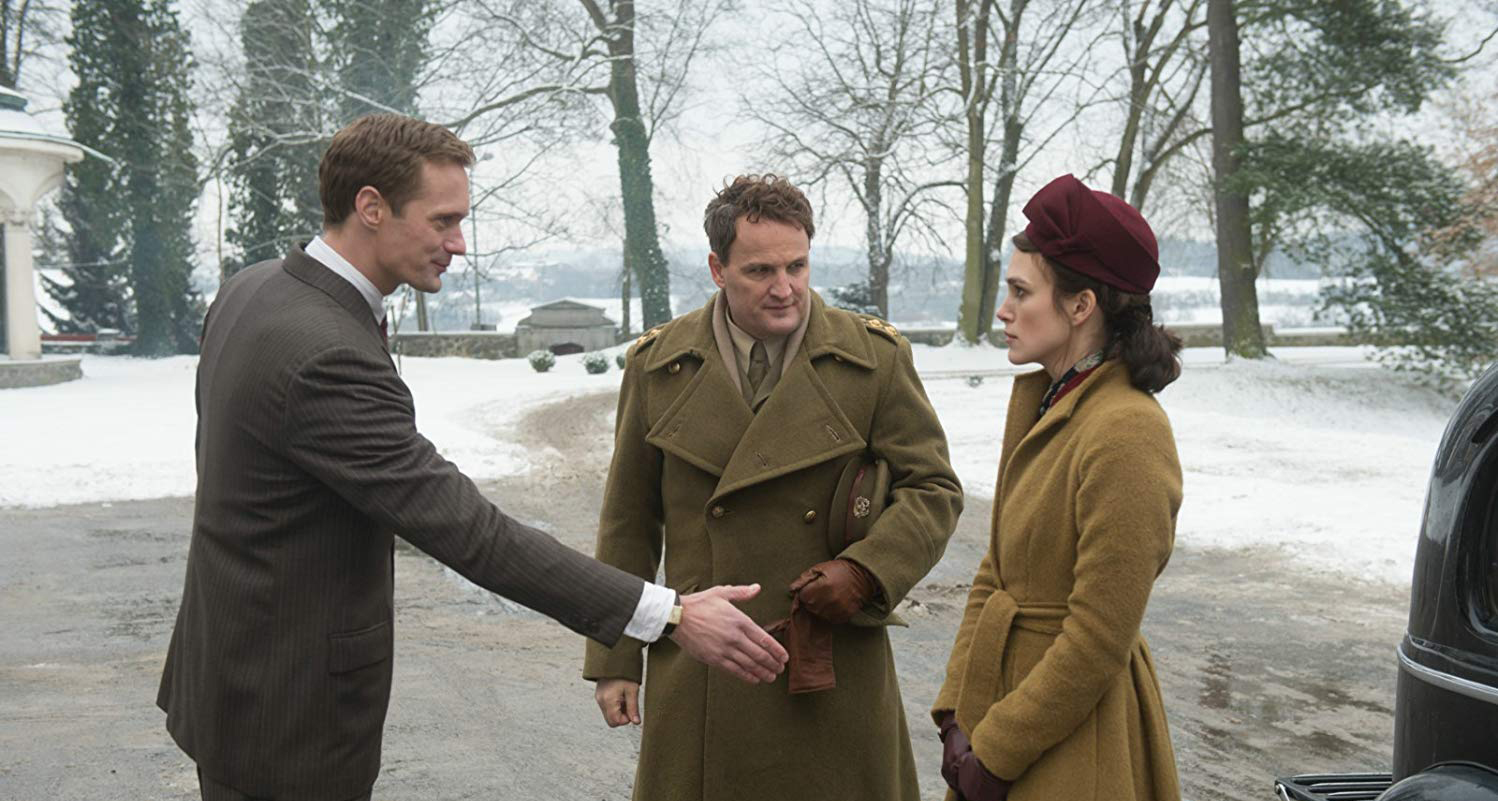 It’s five months after the Allied victory over Germany and Britain is helping to rebuild a shattered country. Rachael (Keira Knightley) has travelled by train to Hamburg, where she’s joining her husband, Colonel Lewis Morgan (Jason Clarke). It’s a slightly awkward reunion between a couple who’ve been apart for a significant amount of time, and it only gets worse when Lewis takes Rachael back to the palatial house they’ll be living in. Not only are there German servants, whom Rachael can’t converse with because they don’t speak English and she doesn’t speak German, but the previous owner of the house – German widower Stephen (Alexander Skarsgård) and his daughter Freda (Flora Thiemann) – have yet to move out.

Seeing first-hand the poverty and destruction in the aftermath of war, Lewis – a fair colonel and a compassionate man – decides to let Stephen and Freda stay in what was once their home, much to Rachael’s disbelief. She considers all Germans as the enemy because that’s what she’s been told, and not wanting to “fraternise” with them, she relegates Stephen and Freda to the top floor of the house. With riots, killings and general discord taking place across the city, Lewis’ time and attention is frequently elsewhere. So it’s almost inevitable when the tense atmosphere between Rachael and Stephen bubbles over into a lust fuelled by their respective loneliness and loss.

James Kent’s The Aftermath walks a tightrope between forbidden love story and wartime period drama, with varying success. The historical and political side of the story is, frustratingly, barely touched upon, whilst the passionate affair between Rachael and Stephen plays out almost exactly as you’d expect it to. Rachael craves her husband’s time but Lewis is too busy trying to stop protests and help starving people. Stephen, on the other hand, gives Rachael his full, undivided attention. He’s a reassuring, easy-on-the-eye presence in an unfamiliar place; someone to quite literally hold her whilst she cries. 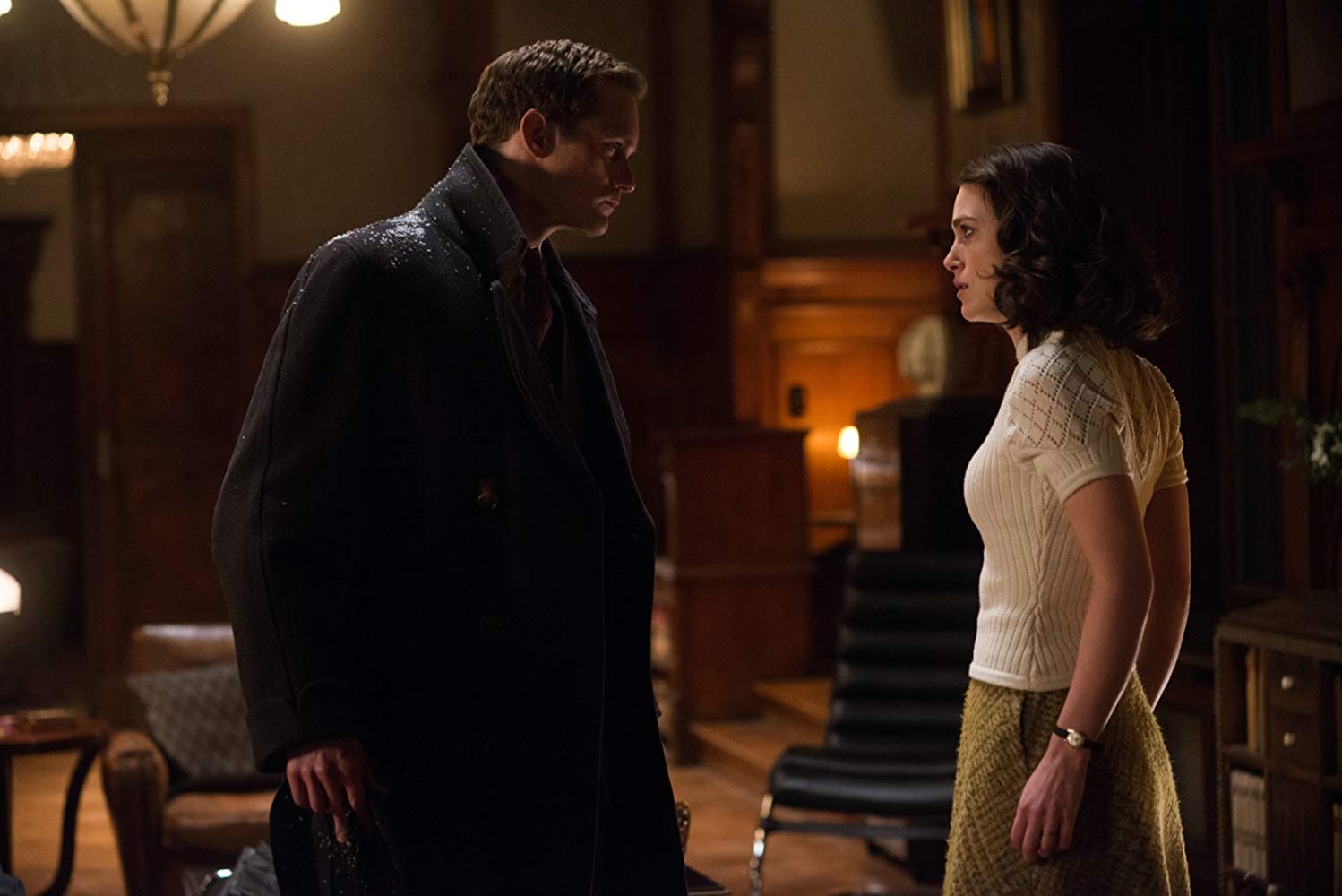 It’s obvious from the moment we meet Stephen that we’re supposed to fall for him like Rachael does. He’s against the Nazi regime. He pines for his dead wife. He chops wood like a hunky, outdoorsy lumberjack. How was Rachael ever supposed to resist such a good, strong, decent man? The problem is, there’s no subtle build-up or slow-burning passion. Just a load of intense looks masquerading as animosity. We know from the moment Stephen and Rachael meet that they’re going to have an affair and it kills the anticipation. What also stops this from being the epic love story it so aspires to be is the stilted, uninspired dialogue that does nothing to alleviate the predictable paint-by-numbers romance.

However, as a drama about a couple shattered by grief, it’s much more nuanced. As Rachael and Lewis reminisce over happier times, the shadow of war and what they’ve lost is never far behind. Lewis keeps himself constantly busy, whilst Rachael’s standoffishness masks her anguish. When in the company of the household staff, she holds herself together with an uptight aloofness that borders on rude. It’s a deep, unfathomable grief that crashes out of her when she’s alone. A scene where she sits in a bath, biting back her tears whilst her husband helplessly watches from the doorway only lasts a few minutes but it’s quietly devastating. 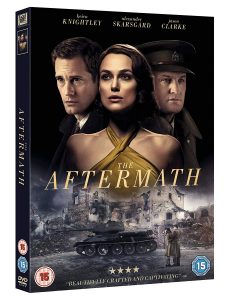 The romance might fall flat and the history might be fleeting, but the performances are exceptional. Clarke plays Lewis with a resigned sense of defeat. He’s world weary, beaten by all the terrible things he’s seen during the war, and there’s just no fight left in him, even when it comes to fighting for his wife. Skarsgård has the intense stare down to a T, exuding an easy charm and dignity in the face of being ousted from his own home. Yet it’s Knightley who steals the show as a woman desperate to feel something other than heartache and guilt. You might not agree with her betrayal but you can empathise with her all the way because of Knightley’s restrained, heart-rending performance.

Sophisticated production values and a magnetic performance from Knightley are the film’s saving grace, making The Aftermath a diverting wartime romance with plenty of dramatic heart.

The Aftermath is available on Blu-ray, DVD and VOD from 8 July 2019