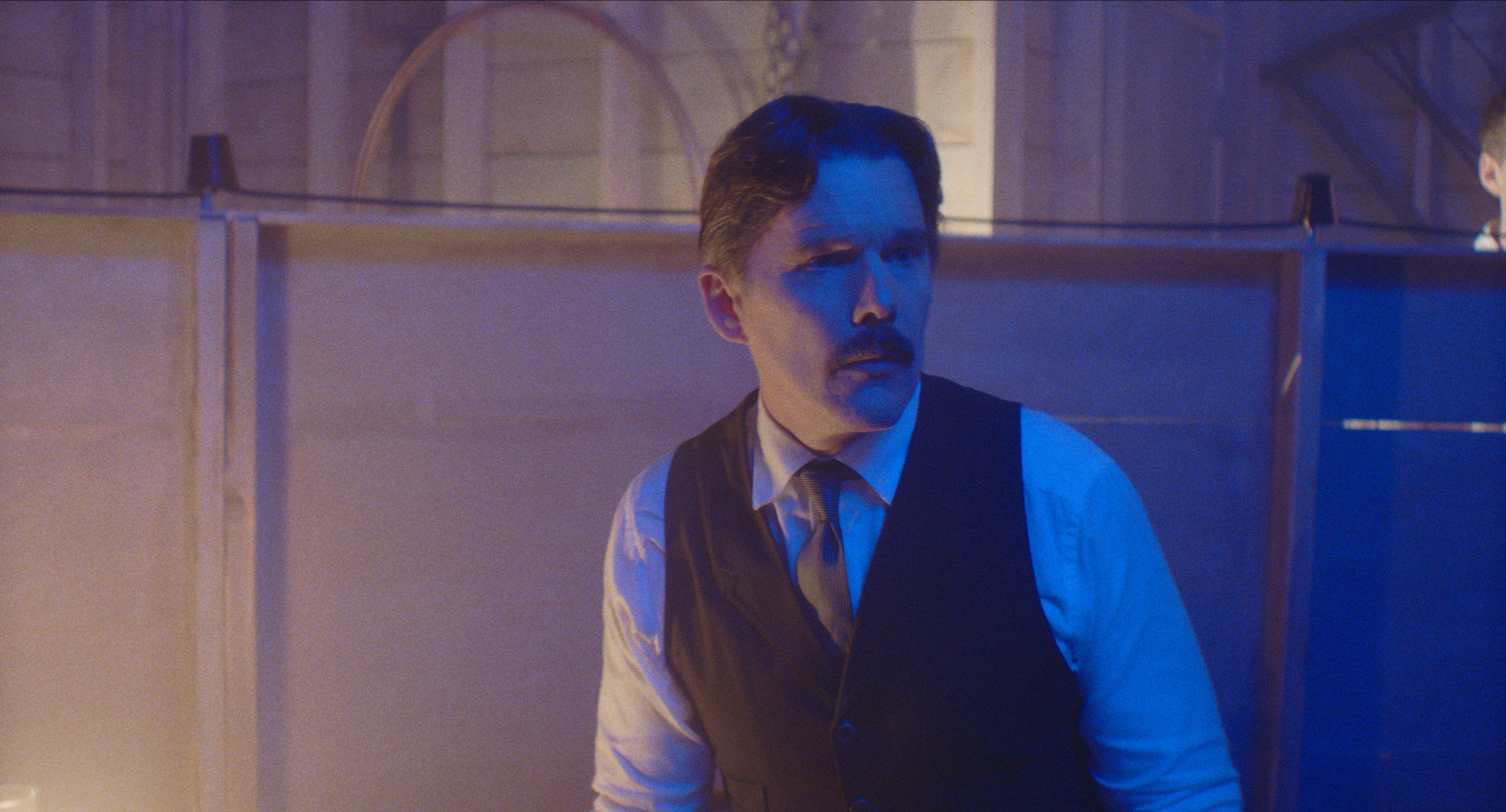 Biopics. Always heavily garlanded – it’s a rare year at the Oscars where you don’t see one or two taking home a little golden statue – but artistically? They’re a loaf of white bread. Inoffensive and unchallenging. Crowd-pleasing. The sort of thing you could watch with your gran and know that, whilst you might find it boring, at least she’ll have a good time.

When you find an innovative biopic – and though they’re in the minority, there are innovative biopics – it demands your attention. Tesla demands your attention. The titular inventor (well, as the film explains, more of a harnesser) of AC electricity is played by Ethan Hawke. Kyle MacLachlan plays his rival, Thomas Edison. Eve Hewson is Ann Morgan, who serves as both a love interest for the largely disinterested Tesla, and the film’s narrator.

Her narration sets Tesla apart from its biopic brethren: it’s delivered straight to camera and addressed to us, the twenty-first century audience. When she explains the characters’ backstories, she uses Google Image results as a measure of their enduring fame. Tesla isn’t just unafraid of anachronisms, it embraces them. On one end of the spectrum, after a few scenes – the most entertaining being a fight involving Tesla, Edison, and a couple of ice cream cones – Ann tells us that what we’ve seen didn’t actually happen. On the other end, you have Tesla performing karaoke to Tears For Fears’ ‘Everybody Wants To Rule The World’. It’s safe to say that this is a movie unconcerned with following biopic conventions. 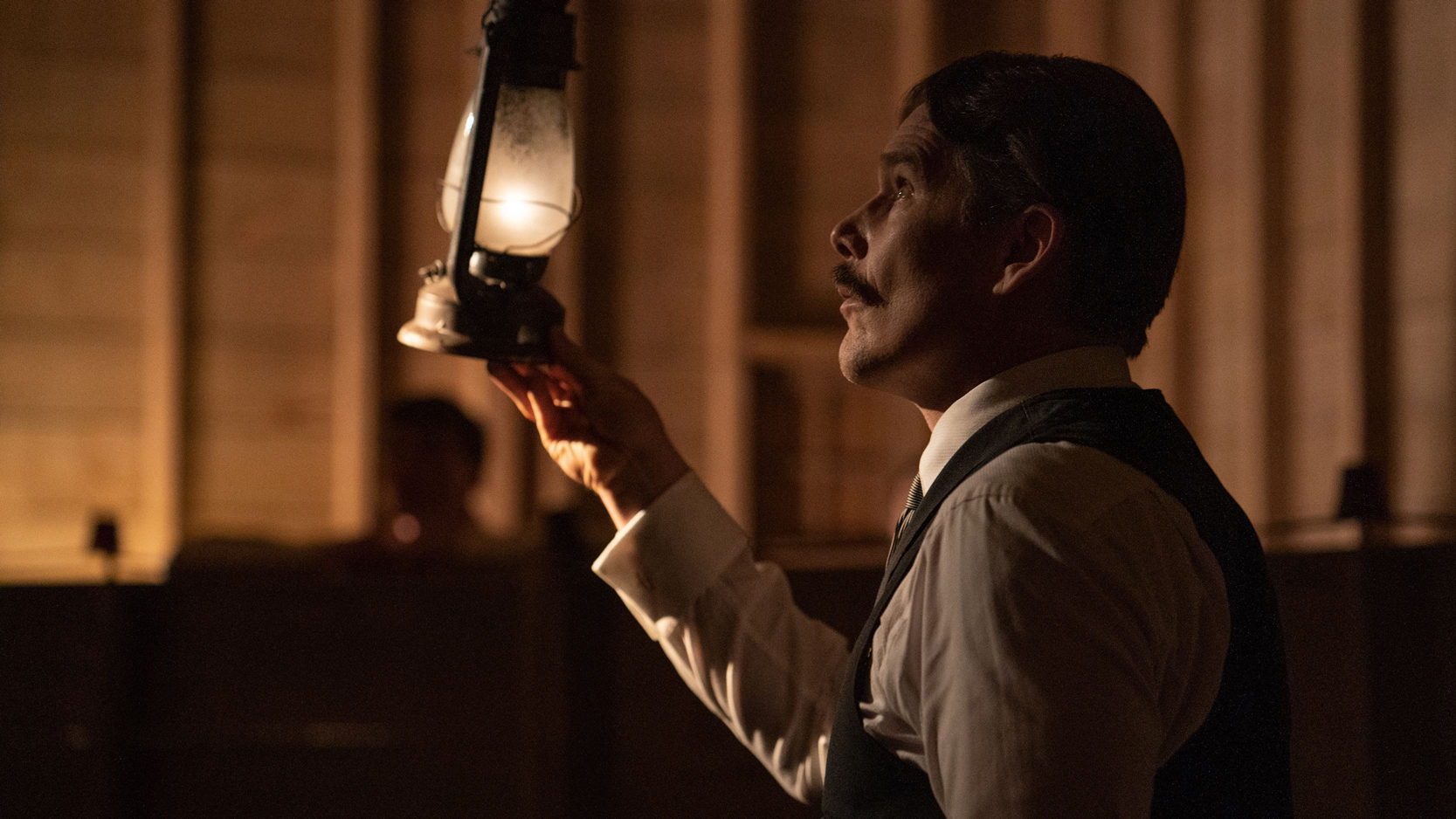 The question is, however: do these cinematic eccentricities work? Well, yes and no. Biopics are always concerned with the legacy of their subject; in some ways, it’s refreshing that Tesla is so forthright about it (although you could argue there’s an overreliance on the modern gimmicks). Then again, when you pair the constant narration with dialogue that already tends towards the prolix, the result is an awful lot of talking. Somewhere between the lengthy monologues and even lengthier explanatory voiceovers, it would have been nice if writer/director Michael Almereyda had factored in some time to let the audience, and these characters, breathe. The unrelenting density of verbiage can make some sections hard to follow, which is a shame when one would imagine that the whole point of the narration was to help the viewer out.

As usual, Ethan Hawke’s performance is unassailable. Well, okay, his accent isn’t. It’s almost laughably inconsistent; shifting from an even gruffer version of his own American growl at some points, to English at others, and only occasionally opting for a go at something approximating Tesla’s native Serbian. Still, he brings a real magnetism to Tesla, his innate quietness, and the intense discomfort he feels around other people – it makes a fascinating contrast with Kyle MacLachlan’s gregarious Edison. It’s a shame they share just a handful of scenes.

Between the hyper-verbosity, the overabundance of anachronistic tricks, and Ethan Hawke’s wandering accent, Tesla is a bit of a mess; albeit an innovative, tremendously watchable one. At least no one could accuse it of conventionality.

Tesla is on Digital Download 21 September from Lionsgate UK