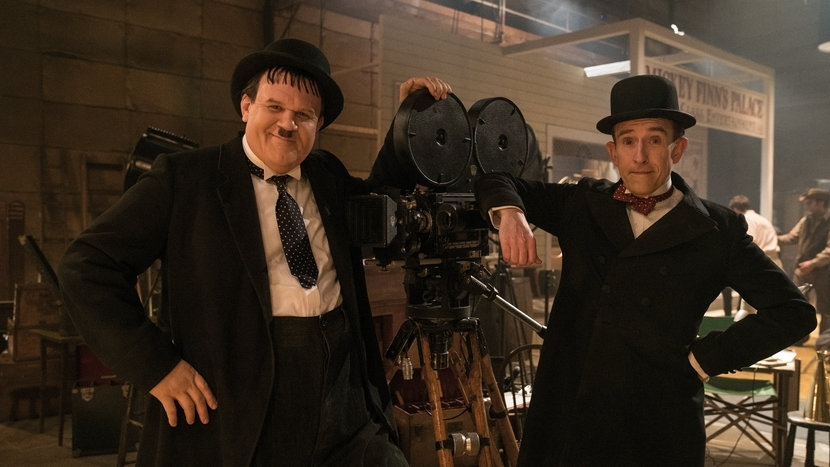 Stan & Ollie depends on the strength of Steve Coogan and John C. Reilly. Recreating the iconic duo and building a film around their final tour, acting out their most famous skits, is dependent on convincing us that they are Laurel & Hardy. Jon S. Baird’s dramedy satisfyingly delivers on this front with Coogan and Reilly in mesmerising top form. Between the initial flashbacks of the peak of their career through to comedic japes as they struggle with luggage and doors, this is a fulfilling, warm and tender portrayal that can only provide an excuse to re-watch their unforgettable films.

Stan Laurel and Oliver Hardy are Hollywood’s most successful actors in 1937. They think of girls too much and wonder whether they could be paid a little bit more because, unlike Chaplin, they don’t own the rights to their films. The story then begins with purpose sixteen years later. Since 1937, their star has fallen and between divorces, gambling and ill-advised career moves, the lads are struggling to make ends meet. This tour of Britain, finishing with a Robin Hood movie deal that Stan is writing, is what will make all the difference. As Laurel says, they are “no spring chickens” anymore and the effort for Hardy in particular is beginning to take the strain.

When Stan & Ollie begins, as sprightly, twee music plays over the credits that are displayed on a red curtain, a worry sets in. This could be a cheap and tacky affair, with impressionists in a cliché biopic that primarily relies on your love of Laurel & Hardy to keep you engaged. But Baird’s direction from the very start sets your mind at rest. In a single shot, the duo prepares for Way Out West, walk through the studio lot and make small talk with their colleagues and coo at the women. “Hello girls”, says Hardy in his identifiable Georgia accent. Immediately, the pair are likeable and believable. Their larks and playful relationship, when not in conflict, is a joy to watch. Halfway through the film, as the tour begins to affect their attitudes towards each other, their wives Lucille (Shirley Henderson) and Ida (Nina Arianda) appear, and add an energy and momentum to entertain you further. Even their agent, Mr Delfont (Rufus Hound), is slyly charismatic and manages to make a few crackers in his own sneaky manner.

Grounding the film in the early fifties, we are constantly made aware of the British comics of the time. The large theatre halls selling out Norman Wisdom while Abbot and Costello are releasing movies are a constant source of frustration to Stan but it reminds us of the ever-changing comedy scene. From the Savoy to the Lyceum, these well-known locations cement Stan & Laurel in a Britain we recognise immediately. While the knowledge of comics and the sadness behind their craft is alluded to, it is not explicit. Stan desperately wants to rekindle the magic from their heyday while Hardy has grown in size, with deteriorating health and an affinity for a little gambling on the side. But Stan & Ollie refuses to venture down a controversial route and actively aims to celebrate their achievement in a way that, at points in the film, is not the case.

Stan & Ollie successfully scratches our urge to imagine what they may have been like at this point in their career. There is a genuine chemistry between Steve Coogan and John C. Reilly with carefully recreated moments combined with the delicacy of incidental details. Though a safe, celebratory work of cinema, it is charming, fascinating fare with satisfying sight gags and slapstick jokes that still tickle all these years later. Stan & Ollie is an elegant, affectionate portrait that pleasantly showcases the very best of British filmmaking.