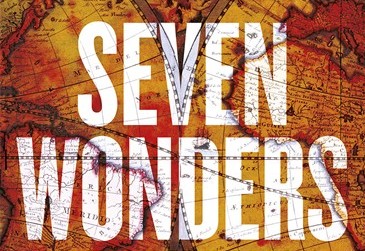 A Walk Among The Tombstones Review 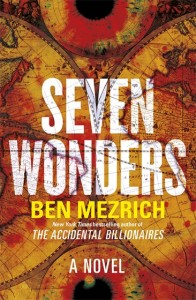 Seven Wonders is the type of thriller that grabs you by the scruff of the neck and takes no prisoners. Ben Mezrich is an author whose skill for weaving imaginative and often insane adventures kept me riveted to the very last page.

I was hooked from the first chapter when Jeremy Grady, a reclusive mathematician, stumbles upon something that doesn’t seem quite right, and his obsessive mind begins to search for connections. Jeremy is fuelled by a recent meeting with his estranged twin brother Jack, a thrill seeking extrovert and anthropology fellow at Princetown, who mentions an ancient and modern set of Seven Wonders.

Comparing these ‘Wonders’ in an underground security lab gives Jeremy the necessary access to satellite data and, whilst toying with various maps, latitudes and longitudes using the sophisticated equipment, he soon discovers the impossible. At the precise moment he is storing the seemingly impossible information into his thumb drive, he is ruthlessly murdered. With his dying breath, Jeremy musters the strength to leave behind a clue, niftily hidden to all but one person.

When Jack is informed of his brother’s murder, he’s making what could well be the discovery of his career deep within one of the Seven Wonders of the ancient world. Returning to America he undergoes hours of police questioning and has the gruesome task of identifying Jeremy’s body. Shocked and angered by the murder inflicted on his twin, he vows to channel his anger positively and uses his cunning to find a way to explore the police-sealed crime scene. Once inside the secure lab he searches for vital clues and, by chance, a glinting object in a tagged evidence bag catches his attention, leading him to discover Jeremy’s hidden clue. Instinct tells him to believe that Jeremy must have left the clue in such an exact place so only his brother would find it, and so Jack embarks on a search to find out why his brother was killed.

The search takes Jack on an incredible journey around Brazil, India, Peru, China and beyond. He slowly unravels the secret codes and mysteries linking the Seven Wonders of the World, and in doing so realises that his brother had discovered something that may have been deliberately hidden for hundreds of years. He enlists the help of the cool and very capable botanical geneticist, Sloane Costa. With her scientific expertise they unearth the conspiracy to hide a roadmap to the Garden of Eden and reveal what lay behind the mythological ancient culture.

Mezrich writes with a relentless urgency and I found myself imagining Jack Grady as a modern day mix of Indiana Jones (think Raiders of the Lost Ark and the pit of vipers) for the adventure factor, and Jason Bourne for his insanely fast-paced action and near-death scrapes. Add into the blend a few fearsome Amazonian, ninja-style female warriors and you get a good idea of how crazy and fast-moving this thriller really is.

I was excited to discover that Seven Wonders is the first book in a trilogy and I can’t wait for the second book in the series. A cracking read!