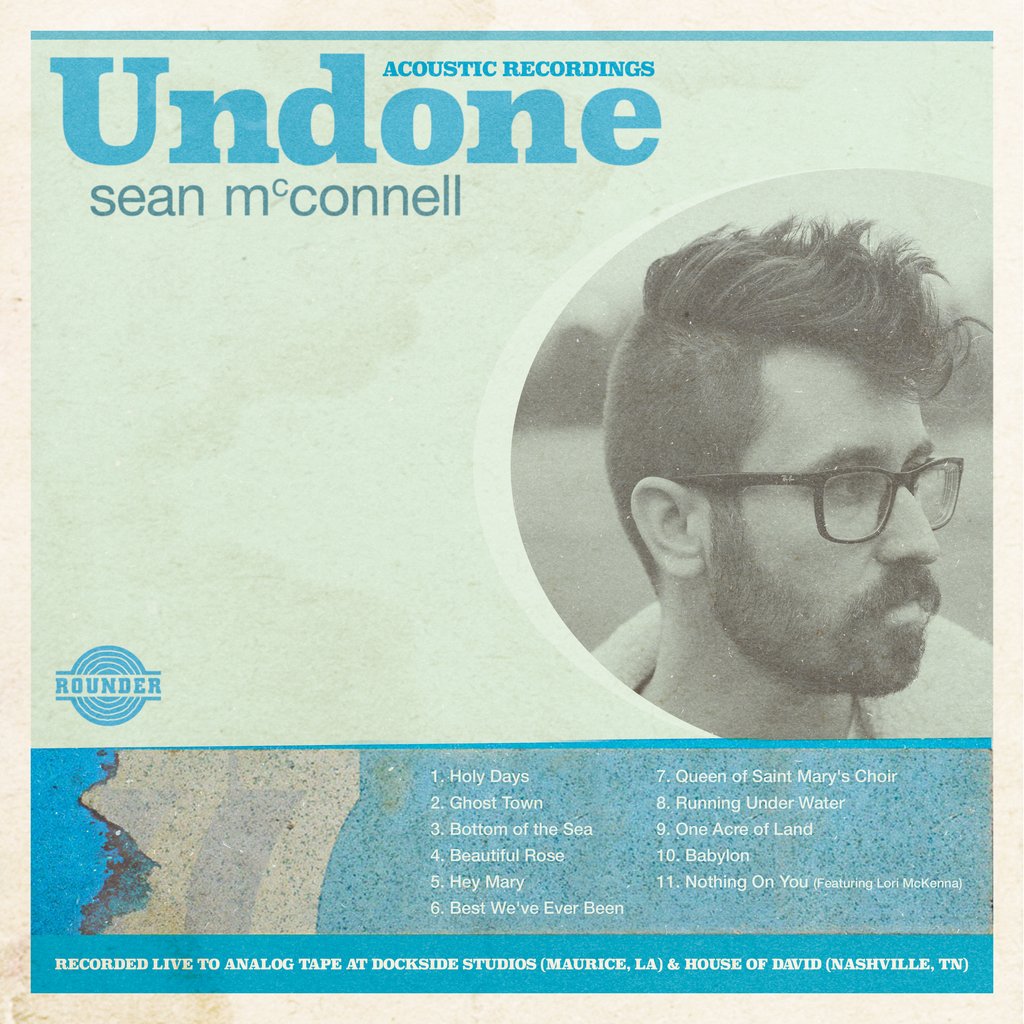 The world of Americana should come with a warning for those brave souls trying to carve out a niche in its familiar halls: ‘here be giants’. Springsteen, Dylan, Guthrie, Haggard, Jennings. How do you make your mark when behemoths like these are prowling the horizon?

For Sean McConnell, the answer came partly in the form of writing for others – during a stint at Warner-Chappell, he penned songs for Tim McGraw, Brad Paisley and Meat Loaf, among others. That mountain climbed, he also released a string of solo albums in his own voice, culminating in an eponymous collection of originals last year, a sturdy, pop-tinged country-folk offering that was clearly destined for US mainstream radio from its earliest days.

Undone is an acoustic reworking of those songs, taking McConnell into skronky, two-bit bar territory – the lone balladeer on his lil’ wooden stage. The reverse makeover works well – the songs come into their own in this stripped-back setting, and McConnell’s pure, high voice is given freedom to soar. There is something a little mismatched about that voice and this musical style, though. He skates awfully close to a radio-pop whine at times, while the backwoods guitar cries out for a gravelly drawl.

Nevertheless, there’s an engaging quality to the songs – they’re straightforward but deep, and McConnell has a real way with words. ‘Queen of St Mary’s Choir’ in particular benefits from some beautiful couplets and a touching portrayal of young love. I’ve never even been to the states, let alone spent years kicking around the dustbowls of Texas, but Undone prompts nostalgia for a golden age of true-blue American provincialism. You can almost see the whippoorwills, the cornfields, the Guadalupe delta, the sun setting over the barn…

For the most part, this is a peaceful album, one for reminiscing to. It’s wistful and gentle. It enjoys remembering lost loves and has a wry smile for the youthful escapades of country boys ‘bumming cigarettes’. On ‘Babylon’, though, McConnell turns his gaze on the political chaos of 2016 and laments the decay of public responsibility, asking ‘where did we go wrong?’ (Hint: when you voted for the bewigged Cheeto.)

It makes for a powerful sting in the tail, providing a counterpoint to the rosy glow of the cultural past laid out in ‘Nothing On You’ – Springsteen singing Thunder Road, catching a Greyhound to Graceland… It suggests that there might not be a future version of this album, that the singers of 2057 might not have a nostalgia to call upon if the present tensions cannot be tamed.

To return to the opening question – does McConnell make a mark in the presence of the giants? In terms of breaking new ground or penning the next ‘Like a Rolling Stone’, the answer is no. The twin paths of country rebellion and nostalgia are too well-trodden to allow for new heroes.

But in terms of authenticity and heart – if we’re asking whether McConell is believable, a real American Songbook writer – the outlook is much brighter. There’s an undeniable earthiness to Undone, a connection to the dusty prairie. McConnell may not be destined for ubiquitous T-shirt fame, but here he has produced a worthy addition to the venerable canon of Americana.

Undone is released on 8 September via Rounder Records