Riverdale marked the launch of the newest version of Archie Comics, the long running, wholesome, kids comic strip. It is a carefully crafted new show with interesting characters and a rapid episode that establishes numerous plotlines without boring you. We’ll have to wait and see if they can maintain their own mystery and to see what choices they make with their new, more millennial versions of these characters, but as an opening it’s quite entertaining.

Though Archie and friends have made the leap to TV before, both in animation and live action, as Riverdale is, this latest iteration comes to the CW (or Netflix in the UK) with a dark and mysterious new dimension. The show is squarely aimed at fans of the CW’s other hit list shows – Gossip Girl, The Flash and iZombie – and looks to capture the high school drama spirit that was so popular with teens in the 90s and 00s. However, it also merges this soap style with the popularity of darker themed shows that modern teens adore, such as The Vampire Diaries and Pretty Little Liars. It’s a teen drama with teeth, or at least that’s the aim.

Episode 1 opens with the calm voice of the as yet unknown narrator; like a movie trailer we close in on details of the town – a sign, the lapping waters of the river – then pull back to wide establishing shots of streets and the key town locations. Our narrator explains that the small town might not look like much, but it’s about to be rocked at its very foundations. The mystery begins.

The imagery is glossy and sharp but dark and moody. We follow the local twins, Jason and Cheryl Blossom (Madeline Petsch), with their lily-white outfits, which contrast with the dark, grey scenes of the rest of the episode. As they climb into a small rowing boat on Sweetwater Lake, the opening scene tells of Jason’s apparent death, using imagery that is more haunting and eerie than you might expect. 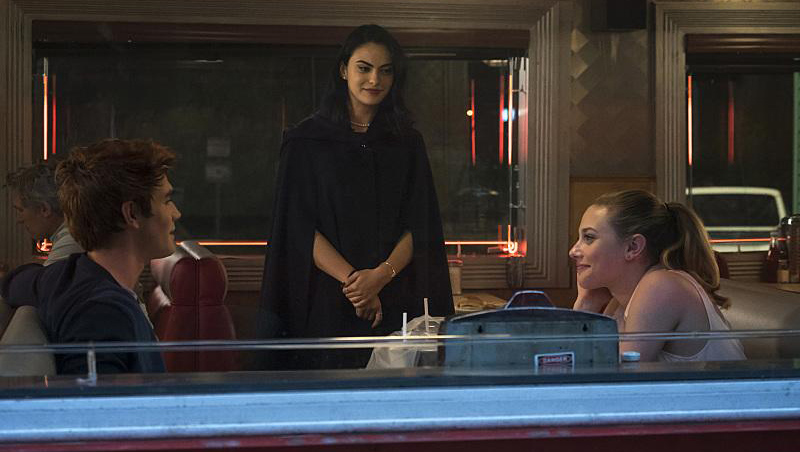 We soon find out that during the boat trip something went wrong and Cheryl is the only survivor; her dearly beloved brother believed drowned in the river. Yet his body can’t be found. We’re then introduced one by one to our main characters. While Archie (K. J. Apa) may be the lead in his comic strip, he’s not the first character we’re introduced to, or even the second or third.

Instead we meet blonde Betty Cooper (Lil Reinhart), the pill prescribed daughter who pines for her best friend and next-door neighbour, Archie, and Kevin (Casey Cott), Archie Comics first openly gay character. You get hints of the humble comic beginnings of the characters in the dialogue, which is sweet, such as when Kevin describes Archie as “swell”. But we’re clearly established in the modern day with mentions of millennials. At times the dialogue sounds like it’s trying to hard for tween speak, but not often enough to be irritating, just funny.

While Kevin wants Betty to make her feelings known to Archie, Betty feels unsure, despite her adoration. We’re then treated to the eye-candy view of Archie at his window pulling a shirt over his muscular body. It just wouldn’t be a teen show without a miraculously muscular, handsome and spot free teen heartthrob to ogle. One of the aspects we’re constantly reminded about in this episode – and hopefully just this episode – is that Archie completed puberty over the summer, turning into an Adonis that no-one can avoid commenting on. Like, literally, everyone talks about how many muscles he has, throughout. An actual quote: “Archie got hot! He’s got abs now!” Apparently all it takes is a few months working construction, “pouring cement” (and tremendous genes), to become ripped.

Riverdale’s first episode starts by portraying Archie through the lens of others and so it becomes difficult to know how to feel about him. Through his various relationships we quickly get a better idea of the parts of his personality: he’s a jock, but doesn’t quite rise to the banter of his peers. He never acts self aware of his body and the advantages it gives him in a high school setting. He has a polite nervousness that speaks to his small town upbringing. When he reveals, by lying to both his father and coach, that he would rather pursue music than a sports scholarship and business school, he doesn’t have the aching desperation that could make it seem too contrived. 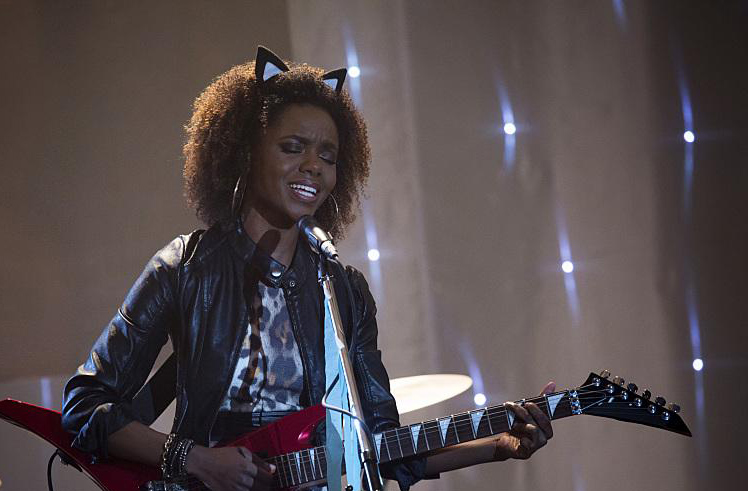 In one scene, which in itself is a bit odd, we see Archie approaching Josie and the Pussycats; a trio of musicians in the comics. Josie and her fellow cat-ear wearing bandmates are confrontational with Archie when he approaches them; he seems to be seeking music advice but can’t get his words out. We may learn that there is some history there, but Josie acts oddly hostile to him and waves him away thinking he’s trying to get them to sing his songs.

This leads Archie to turn to the school music teacher for help pursuing this new passion, a more logical move perhaps. Unfortunately, Miss Grundy (I mean, that name), who is a very young teacher and questionably dressed in what can only be described as the stereotypical Halloween costume for ‘sexy librarian’, is avoiding him. During an assembly, Archie stares at the teacher, who turns back dramatically and hesitantly locks eyes with him. We learn, through flashback, that this uptight dressing teacher actually had a romantic/sexual fling with Archie during the summer break. We can add sex with an older woman to his summer body workout list it seems.

We also see that during summer, Miss Grundy, or Geraldine to Archie, is fond of swapping her glasses for heart-shaped sunglasses and her hair bun for a flowing mane when the mood strikes. She then erotically fondles a straw in her mouth when addressing Archie outside school, undressing him with her eyes, only to suddenly realise during the school hours that it might be inappropriate to act that way to a student. It all feels a bit direct, especially in how she’s dressed for the different scenes.

Later in the episode, before Archie convinces his summer love to teach him about music as an extracurricular, we learn that during the twins boating incident the young couple were also next to Sweetwater Lake and heard a gunshot. Because they couldn’t come forward without revealing their tryst, they’ve kept this information secret from the town.

Betty’s storyline interweaves with Archie’s, as we learn that she’s being medicated under strict instructions from her mother, and that her older sister, Polly, dated Jason the twin. The details are left vague but somehow Polly went from dating Jason to being sectioned, though Betty blames their mother more than Jason. 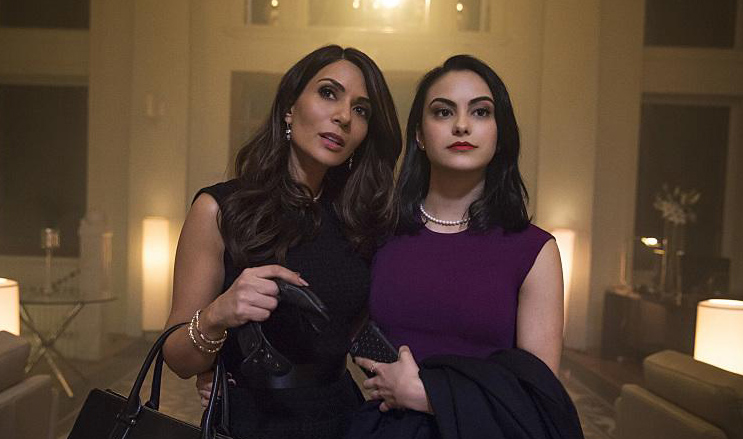 With Archie being such hot property, Betty’s chances of romance are quickly dwindled by the arrival of the third in the core love triangle, Veronica Lodge (Camila Mendes), who, with her mother Alice, has moved to Riverdale just in time for the new school year to start. Veronica is the most Gossip Girl character, coming from a rich family in New York. Her mother is forced to move the two of them to Riverdale, where she is from, since their fortune has been lost due to, *obviousness klaxon*, embezzlement! Will these NY rich types never learn?

Veronica is very self-assured throughout this episode, saying exactly what’s on her mind. She ends up befriending Archie and Betty, who’s her student liaison, and comments to Betty and Kevin in one scene that “I’ve had every flavour of boy except orange” in reference to Archie. Her direct attitude could come across as snobby but it’s clearly been quelled somewhat and she can read a group. She knows Kevin is gay and instantly wants to be his best friend, not entirely for this reason but because she feels a kinship with his outgoing and quippy (read: sassy) personality. We also learn that Veronica is looking to reinvent herself and get away from the problematic mean girl she grew up to be, which she confesses to Betty.

The Archie-Betty-Veronica triangle comes to a head at a party when the group ends up part of a spin the bottle for seven minutes in heaven situation. Archie is selected as one of the pair destined for the closet encounter, or as Cheryl puts it: “let’s see who is riding the ginger stallion tonight”. Veronica is chosen and Betty runs off after the two enter the closet together, fearing the worst since she was knocked back when confessing her feelings to Archie at the dance just before. She’s right to be concerned, as Veronica and Archie start off talking but end up kissing within seven minutes. After emerging and discovering Betty has left, they go in search of her, separately. It’s during this that Archie meets our mysterious narrator, Jughead Jones (Cole Sprouse), who is writing a novel about Jason’s murder, for reasons that are not clear, at all. When asked about Betty, he warns Archie to be honest with her. Archie then finds Betty and tells her he loves her, but not in that way. 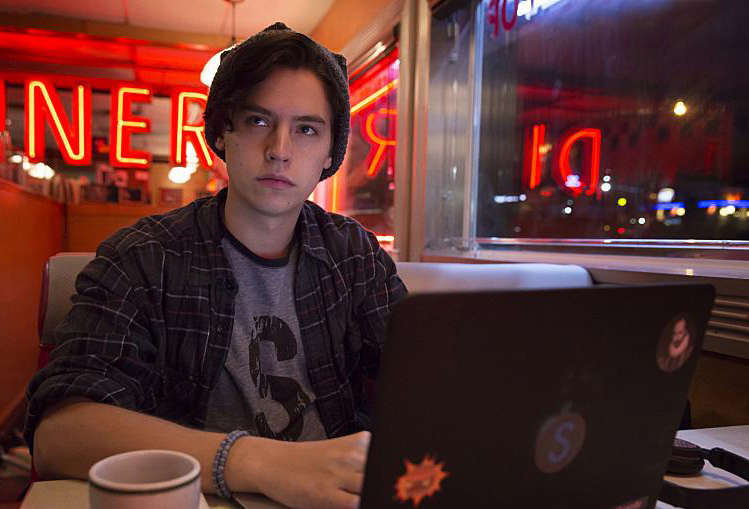 The premiere episode ends with Kevin, who has been on the receiving end of flirtatious remarks from Archie’s jock friend Moose, who insists he’s not gay because he’s on the football team, but happily heads for a nighttime rendezvous with the darling Kevin by the river. Sadly, their skinny dipping adventure is cut short with the discovery of Jason Blossom’s body, his corpse lying on the bank of the river, gunshot would to the head.

Riverdale is far from perfect as a show, and there are some glaringly questionable choices with certain scenes. But it’s bound to pander with some fan fiction stirring fan service for its teen viewers. However, many of the actors and characters are compelling, particularly Archie, Kevin and Veronica – who manages to make her redemption seeking rich girl believable. It also has some funny lines and a good mystery at its core. Thankfully they didn’t focus on did Jason die? But rather, why did he die? Also, it’s almost worth watching solely for the names, which people actually take seriously. I mean, Moose and Jughead? What a world.