There are parents and teachers who want to educate their children on the Peterloo Massacre of 1819. A horrific example of the ruling class letting loose a cavalry with their swords drawn, murdering fifteen people and injuring 400-700 more. A sad, awful story on a par with Bloody Sunday in 1972, Peterloo is an important film that tells a story that has failed to be re-told in cinematic form. Unfortunately, Mike Leigh is the wrong man for the job. Refusing to waste a single shot, Peterloo lingers too long in every possible way. Lacking momentum and loosely connecting a thread of narratives together, Peterloo needs to be tackled again with an added weight that Mike Leigh’s interpretation sadly lacked.

Beginning at Waterloo, a lone trumpeter (David Moorst) blows his horn as explosions and soldiers surround him. Exhausted and suffering, he heads home to his family in Lancashire. Meanwhile, in Parliament, a Lord (Karl Johnson) assigns a returning general (Alastair Mackenzie) to the Northern territory. An unsavoury attitude is brewing and someone needs to sort out the area – a part of England that is looked down upon and openly disregarded. Magistrates throw petty thieves in jail for decades and send another to Australia. Their distaste for the labouring class of Manchester and its surrounding towns is clearly engraved in their mind. Our soldier from the front-line of Waterloo, returning to his home, struggles to find a job and is left to stick with his family who are all in support of a change in Parliament – and for representatives from all over the country to be listened to in Westminster. This change for a democracy that listens to its citizens is supported by Henry Hunt (Rory Kinnear), a dandyish orator, who is collared into speaking at St Peter’s Square in Manchester. A man who is totally against violence ensures that attendees do not carry weapons. The magistrates, on the other hand, have the Yeomanry army ready in waiting and before Hunt even starts, they are told to intervene with tragic, shocking consequences. 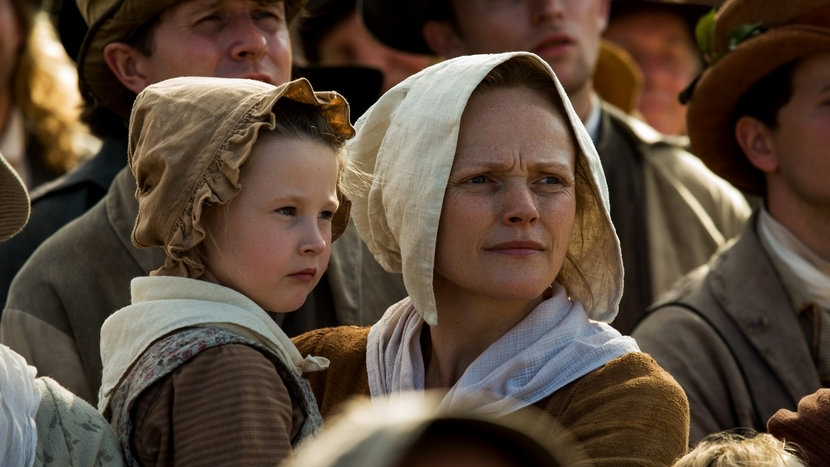 At over two-and-a-half hours long, Peterloo is epic in its scale. As cinematographer, Dick Pope (the visionary behind Mr. Turner) turns the labourer’s houses into Vermeer tableaux’s, with a warm palette and a use of light that oozes the lived-in comfort of home. Maxine Peake (as the trumpeter’s mother) and Rory Kinnear, the headline stars, are underserved with a busy cast elsewhere overshadowing their more subtle touches. Kinnear, in particular, does not even appear for at least thirty minutes. Instead, overly dramatic readings from pantomime villains take over and the speeches of equality, democracy and the future are endless. A speech in a pub; A speech in a field; A speech in London; A speech in the Manchester Female Reform Society. Then, within each location, you may even see two or three speakers at a time. Cut to the disastrously cliché magistrates, all with over-the-top laughs who spit out their words in disgust, over the poorer folk of the North East. At one point, a character says “Time for speaking is over” and, with mounting exasperation, you will feel exactly the same.

Why introduce a soldier who barely appears in the film? Why introduce a general at the very start, who is rarely seen and does not even turn up in Manchester? There seemed to be very little connecting the “fat leeches of London” with the Manchester meetings that you wonder whether the government angle was needed at all. Why even tell the film chronologically? Many viewers (myself included) were unaware of the event and knowing that the story would lead to such a slaughter would at least give a sense of direction.

Peterloo is a wasted opportunity, where bad storytelling loses all the nuance and detail that a sprawling epic could have integrated. Contrived roles within a tiresome narrative leave Peterloo in a desperate spot when it could clearly have been so much more.