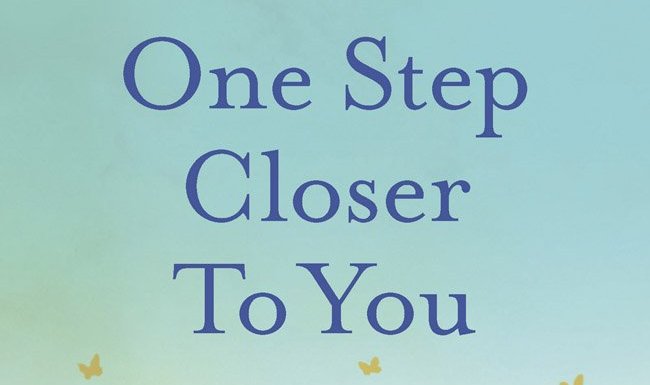 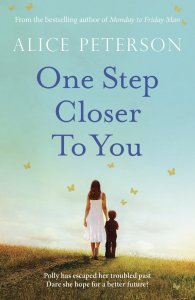 Alice Peterson’s One Step Closer To You definitely grew on me. What began as a mismatch of time jumps, ill-explained issues and blatant plot devices actually developed into a poignant reminder that life doesn’t always go how we want it to, but the only thing we can do when this happens is to do our best to move on. One Step Closer To You tells the story of single mum Polly Stephens battling the demons of her past while raising her son Louis, and explores her history as an alcoholic, her destructive relationship with Louis’ father, and her strained home life growing up.

This is a novel of dysfunction and struggling to cope with the twists and turns life takes, but it’s a topic that unfortunately shifts from careful exploration of difficult topics into soap opera dramatics at the drop of a hat. The novel jumps back and forth between Polly’s life now and the pivotal moments of her past that set her on this path – the first time she picked up a drink, the first time she met Matthew, the day she left him – and it’s interesting to see her story unfold and interlink across the years. The problems for me come in a handful of scenes that feel forced, almost as if Peterson knew she needed to write these moments for the sake of a plot, but wasn’t quite sure how to fit them in seamlessly. At times, these seams definitely show and undermine the strength of the rest of the novel.

Character-wise, I liked Polly but I preferred some of the supporting characters. You have to admire the strength and determination Polly shows in admitting she has a problem, making amends and moving on with her life to be the best mother she can be to her son. While I wouldn’t go as far as to say she was a little bit of a cliché, I would say that an effort was decidedly made to make sure that Polly faces everything that an addict could go through and leave it up to you to decide how realistic this may or may not be. On the other hand, secondary character Ben, another single parent who has been forced into the role of guardian for his niece following the sudden death of her mother, had a story I was interested in, and I was a little sad to only receive it through snippets of conversation prompted by Polly. The children are adorable but again, I wish they had more of a voice – everything they think or feel is filtered to us through the adults in their lives.

If this novel set out to provide a picture of the struggles of addiction, I think it missed the mark a little in only telling one side of the story. The novel’s journey through Polly’s life is a fascinating look at the mechanics of the illness, and the potential mental processes experience by addicts. When it came to extending this journey beyond that of our protagonist, however, the novel struggled. It may be a side effect of the first person narrative, but the lives and stories of Polly’s family and friends are reduced to a meaningful speech or two, which don’t have a lasting impact on the overall novel. The romance also felt secondary, despite the synopsis establishing this as a driving force of the story.

Having said this, towards the end of the novel I was eager to race through the plot to see how everything was resolved, soap opera drama and all. Without the dramatics, the story would’ve been a fascinating exploration into the mental state of someone struggling through a lifetime of destructive habits and the efforts that were made to put them behind her. The overall message of the novel was an important one we should all remember: life is by no means perfect, but it’s how we cope with these changes that define us.

With A Zero At Its Heart – Charles Lambert Review

By My Side – Alice Peterson Review