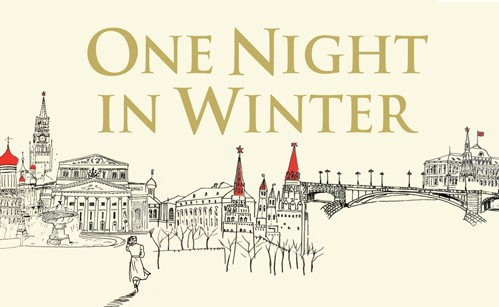 ‘Moscow, 1945: As Stalin and his courtiers celebrate victory over Hitler, shots ring out. On a nearby bridge, a teenage boy and girl lie dead. This is no ordinary tragedy and these are no ordinary teenagers, but the children of Russia’s most important leaders who attend the most exclusive school in Moscow. Is it murder? A suicide pact? Or a conspiracy against the state?’

When I read the above on the inside cover of Simon Sebag Montefiore’s One Night In Winter, I knew this was going to be a stellar read and sure enough, from start to finish, it doesn’t disappoint. Hardly surprising considering it comes from a Sunday Times bestselling author.

Set in Russia in the 1940s, the story starts with the moment that the devastating shots ring out through Moscow, a tragedy that will have the worst of consequences; this is just the beginning though. As the two children lie dead on the bridge, it’s clear that life is about to change for those closely linked to the deceased. What isn’t clear is what happened to cause this tragic incident. As the sequence of events unfolds, powerful Russian families are sucked into an investigation that forces the children (some as young as six) to pick between Soviet duty and family, with the knowledge that every wrong choice will have unthinkable repercussions. With tragic love as its backdrop, the merciless investigation pulls each family apart, stealing the children from their parents, who are forced to act as if nothing is wrong, only to eventually turn the investigation on to the ultimate threat to Stalin, the parents themselves.

Taking us back in time before the tragedy occurs we meet our main characters – the game players – and, whilst there are an awful lot of them to remember, they’re all crucial to the story. We’re taken through the events that led up to the death of the two children and it’s in the aftermath that the story really takes off. Nothing is as we initially expected it to be and people definitely aren’t who they seem. With this story, the lives of every single character – with the exception of Stalin who is untouchable – revolves around what is said and done; one accidental slip of the tongue or seemingly insignificant action can create a domino effect. As said in the prologue, “Like a party of mountaineers, when one falls, all fall”, a maxim that is apt throughout the entire story and provides the basis of the novel.

This is one of those rare and thrilling books that you devour hungrily but hope will never end. The characters are well thought-out and the fact that it centres so strongly on children – manipulated, maltreated and oppressed during the time of Stalin – allows the reader to form a bond with them through the pages. You feel so deeply for each child in the investigation, knowing that their parents are helpless against the Party, particularly their mothers who are desperate with despair. The historical element forms the foundation but One Night In Winter is more than just history and politics, this story is all about the human element – loyalty, family, love, friendship, integrity. Something that can be broken and exploited but never stolen from someone, something best portrayed within the heroic characters of Losha and Benya Golden – they provide light in a book that is full of cruel and unfair darkness.

Simon Sebag Montefiore is an exceptional writer, bringing to life long-deceased people with entirely fictional characters so well that in the end you fail to distinguish who actually existed and who is entirely made up. His ‘fact and fiction’ chapter at the end however, is a helpful addition for those who, like myself, aren’t particularly well-read when it comes to 1940’s/50’s Russia and the Soviet Union.

If there is one book you must read this year, let it be this one. One Night In Winter is one of the most engaging, gripping and heartbreakingly tragic novels of 2013. A story of harsh Soviet rules and harsher punishment under the Communist Party, a tale of romance in a time where bourgeois sentimentality could lose you your head and a novel that tells of human survival and love in harsh climes. It will leave you with a tear in your eye and have you musing over the characters for days after. That, “dear friends, beloved romantics, wistful dreamers” is a sincere sign of a truly notable novel.

Lighter Than My Shadow – Katie Green