Honne write love songs; songs about commitment and appreciation and honesty. Tonight at the Brixton Academy, four years to the day since their first London gig at the Sebright Arms, the duo get that love back from their audience in spades. The Academy is packed to the rafters, and the affection in the room is palpable. Every lyric is shouted back, every call-and-response rallied to, every solo met with riotous shouts. For a band that originated just up the road in Bow, this is clearly a big moment – the gleaming cherry on a cake of a year.

The rapturous welcome that they receive is well earned: at the end of their latest world tour, Honne’s show is polished until it sparkles. They sit in the Venn diagram between hip hop, soul and pop, like a less dangerous Jungle, and like Jungle they reproduce their heavily produced albums on stage with a full band. Their tight, in-the-pocket grooves and expansive sounds are delivered perfectly in this live setting, and the individual members of the band perform with commendable aplomb. Backing singer Beka’s lead turns are clear highlights of the night, her powerful voice cutting through the mix and sending the crowd ballistic.

The stage set is reminiscent of a Japanese billboard (appropriately enough given the band’s committed flirtation with Asian culture), dominated by the pulsing image of the woman in the mirror from the cover of Love Me / Love Me Not. The lighting is used to full effect throughout, firing off strobes left, right and centre and bringing down eerie mint-green washes on the slower numbers. It’s perfect in the Academy’s weird, outside-in, Italianate cavern, matching the sense of mystery and electric chill that pervades their music. 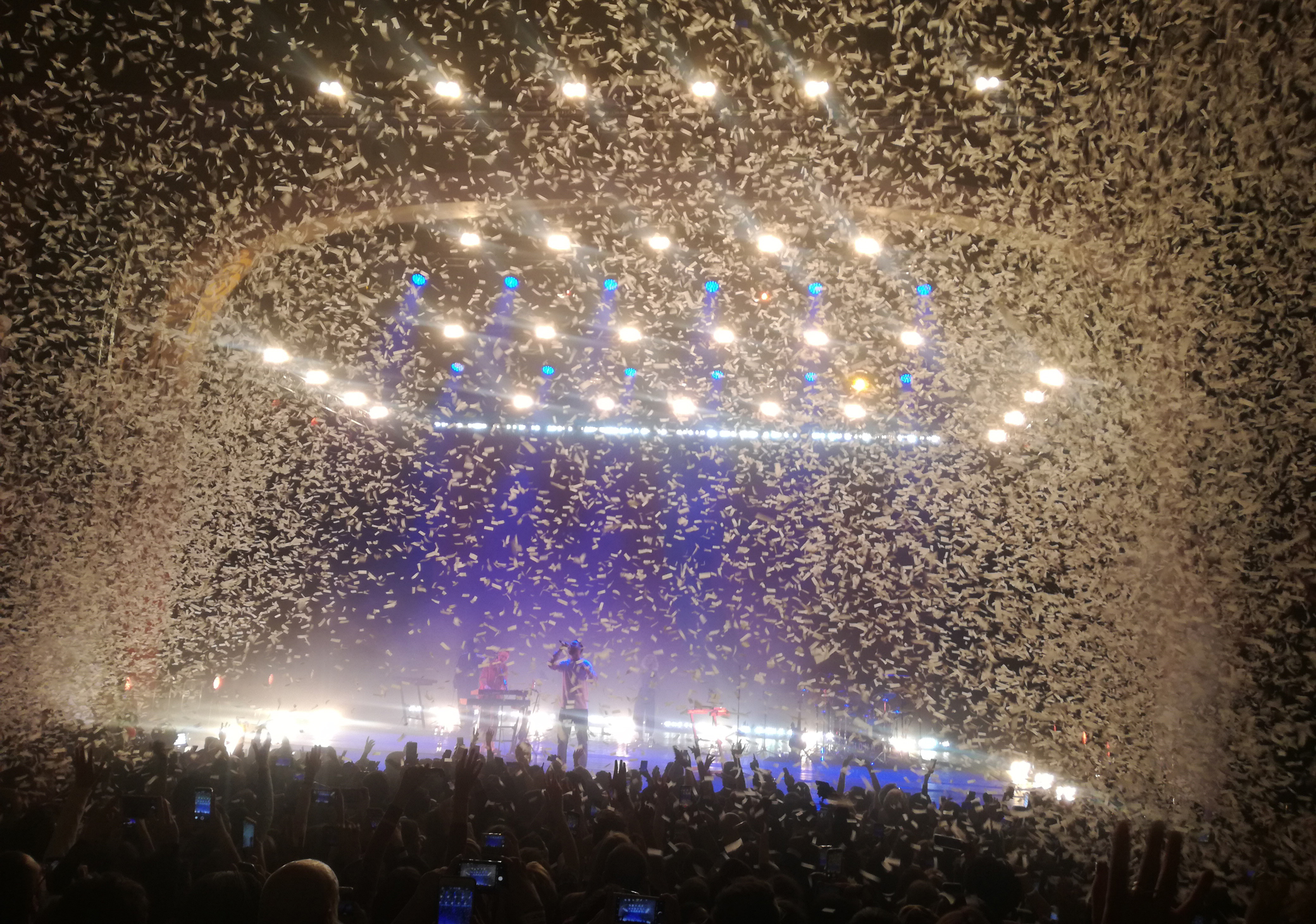 Mind you, ‘chill’ isn’t really a word you’d use to describe this gig. In keeping with Honne’s determinedly positive vibe, there’s plenty of unmasked joy in the room. Frontmen Andy Clutterbuck and James Hatcher (not the most Oriental of names, it must be said) are clearly loving every minute. That’s one of the best things about London gigs – they’re always a culmination for UK acts, always the Big One. You rarely get the ‘Hello, Night 73 On The Tour!!’ syndrome here.

Unusually for London, though, the audience are every bit as ecstatic tonight – often prone to oversaturation, for Honne there’s actual screaming at the end of songs, and when it comes to a this-side-of-the-room-versus-that-side singalong on ‘Warm on a Cold Night’, it’s like we’re all kids again, gleefully bellowing as loud as we can.

Put simply, this was a class act – a perfect balance of high-quality musicianship and barefaced Freddie Mercury audience interaction. It’s a shame the same can’t be said for certain members of the audience – combine Saturday night with vaguely rhythmic music and apparently you get slack-jawed drunks who’ve come along to shout inanities rather than watch the gig.

Nevertheless, with that minor irritation aside, Honne’s homecoming was one for the album. Check them out if you’re new to their world.