In 2012, at the bottom of the North Sea, three commercial divers were performing a routine job. Deep sea divers rely on an ‘umbilical cord’ to keep them safe under the water – it attaches them to an air supply, provides warmth, and shows them the way back to base when it’s too dark to see. Without these cords, they are lost. Last Breath tells the story of the rescue mission that took place after one of those cords was severed.

And yet it isn’t. Not really. Last Breath recreates the incident using a mix of contemporaneous footage and reconstructions. Unlike in some recent documentaries – Under The Wire springs to mind – the combination isn’t seamless. Early in the film, one of the divers explains that because the bottom of the North Sea is so dark, it’s often harder to find the job than to actually do the job. That inky blackness makes many of the actual images from the event incomprehensible.

The reconstructions don’t fare much better. Okay, you can at least see what’s going on. But what’s going on just isn’t very interesting – at least, to diving novices who don’t have a clue what it means to push this button instead of that button. Ninety percent of these staged scenes are anxious-looking men turning knobs and flicking switches, and it doesn’t take long before this gets boring. Though one might imagine using the men from the incident as actors would add authenticity, the fact that they aren’t actors lends these scenes a self-conscious, awkward air. 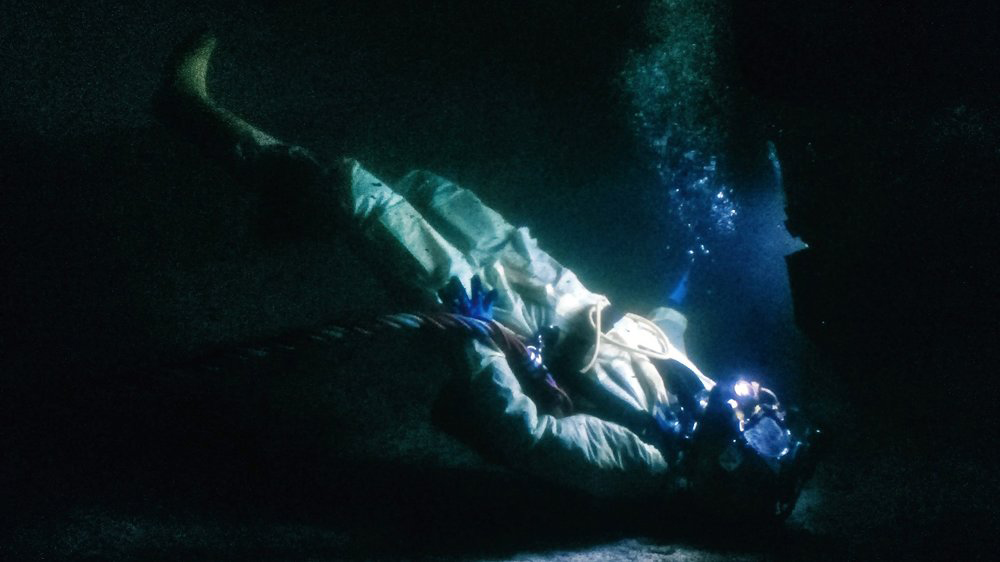 At least, to some extent, co-directors Alex Parkinson and Richard da Costa seem aware of the limitations of their material, and go a way towards making up for it in other areas. In particular, Ben Baird’s sound design pulls more than its fair share of weight; the roar of the sea, the creaks of the submarine, the frantic breaths of the men are all deployed for maximum tension.

Less successful in upping the tension is the decision to keep the revelation into whether or not Chris Lemons – the diver who needs rescuing – survives until the final act. Not only does it border on tasteless, it’s also pretty easy to guess. A man’s life shouldn’t be used as a lame gimmick.

Last Breath is most enjoyable before it even gets to that terrifying incident. The documentary includes lots of footage from Lemons’ video diary. He fills us in on some unexpected details of diving life (the boat has a sauna and a sunbed on board), as well as introducing the rest of the crew. The personalities of the three men – Chris the eager novice, Duncan the nurturing father-figure, Dave the unemotional ‘Vulcan’ – are the best part of the movie. It’s when the exploration into them stops and the play-by-play of the incident begins that the film starts to lose its way.

Ultimately, whilst the story that Last Breath tells is an exciting one, the filmmaking never quite does it justice.