If you have already scrolled down to the bottom of the page to see what rating I have given Jumanji: Welcome To The Jungle, you might be approaching this review with scepticism. Four stars? Really? For an unnecessary remake of a film that was never critically loved in the first place?

I was surprised too.

Jumanji takes place twenty years after the original. Four high-school kids find themselves in detention, where they are assigned the task of cleaning out the basement. There they discover a retro videogame console, and intrigued, plug it in. They get sucked into the jungle world of Jumanji, where they inhabit different bodies (those of Dwayne Johnson, Kevin Hart, Jack Black and Karen Gillan). Bemused by their strange situation, they soon learn something terrifying; only beating the game will allow them to return home.

The first thing to say about Jumanji is that it is really, really funny. Director Jake Kasdan and the four credited writers prioritise humour over action, and that’s a wise decision. The leads have a wonderful, sparky chemistry. As many of the laughs come from them bantering as they do from the grand set pieces, like Kevin Hart’s death by exploding cake (don’t worry, as per videogame tradition, they all have three lives), or Karen Gillan’s extravagant dance-fight number.

Jumanji works as well as it does thanks to the terrific cast, both the top-liners and the one-scene wonders. Rhys Darby pops up in a role that is solidly Rhys Darby; much like the rest of the movie, his cameo is nothing new, but it’ll make you smile. Bobby Cannavale adds genuine threat to a villain that is, by necessity (he’s a videogame character, not a person) underwritten. Colin Hanks provides a well-earned emotional pay off.

A mini furore erupted when the film’s first promotional pictures arrived, and Gillan was wearing a highly-impractical-for-the-jungle crop top, especially as she was surrounded by three fully-clothed men. Well, the movie does mention the unsuitability of her attire, yet it’s hard to get away from the feeling Jumanji is trying to have its cake and eat it too. The fact that this is yet another big studio blockbuster with just one woman amongst a group of men makes this even more uncomfortable. 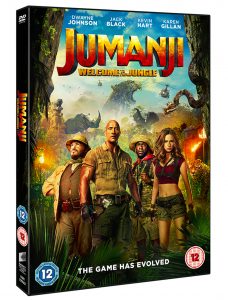 Ultimately though, Jumanji is so sweet natured that it isn’t hard to forgive a couple of regrettable fumbles. Many of the sweetest moments come from Jack Black, who is playing the avatar of an image-obsessed teenage girl; the bond that forms between Black and Gillan (the avatar of a more bookish girl) is genuinely endearing. Whilst the message of the film isn’t anything new (always be yourself, teamwork makes the dream work etc.), the method of delivery is effective. It hits familiar beats, but it hits them well.

Hilarious, good-natured, and overall better than it had any right to be, Jumanji was the nicest cinematic surprise of 2017. I’m looking forward to the sequel.

Jumanji: Welcome To The Jungle is out on Blu-ray and DVD from 30 April 2018