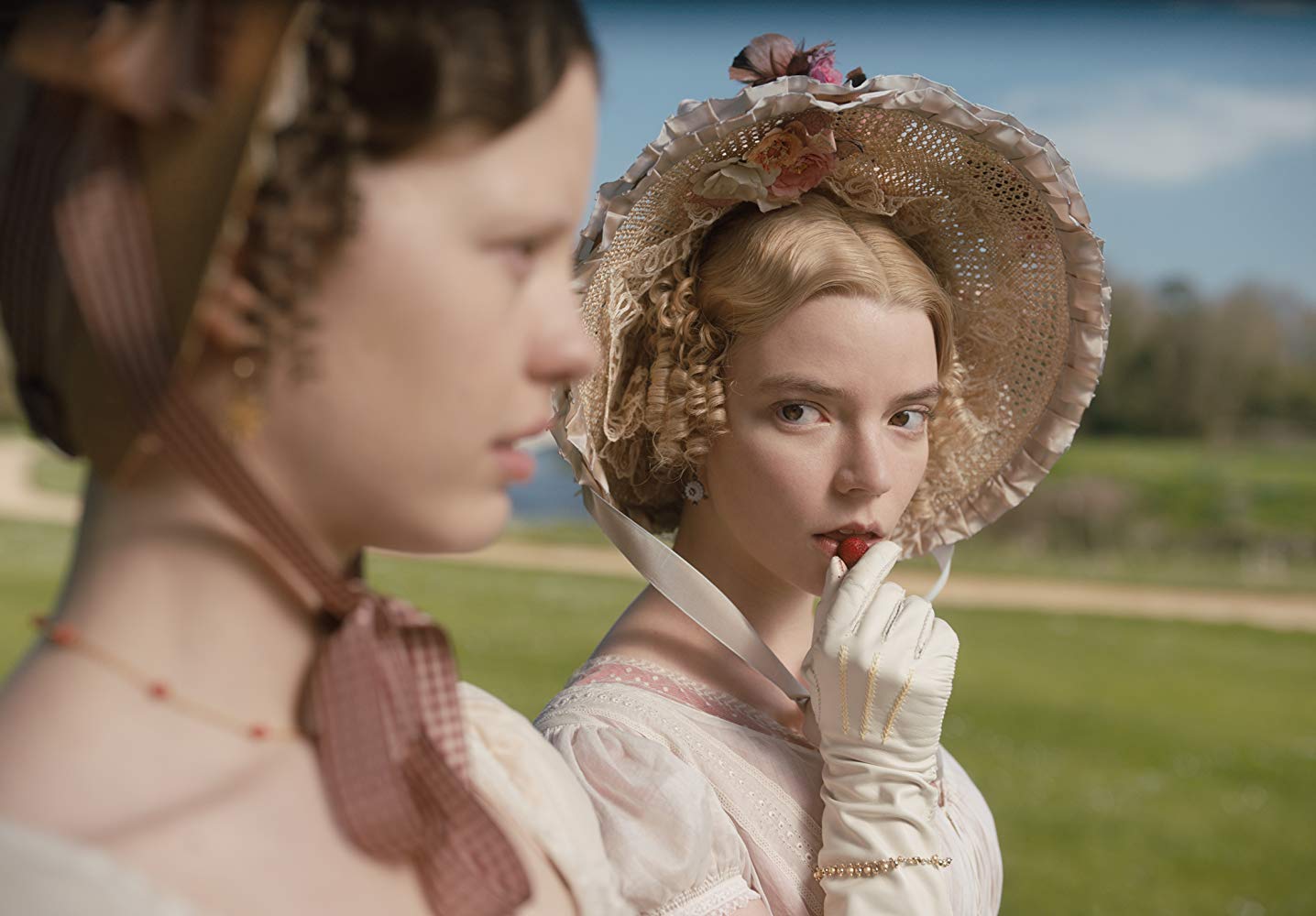 In her feature film directorial debut, an adaptation of Jane Austen’s Emma, Autumn de Wilde’s photographic sensibilities come through with the framing and the preoccupation with aesthetic. Each frame is rich and delicious. Even when we’re just taking several beats to take in Anya Taylor-Joy’s face, it’s pure magic and you can’t look away. Every second is deliberate and conscious of giving us something to latch onto, and a lot of the time that something is Alexandra Byrne’s masterful costumes, which fit entirely with the film’s playful, flirty and girly colour palette.

Taylor-Joy herself is nothing short of spell-binding. She’s a master of being wonderfully expressive – we know exactly what she is thinking at all times, but we also believe how she is able to keep that hidden from almost everyone else, wrapping them around her finger. The supporting cast also play their own roles perfectly, entirely in-sync with the tone and rhythm of the piece, while contributing a humour unique to themselves and their character. Standouts are Miranda Hart’s Miss Bates, Josh O’Connor’s Mr Elton and Bill Nighy’s Mr Woodhouse.

Whilst this is comedy that centers around love and marriage, Emma is also very concerned with privilege. The film opens with a quote from Austen’s novel, stating that up until this point in her life, Emma has lived her twenty-one years “with little to vex her”. The lady of the house, she tends to her relationships in Highbury the way she does the flowers in her greenhouse. We meet Emma Woodhouse when perhaps she is encountering her first vexation – her governess, Miss Taylor, is due to become the Mrs Weston, and is leaving to live with her husband. Emma, having had a hand in the matchmaking, is pleased at her success, but we do get glimpses of some small moments of discontent at having no partner of her own. Though she doesn’t say it, her haughtiness makes it clear there are none whom she considers her equal – except for, of course, Mr Knightley. Much as it is her duty to care for and see to her father, it is that way for every relationship in her life. She plays a role as much as she makes them play one for her.

Regarding her own privilege, Emma herself says to Harriet as much, stating that she is lucky enough to not have to marry, as a woman, because of her social position, and as a result does not intend to. Of course, this doesn’t stop her making the perfect matches for others, highly invested in particular in Harriet finding an appropriate husband. It is Emma’s privilege that is responsible for her faults. The knowing, and yet-not-knowing nature. Mr Elton being the first rude awakening of this: that she cannot entirely control others, or predict what they are going to do. 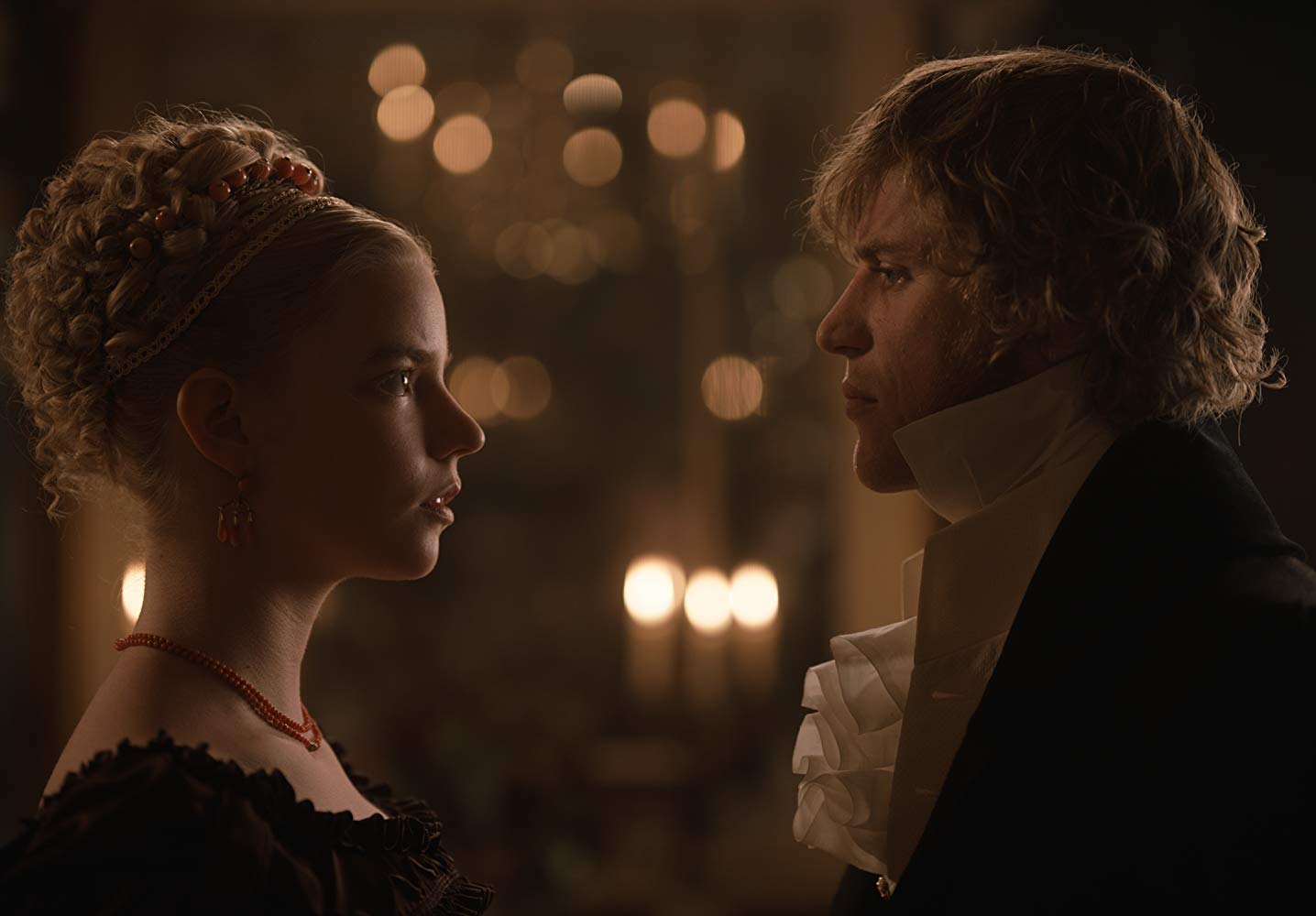 Nevertheless, de Wilde gives special attention to the bickering of Emma and Mr Knightley, acknowledging how they both have their own side based on their own understanding of the world. Emma is not entirely a lost cause under de Wilde’s direction – she is right in her belief that marriage, at the time of the novel especially, is a crucial decision for a girl. Something even Knightley has to come around to understand, and he does, which is also why the romance works as well as the social commentary and the giddy comedy.

The two characters are equally stubborn, equally proud, and equally determined to impress the other, without letting on to the other that that is their intent (Knightley more successfully than Emma, at times). Again, de Wilde has the perfect keen eye for visual language. Their flirting very much exists in loaded, missed glances and rogue, longing touches – all of which are thrilling to witness on screen.

Something picked up on by de Wilde is the lack of female presences in Emma’s life. She covets Harriet so dearly, wanting so much for her that she ignores that which Harriet is naturally drifting towards, and in turn feels a competition with Jane Fairfax. The depiction of their friendship – and what Emma herself gets out of it, not just Harriet – is also very astute and needed to round out the film.

Emma is maybe one of the least likable Austen heroines. She’s presumptuous, controlling and – to borrow a title from another adaptation – clueless despite her arrogance and stubbornness, perhaps even because of it, and has derailed the lives of many people around her by the time she realises she has. It takes a particular kind of talent to embody that and still come out of it unscathed – not only that, but to have us still root for Emma when she’s making mistake after mistake. It’s no surprise previous incarnations have been Romola Garai and Gwyneth Paltrow. Even still, it takes a smart, empathetic director to craft such a sharp and witty adaptation, striking exactly the right tone for this Austen, while also placing it smartly in today’s conversations about love, marriage, and privilege. But if you’re also just looking for some good, old-fashioned Austen romance to swoon over, run and don’t walk to your closest screening.