The inspiration for Twelve Percent Dread came from a couple of places: One was my experience working as a nanny and tutor for very rich London families after graduating from university. It was a depressing time in many ways, but of course it was also very bleakly funny. Your boss handing you double your week’s wages in cash to spend on one afternoon out with the kids at Winter Wonderland… bleak, yes. Very funny, also.

The other was that I heard an anecdote on a podcast about Mark Zuckerberg visiting a Himalayan ashram during a period of “crisis”, and apparently coming away feeling completely healed. How wonderful for him! That was also very funny to me – the fact that the modern capitalist CEO class are also desperate to convince themselves of their own righteousness. The character of Michelle, the spiritually-minded CEO of tech giant Arko, developed from there. 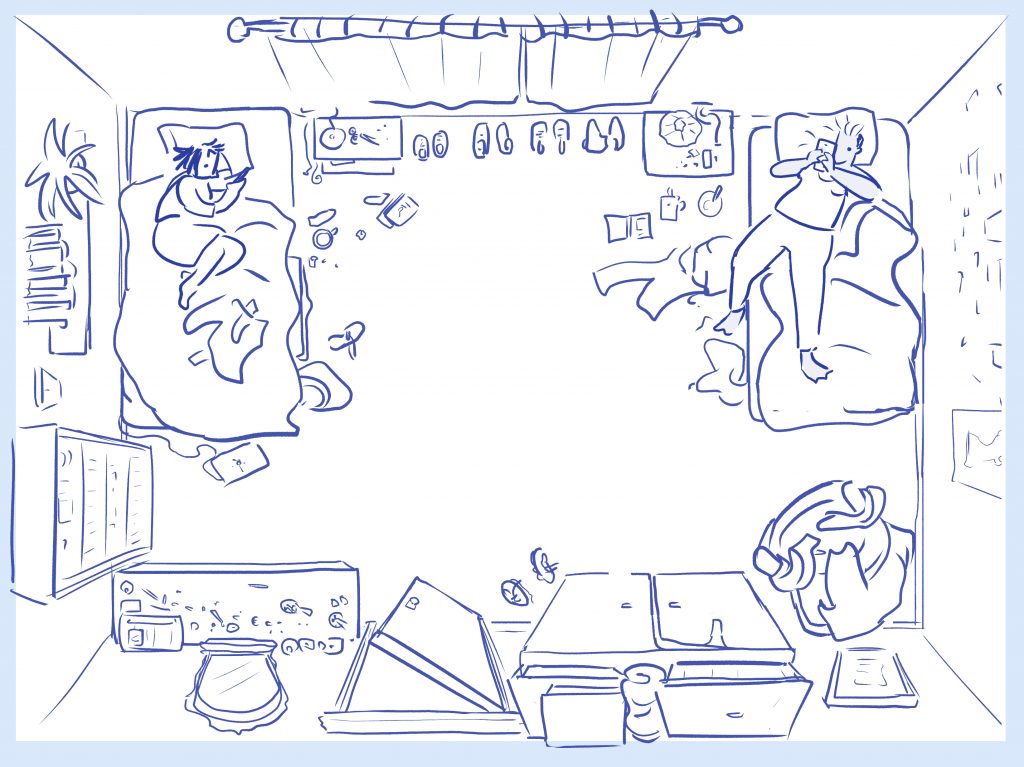 The way I write graphic novels is kind of like a movie: I type a dialogue script on the computer, then I draw up storyboards in blue pencil, with scratchy stick figures. Storyboarding helps to reveal parts of the script that fall flat – maybe they are dull or pointless, or perhaps the scene I imagined in my head just isn’t translating well onto the page and needs reworking. So then, I’ll go over the storyboards with a red pen and make edits – crossing things out or drawing arrows with “MOVE THIS HERE”, and often things like “GET RID OF THIS” and “UGH”. And then I go back to the script and start the whole thing again!

People often ask how long it takes to draw a panel or a page – but this re-drafting process kind of makes it impossible to calculate. I *wish* that the process was as simple as thinking of a panel, drawing it, and then moving onto the next panel. It’s actually much, much messier and involves a huge amount of back and forth. What I can say is that the whole book took about two years, and the final version alone took easily over 500 hours to complete.

I tried to draw the final version as fast as I could – in about 10 weeks – because I knew that the longer I took, the more my art style would develop and wander from its original starting point. And this indeed happened, even with the condensed time frame – by the time I got to Chapter 8, it looked very different from Chapter 1! And so I had to go back and re-draw the first 30 pages or so.

It’s wonderful that graphic novels are becoming more established as a medium – the concept is so elastic, you can do basically anything with it and there’s something for everyone. My own style involves fast-paced jokes and intricate plotting, so I hope that my book will make people laugh and keep them guessing.