Christopher Nolan, rightly, has a reputation as a ‘big’ filmmaker. Big in his standing within the world of cinema, but more significantly, big in terms of the scale almost all of his films operate on, certainly those across the large part of his career, since Batman Begins in 2005. Yet that scale is always married to a sense of context, of the world outside the immediacy of the film, of a past and future, alongside the present. The crop blights of Interstellar that threaten survival; John Blake inheriting the Batcave at the end of The Dark Knight Rises. The spectacle is defined by its relationship to the world implied to exist before the film, and expected to exist after it.

Yet it’s the best possible compliment one can pay to Dunkirk to say that it exists almost exclusively in the present. In the case of almost every character, we don’t know who they were before Dunkirk, let alone before World War II itself, nor do we know who they will be should they make it back home. Many characters are never even explicitly named on-screen. Dunkirk eschews context, in favour of experience.

That experience, split across three intertwining strands – The Mole, The Sea, and The Air – is visceral to the definition of the word. The natural instinct would be to call it bleak, or discouraging, or some such notion of the desperate situation those at Dunkirk were in. But none of the narrative of Dunkirk is presented as bleak; it is simply presented. The emotional content is stimulated in the viewer without much instruction from on screen.

It’s hard to see an alternative perspective on such efforts to escape death, so Nolan, unlike so many war film directors, resists the temptation to press the issue. Of the three strands, only one is nominally tied to the water, but all three have a core relationship with it. The tides on the beach ebb and flood, as do all the sinking ships struck down, as does Collins’ (Jack Lowden) plane as he struggles to break the cockpit. The water reinforces the lack of direction, open to the characters, going frantically from one potential escape to another.

There are few active choices made in Dunkirk, rather than those made without alternatives, or made under the mental strain of events, but those that are made are defining and telling. Kenneth Brannagh’s Commander Bolton chooses to stay behind to aid the French evacuation. Mark Rylance’s Mr Dawson chooses to captain his own boat, rather than letting it be commandeered by the Navy. Tom Hardy’s Air Force Pilot, Farrier, lands his plane on the beach, before voluntarily becoming a POW.

More damningly, Alex’s (Harry Styles, in a surprisingly capable performance) attempts to sacrifice Gibson (Aneurin Bernard), first under suspicion of him being a German spy, and then once he admits that he is French, and not ‘Gibson’ at all. In the latter case, the film’s persistent lack of judgement is clearest; Gibson drowns, tangled in chains as the boat floods through bullet holes, yet Alex’s reluctance to be seen as a war hero is due to the failure of ‘only’ surviving, rather than a reflection upon his own actions.

Having taken over from Wally Pfister for Interstellar (as Pfister directed Transcendence), Hoyte van Hoytema returns again as Nolan’s cinematographer, perhaps reflecting a permanent new partnership, or perhaps once more a temporary measure while Pfister worked on directing all episodes of the upcoming adaptation of The Tick. Either way, it connects Dunkirk to Interstellar comparatively. Speaking personally, as one often only can, the cinematography of Interstellar, with its crushed tones and impersonal perspective on personal events, worked well. Yet many saw this to be a flawed approach, a missed opportunity to exploit the potential of the camera. Either way, the detached perspective is present again here, and surely must be seen to perfectly compliment Nolan’s direction. 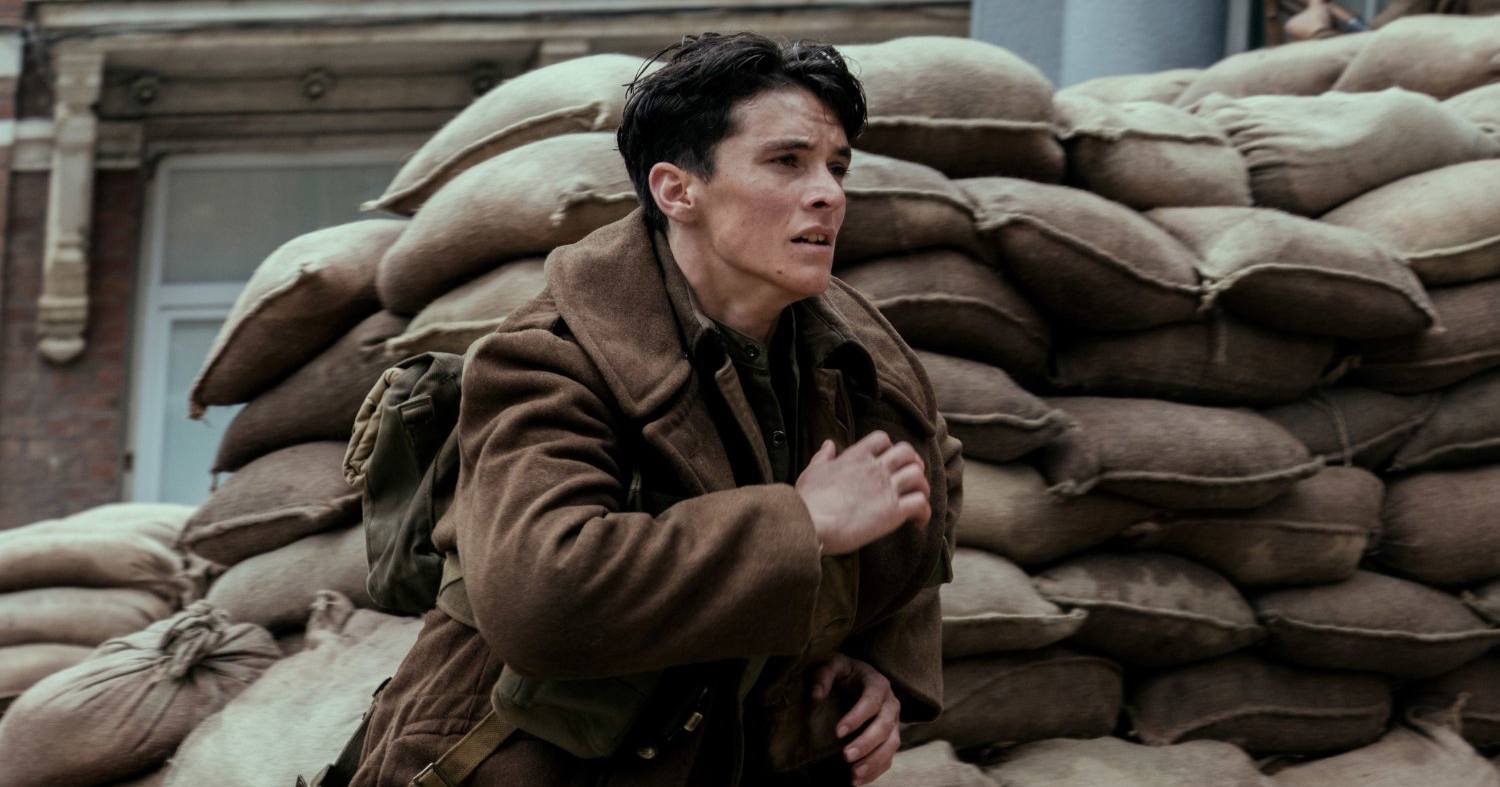 While van Hoytema persists with a style, Hans Zimmer reinvents his. The bombast of his earlier work with Nolan is famous (or perhaps infamous to some), and while Interstellar was a new angle, it was still familiar in structure, building and informing the viewer with unsubtle melody and beauty. Yet Zimmer’s score for Dunkirk is entirely different. It builds and lulls and builds again, accompanied often by the ticking beat of a recording of Nolan’s own pocket watch. Any sense of escalation as exists typically in a Zimmer score, in any score, telling the audience that this moment outstrips that moment for significance, is non-existent.

In Dunkirk, every moment holds value, from start to finish. There are flourishes that oddly seem reminiscent of the work of Underworld during the 2012 Olympic Opening Ceremony, perhaps not in melody, but in the same sense of spirit as accompanied that event. And of course, both Dunkirk and the Olympics had Kenneth Brannagh striking the classic ‘Kenneth Brannagh watching dramatically’ pose.

It feels cliché to say it, but Dunkirk feels close to what one could call pure cinema. It doesn’t really ask questions of the viewer, nor does it place them inside the philosophy of the narrative. Instead, it simply invites the viewer in, to experience that which those on the beaches might’ve experienced. And, as close as one can get with 77 years and a screen between them and events, Dunkirk succeeds in doing so.