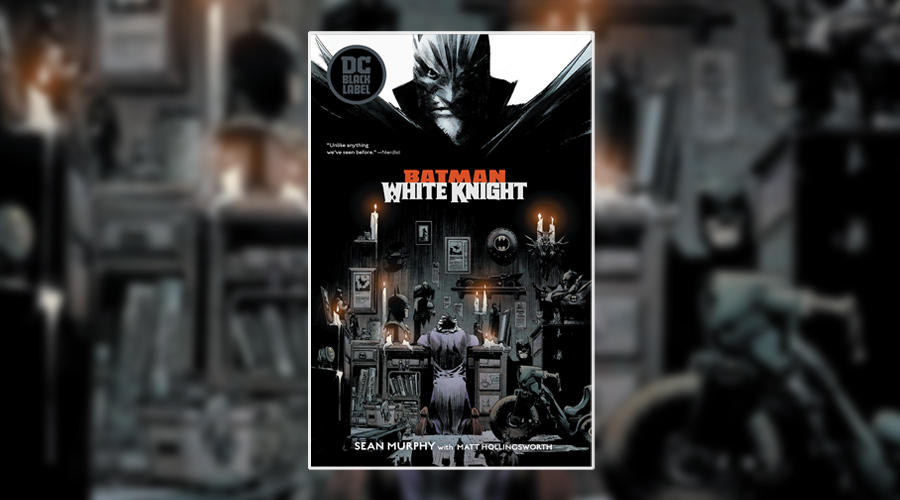 Batman: White Knight features an interesting premise: The Joker is cured of his insanity and decides that he, rather than Batman, can be the saviour of Gotham City. He quickly sets about trying to control crime and help the disadvantaged, finding ways to give the Gotham City Police Department tools to match Batman’s. White Knight is an Elseworlds story, meaning it’s set outside of regular Batman comics continuity, which allows it to fully explore its central idea without limitations.

The graphic novel starts by asking a simple question: does Batman do more harm than good to Gotham? And from the evidence presented, its hard not to see the writer’s point. In a way it’s a commentary on how Batman has changed through the years to the point where now he charges through his city in a tank and just punches the hell out of criminals.

It opens on the shocking reveal that a year from now Batman will be locked up in Gotham, with The Joker coming to ask him for help. But through it all, the story is able to stay mostly grounded. It achieves this by presenting a Batman who is totally human and fallible, as opposed to the god-like figure modern comics and films often treat him as. One way it manages this is by truly digging deep into the relationships between Batman and his allies, here reduced to Nightwing (his former Robin) and Batgirl. They can see the dark path their mentor is going down, but feel powerless to stop it.

The portrayal of Jack Napier, The Joker’s alter-ego, is handed very well, though at times it’s hard to see his methods as anything other than villainous. There’s an odd mix of him making valid points, pointing out how much money Batman costs the city and the lack of help it does, which is contrasted with him taking extreme methods of his own. In particular, the way he controls crime is quite chilling, and is easily exploited by the arrival of a new threat. By the book’s end, you do genuinely care for Napier in a way I didn’t expect.

One of the more controversial elements of White Knight was the introduction of the idea that there are two Harley Quinns: the original Doctor Quinzel who treated The Joker at Arkham Asylum, and a new, crazier, sluttier dressed version. The newer Harley took her place seemingly without The Joker even noticing when the real Harley left. This Harley is a commentary on how the portrayal of Harley has shifted in recent years. Originally she was his fun, mad sidekick but even great games like Batman: Arkham Asylum have heightened the sexuality of the character, to the point where the Harley seen in Suicide Squad dressed provocatively and constantly talked about sleeping around. In addition, more and more it’s established that the relationship between the pair is incredibly abusive but that Harley likes it that way. She’s a real change from the child-friendly character originally introduced in Batman: The Animated Series.

The two Harleys reveal is one of the better elements of the book, establishing that there’s a Harley who truly loves the man that Napier is, as opposed to the madness of The Joker. The love between Harley and Napier represents something that this Batman feels he can never have, and is another way to show that Napier is probably more adjusted than Bruce. Harley does still feel like a character completely defined by The Joker however, even as the comic reveals she has thoughts of her own.

The artwork throughout, drawn by the writer Sean Murphy, is constantly good. The ways he distinguishes between Napier and Joker are very effective, changing posture and lighting effects so that you can tell which is in control. His action scenes feel kinetic, yet easy to follow and great to look at. One chase scene late in the story in which many Batmobiles are utilised is particularly effective – with each one being distinctly recognisable as from a specific comic era or film franchise in a fun throwback to what’s come before.

At its core, White Knight is a story about the relationship between Batman and his greatest rival but it digs far deeper into both characters than anything I’ve read before. The Batman presented here is broken; perhaps he’s been at it for too long. Murphy’s world is one that could be explored further, looking into how Bruce acts going forward and whether he can continue to be Batman.

Batman: White Knight is an entertaining and insightful graphic novel that stands perfectly alongside other classic Batman stories. It will be one that is studied for years to come.

Batman: White Knight is published by DC Comics on 9 October 2018