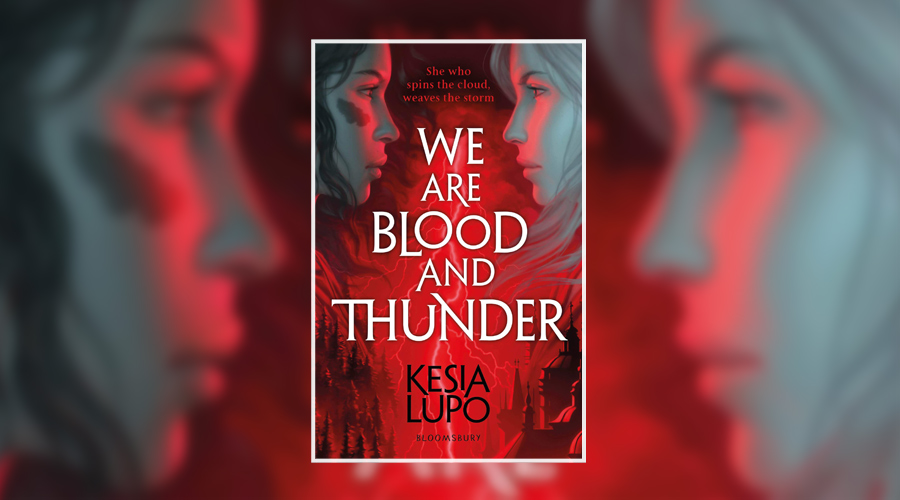 YA fantasy is full of stories about mages, witchcraft and supernatural sorceresses, yet Kesia Lupo’s We Are Blood and Thunder feels unique from the prologue. Fuelled by menacing and mysterious magic, it’s a debut that’s as dark and foreboding as the title suggests, kicking off the action with one woman escaping from a sealed-off city, and another desperately trying to find a way back in.

Lena is the young woman running for her life, hunted by men and dogs after being convicted of being a mage. Brought up as a cryptling, people who are shunned for their defects and deformities, Lena has been taught to fear magic. The idea that she’s a mage is unfathomable and yet she can’t ignore the strange happenings that forced her to run from Duke’s Forest, the only home she’s ever known. On the other side of the gates is long-lost heir to the city Constance, a secret mage and a woman who wears a mask in more ways than one. The two women collide briefly, before going their separate ways; their fates entwined long before their chance meeting.

Duke’s Forest is a cursed city, cloaked in an ever-present storm that’s devastated the dukedom. It’s more than just bad weather; it’s a dark spell and it’s getting worse. The dead are trying to rise from the crypts and unless someone breaks the spell, the city and all its trapped inhabitants will be eradicated. Together, Constance and Lena hold the key to the storm’s destruction – except neither of them realise they need the other. Whilst Lena seeks out the City of Kings to try and make sense of her emerging magic, Constance re-establishes her claim on the city, going head-to-head with the underhanded men who have grown powerful in her absence.

Like her main characters, Lupo jumps headfirst into the action, throwing readers into a world of old-school magic, ominous threats, and more dangerous, devious characters than you can count on two hands. There’s no pure good or bad, with both Lena and Constance existing in that fascinating grey area that keeps their motives murky and their choices unpredictable. Whilst youthful and conflicted Lena is the more compelling protagonist initially, Constance quickly comes into her own, whipping out magic that would make Gandalf proud. She’s an altogether more difficult character to decipher, often doing and saying contradictory things, and that makes her the book’s wild card because you can’t anticipate what she’s going to do next.

The magical world is richly imagined, influenced by an intricately weaved belief system in the Holy Council of Nine Gods that’s realistic and well thought-out. Beyond Lena and Constance, the story is populated by other equally compelling characters – from Constance’s soft-hearted stepbrother Winton to the sincere huntsman Emris who helps Lena with her magic but has his own connection to Constance. Juxtaposing the honourable male characters are plenty of loathsome men who’ll stop at nothing to gain authority, fear and control. The only shortcoming is a lack of other exciting female characters beyond the central protagonists of Lena and Constance, who are almost exclusively surrounded by men.

Brooding and action-packed, We Are Blood and Thunder reads like an adult fantasy novel with all the best elements of YA, including the start of a whirlwind romance and lots of internal angst. Whilst Lupo calls her debut a standalone, there’s so much scope for an on-going series set against the backdrop of the City of Kings and the Valorian continent, which would enable a little more character development. With a sequel set in the same world but with new characters already in the works, Lupo is a YA fantasy fiction voice to keep an eye on.