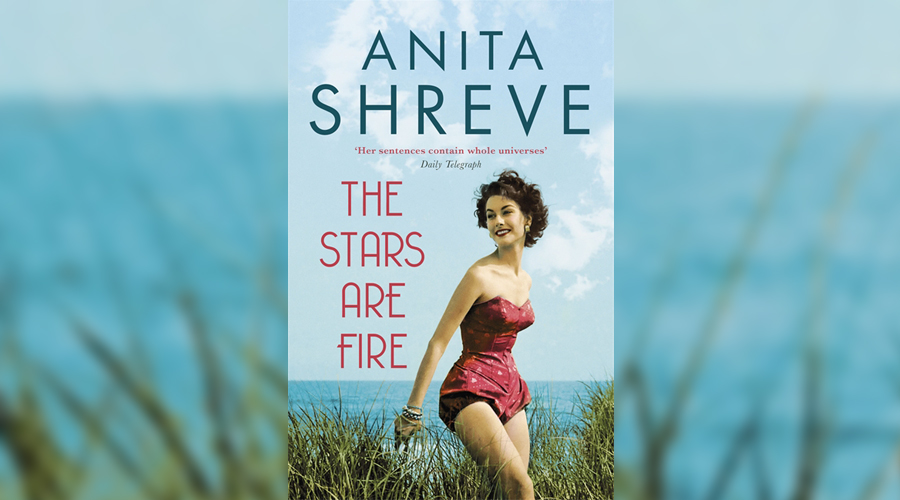 Anita Shreve’s The Stars are Fire is a life-affirming story set in the post World War II era. In 1947, a wildfire broke out in Maine killing more than two dozen people and causing extensive damage to property. This novel is inspired by that tragic event, which plays a crucial role in the story.

The story revolves around Grace Holland, a young housewife and mother whose life is no different than those of other married women in the 40’s. She has a somewhat unsatisfactory marriage with her husband, Gene, who is uncommunicative and prone to sudden mood swings. Grace’s sedate life is thrown into disarray after a raging fire destroys her house and forces her to flee with her children. Gene has gone missing after the fire breakout and Grace is left to reconstruct her life and rewrite her fate.

Grace’s circumstances seem to be hopeless and daunting but she finds it to be a liberating experience after years of feeling suffocated in the dreary routine of her life. She takes on every difficulty as a challenge, driven by insatiable resolve. Shreve portrays how in her seemingly paltry life decisions, Grace dares to defy societal stereotypes about what a woman can and cannot do. She makes bold decisions and sees them through with discerning poise. She is supported temporarily by her mother who comes to take care of kids but ultimately, Grace is on her own yet she still thrives and refuses to let anything get her down. In a way, it shows how the sexual revolution actually emerged decades before its time, with the hardened determination of each individual woman who decided not to wait for some divine intervention to bring change to their life and took matters in their own hands.

“Sparks and embers swirl around Grace. There’s chaos in the streets. She hears cars moving, women screaming. Balls of flame seem to leap from treetop to treetop, giving the fire a frightening momentum. A tree catches fire at the top, and the fire races down the trunk and into a house below. Another bomb. The fire turns tree after tree into tall torches.”

After she settles into her new life, Grace starts working at a clinic where she excels, learns to drive and gradually learns the rope of being a single parent. Along the way she runs into many kind strangers who help make this transition smooth for her. In this book, it’s mostly the women that take initiative and men are portrayed as one-dimensional characters. I also felt that in terms of characterization, Gene’s character’s trajectory became a bit implausible later on.

Shreve vividly evokes the sense of the 1940’s where a new washing machine was a cause for celebration and divorce was abhorred and something to be frowned upon. There are one too many dramatic plot twists, which don’t come across as realistic, and the abrupt ending of chapters made the reading experience a bit jarring. However, while the writing did at times come across as gauche, I liked the message of female empowerment that this book conveys. At its best, The Stars are Fire is an enlightening story about the resilience of a woman in a stifling pre-feminist society, against all odds.

The Stars are Fire was published by Little, Brown on 2 May 2017