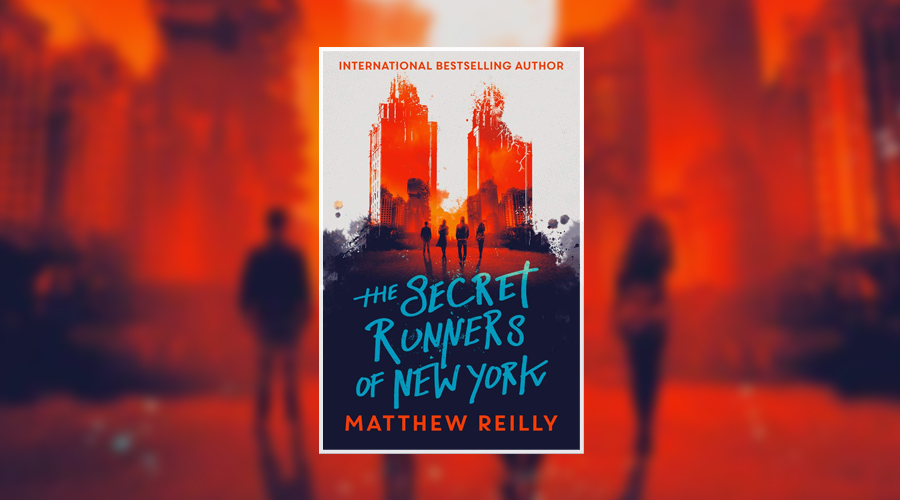 Matthew Reilly’s thrilling and fast-paced The Secret Runners of New York takes a cast of ultra-wealthy and privileged Manhattenite teenagers and throws them into a mind-bending, time-spiral scenario where the world is on the brink of destruction. The apocalypse is coming, but this isn’t a story of how these teens can avert the impending disaster that wipes out 99.5% of earth’s population. This is the story of how and if they can endure it, in the present and the future, and what they’re willing to do to survive.

Skye Rogers and her twin brother Red have just moved to Manhattan. There are rumours of an approaching global disaster, a gamma cloud that’s set to clash with earth. Yet Skye has a more pressing and credible threat to worry about – that of Manhattan’s elite and the dog-eat-dog society they exist in. Whilst easy-going Red finds an instant place amongst the popular set at their prestigious new Upper East Side school, Skye prefers to go unnoticed, sticking to the sidelines and staying under the radar, lest she become the newest plaything for the elite to torment. That is until she inadvertently helps Queen B of the group Misty, and Skye gets her invite into the city’s most exclusive gang: the Secret Runners of New York.

This isn’t your average elitist clique. Owing to the fact that some of the members come from old money, Mayflower descendent families, the teenagers have access to an ancient underground portal that can transport them into the future. Skye takes the plunge and vaults into a future timeline but what she finds is more horrifying than she could have imagined; a society that’s crumbled, a Manhattan in ruins, and a population of crazies running wild. Knowing that the rumours of disaster are true, Skye has to figure out how to use that knowledge to her advantage, whilst at the same time navigating a cut-throat elitist world and the revenge that’s dished out if you accidentally cross the wrong person.

Split into seven parts, The Secret Runners of New York is a mix of Gossip Girl and The Maze Runner with a bit of Stranger Things weirdness thrown in for extra thrills. It’s a tale of survival, jealousy, vengeance and wealth, exploring what happens to a supposedly civilised society when the apocalypse comes knocking. The system of class and prosperity that the teenagers are entrenched in immediately begins to collapse as the poorer factions rise up and chaos ensues. The gamma cloud might initially seem like the book’s main threat but the brutality it causes on earth is matched by the angry mob that descends on the affluent elite as the hours leading to the disaster tick down.

Reilly immerses us in this world of extreme, obscene wealth through Skye’s eyes. She’s an average teenager who loves Stephen King and hates watching the powerful teens at her school bully anyone who doesn’t fit into their perfect, privileged mould. She’s also terrified of interfering and having the ruthless spotlight fall on her instead, but she’s never swayed into joining in with the maliciousness. She has morals that go beyond money and it makes her a worthy, likeable heroine, along with her brother Red, whose inborn bond and twinstinct with his sister allows them to find their way back to each other when they’re separated in the anarchy.

This is a book that keeps you on your toes; it’s dark and disturbing and has enough visceral violence that it wouldn’t be a YA novel if it didn’t centre on teens. Reilly’s love of time-travel stories like Back to the Future and The Terminator is evident, as he plants crumbs and clues in one timeline for characters to discover in the other. Both the present and future are cleverly weaved and the time-hopping nature of the cave portal feels plausible because its origins are ancient rather than invented tech. The story is also a lot of mad fun, mainly because of the Manhattan world it’s set in; a chaotic place even without an apocalypse. If the film I Am Legend taught us anything, it’s that New York is the perfect cinematic backdrop for a city gone to hell – from the derelict skyscrapers and the abandoned cars to the flooded subways and overgrown vegetation. It’s so iconic and that’s what makes it so easy to envisage.

As a standalone, this is the perfect jumping on point for readers not familiar with Matthew Reilly’s books or indeed fans of Gossip Girl-esque books with a sci-fi twist. In the divide between rich and poor, life and death, Reilly offers up a cautionary tale with genuine heart and a central heroine who you’ll be cheering on.