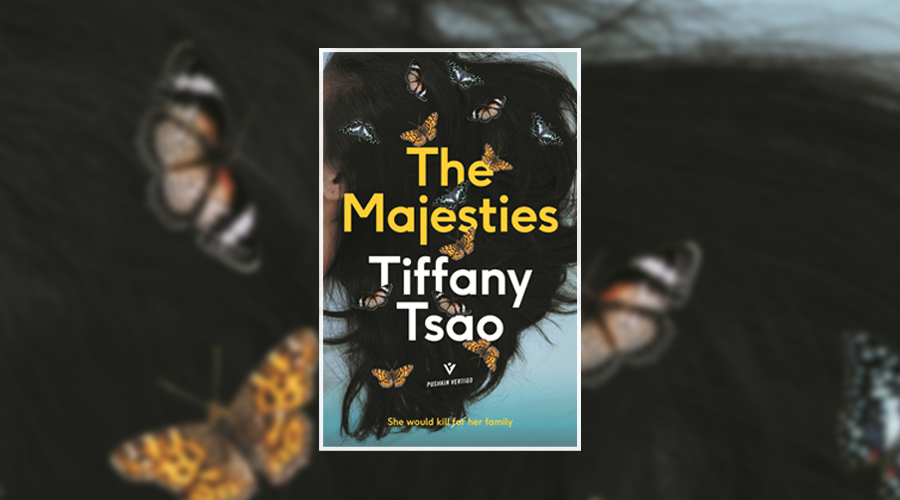 The Majesties, Tiffany Tsao’s latest novel, is quite the journey.

The opening chapter is almost ludicrously intriguing. We learn that our narrator, Gwendolyn, is the sole member of her family left alive after her sister Estella committed a mass poisoning. And when I say mass, I mean mass: she killed three hundred people, including herself. Gwendolyn barely survived the ordeal; she narrates the novel – in which she tries to work out how her sister could do such a thing – from a hospital bed, where she lies in a comatose state.

Once we get past that barn-burner of an introduction, events slow to a crawl. Tsao spends tens of pages introducing us to Gwendolyn and Estella’s family, the Sulinados, and their complex web of personal and financial dealings. These chapters, especially after the promise of the opening, are a real slog. Learning the names of all the sundry relations, as well as how they fit into the labyrinthine structure of the various Sulinado businesses, feels like homework. It may be necessary in understanding the twists and turns that come later in the book, but it sure isn’t enjoyable.

Happily, this portion of The Majesties does end. After a while, the strand that will constitute the bulk of the novel comes into focus: the abusive relationship between Estella and Leonard, the scion of a rival family. As the plot moves between timelines, we see the whole of their courtship and marriage, and the way it put such a strain on the once strong bond between the sisters. Whilst this section doesn’t live up to the exhilarating promise of that first chapter, it’s engrossing enough to keep the reader turning pages. Combined with the mystery of what happened to Gwendolyn and Estella’s favourite aunt – they thought she was dead, but then find evidence to the contrary – The Majesties settles into a solid, if unexciting groove.

And then Tsao decides to end her novel with a one-two punch of silly twists. The first isn’t too offensive, just a little bit hackneyed. The second, however, is mind-blowingly stupid and unnecessary. It’s hard to express the magnitude of its awfulness without ruining the ending, but trust me on this one: it’s the kind of twist that makes you want to throw the book across the room in sheer disbelief. Not only is it ridiculous, it undermines any investment you may have made in the characters.

Which, to be fair, is probably not a lot. Aside from the shenanigans of the final stretch, the main problem with The Majesties is that none of the people involved are at all interesting. Tsao spends plenty of time on her intricate plot, and nowhere near enough on making the family caught up in it seem like anything but sketches whose sole personality traits are obscene wealth and a seemingly infinite capacity for doing bad things. Even if the dumb twist had been excised, the lack of any engaging characters was always going to be the fatal flaw.

The Majesties is published by Pushkin Vertigo on 6 August 2020