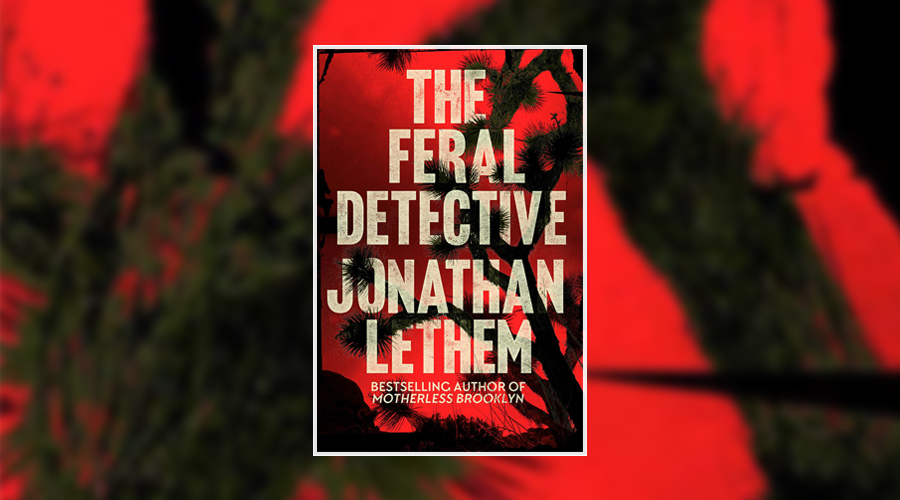 ‘Post Trumpian’ writing, if that’s the coined phrase yet, has been predominantly focussed on non-fiction titles in the past couple of years – Fire and Fury by Michael Wolff and Collusion by Luke Harding being some of the most successful. Yet there have been decidedly less novels that have overtly explored this new chapter of history in the United States on the shelves, perhaps for the very fact that in this instance, truth has proved stranger than fiction.

Jonathan Lethem in his latest, The Feral Detective, is nothing if not overt on the subject. He is previously well known for his ‘genre bending’ fiction that moves been science fiction and classic detective tales, as seen in books such as Motherless Brooklyn. In The Feral Detective, he returns partially to this detective/mystery theme, with the main thread of the novel following the search for a missing teenage girl in the desert hinterlands of Los Angeles, although there are several diversions into surreal set pieces throughout the book.

The story is told through the perspective of Phoebe, a recently unemployed New York Times journalist in her thirties, on the hunt for her best friend’s daughter Arabella, who had gone missing from her college campus. The novel takes place in the aftermath of the November 2016 US elections and in the run up to the inauguration of the ‘Beast elect’, as Phoebe describes him. She seems to be in utter shock at the result and the apparent disconnect between her New York bubble and those hordes of ‘deplorables’ that voted for Trump, to reuse the popular phrase at the time. Her determination to find Phoebe is not entirely unselfish, as by travelling to rural America she hopes to redeem her journalistic reputation and pop that New York bubble by somehow meeting and comprehending these ‘other’ Americans that could have possibly voted for such a man.

Phoebe’s internal, and external, dialogue is snappy, sarcastic; the textbook definition of ‘a hot mess’, between the job loss and Tinder hook ups, where I think the idea was to draw Phoebe as a female antihero. It’s not these aspects that make her particularly unlikeable however, more that arrogant ‘judgemental Acela corridor elite’ (as she describes herself) perspective on the world that makes her hard to warm to.

I don’t know how much of this is drawn from Lethem’s own experience of the Trump election, being a part of the metropolitan creative elite circles himself. Perhaps it’s only in hindsight that this perspective seems particularly naïve and simplistic, more aware as we are now of the global rise of populism and right wing politics, and its myriad of complicated origins. Phoebe is obsessed with these unknown voters in an increasingly irritated way, at one point shouting randomly at the gathering of the Bears and Rabbits, groups of off grid hippies in the Californian desert, ‘did you guys even vote?!’

She is instantly attracted to the detective of the title, Charles Heist, who in the first chapter she enlists to help her find the missing teen. This could only be imaginable due to his polar opposition to the arrogant, dangerous buffoonery of Trump. Heist is instead a cartoon of the classic American cowboy – silent and sultry, in touch with nature, at times sensitive. Despite being a grown woman in the 21st century, Phoebe then spends the rest of the novel following him on various capers through the mountains and desert, with little apparent agency of her own. This is primarily what caused the novel to be an increasingly frustrated read, as well as the fact that the mystery at the centre of the story becomes insignificant in favour of surreal symbolic set pieces, causing the story to then drag considerably through its picaresque scenes.

Lethem’s writing is decidedly acerbic and sharp, which makes the book initially enjoyable and easy to read, but moments which should have had emotional impact seem to be rushed over, or distracted by Phoebe’s all-encompassing and incomprehensible devotion to Heist.

It’s an interesting premise that loses the thread of the tale with overwrought symbolism and misjudged character development. The great post-Trumpian novel still awaits.

Theatre Review: A Super Happy Story (About Feeling Super Sad) at The Vaults