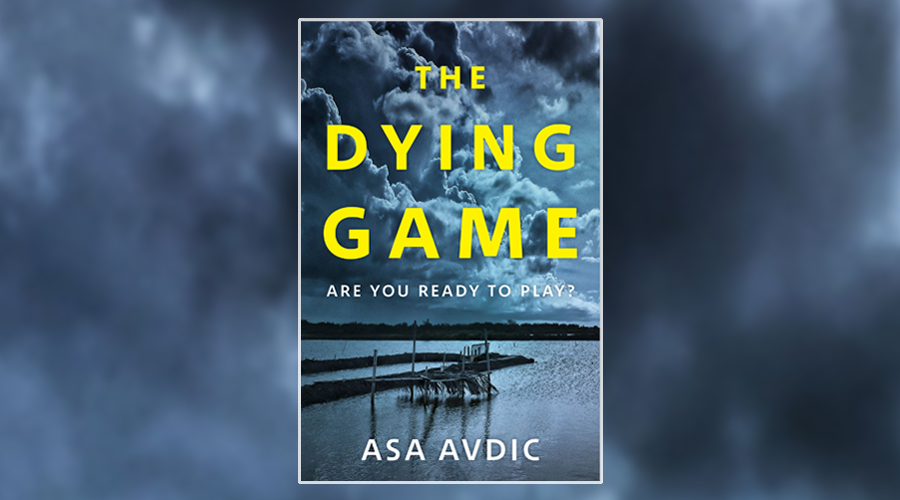 Asa Avdic’s debut psychological thriller, The Dying Game, is a contemporary locked-room mystery that takes place in a near-future Sweden. Blending the twisty multiplying crimes and isolated setting of Agatha Christie’s And Then There Were None with the paranoid dystopian themes of The Hunger Games, it poses question after question, mystery after mystery, to keep readers guessing at what’s actually going on.

It’s 2037 and Sweden has been part of the Union of Friendship since the 90’s. The story’s primary protagonist, Anna Francis, is a workaholic who’s haunted by her time working in a war zone and has a nine-year-old daughter she hardly ever sees. So when she’s offered the opportunity to take part in a forty-eight hour test on the remote archipelago of Isola, along with six other candidates vying for a secret intelligence position, she sees this as her chance to set things right and make up for the past she’d rather forget.

Only Anna isn’t actually a candidate – she must observe the others to determine which of them is best suited to the role, despite not knowing what the role in question is. Anna’s assignment is to stage her death on the first night and disappear underground, where she can watch the candidates from inside the walls of the house to see how they handle the news of her ‘death’, as well as the threat of a potential murderer amongst them. But Anna’s task is far from straightforward and, as the rules of the game begin to shift, Anna starts to lose control of the situation, as well as herself.

The story begins from Anna’s point of view but darts between other characters as the drama unfolds, revealing events from varied perspectives both during the experiment and in subsequent interrogations, where it’s clear something went drastically wrong. Avdic ekes out the titular dying game, never revealing answers until it’s necessary and even then, some things are left a mystery, open to interpretation. There’s a feeling of creepiness right from the first chapter, as seemingly clueless characters head into a situation that’s set-up to string them along.

From start to end, Anna remains a tricky character to empathise with because she’s so detached. She’s clearly miserable with her life and has shut herself off from the world, even going so far as relinquishing parental rights of her daughter, but her personality is a closed book. This extends to the other characters too, chiefly Anna’s colleague Henry, who’s the other main POV. Instead of getting into their individual mind-sets though, we view them from the outside, almost as if we, the readers, are a part of the observation assignment. This can be frustrating, in that you never feel like you understand who these characters really are or what drives them.

Where the novel gets interesting is in trying to decipher who’s telling the truth and which of the candidates is in on the game, if any of them. The interrogations amp up the tension, as multiple characters get the opportunity to give their two cents’ worth. It’s just a shame these same characters remain empty shells with ambiguous motivations, even after they give evidence.

Despite not being quite the thrill-ride the title suggests, The Dying Game is an eerie and atmospheric book that works best as a cautionary suspense story exploring power plays and totalitarianism.