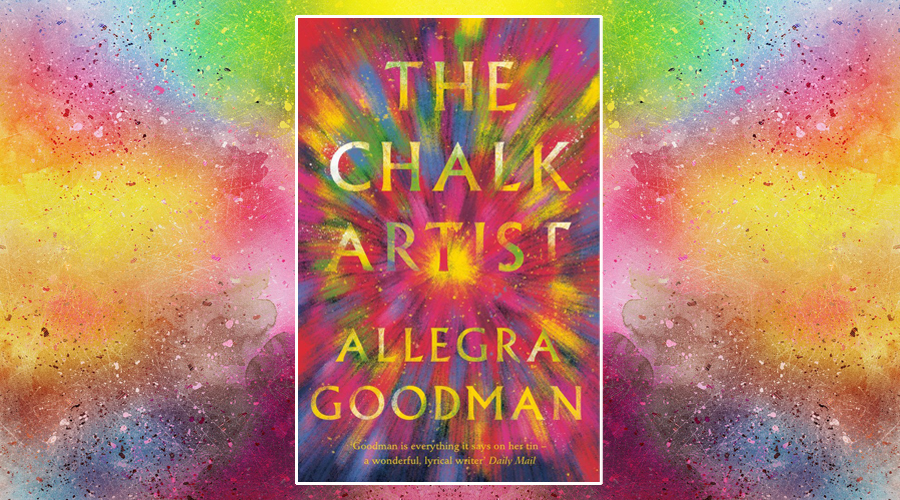 The colourful chalk bomb cover might be what initially attracted me to New York Times best-selling novelist Allegra Goodman’s latest novel, but what kept me turning the pages was just how thought-provoking The Chalk Artist is. Exploring what happens when art and virtual reality collide, it tells the story of a love affair between two people – one who thinks that everything in life is fleeting, and the other who believes that things are meant to last.

Collin James is a college dropout and talented chalk artist who instead of using a canvas, decorates the streets of Cambridge, Massachusetts with his beautiful drawings. He’s young and creative yet unfulfilled, making minimal money by waiting tables and designing artwork for his friends’ amateur dramatics. Collin lives his life by the idea that nothing is built to last, as temporary as the chalk that he wipes away the moment he’s completed his creation. But then he meets Nina Lazare, who might just be the one thing Collin wants to last forever.

A struggling teacher and the daughter of a tech mogul who’s revolutionising virtual reality gaming, Nina just wants to give back to her students but she’s having trouble getting through to them. In a world of VR and AI, Nina doesn’t know how to make her students care about the things she cherishes like poetry and Shakespeare, which is why she finds inspiration in Collin – whose alternative attitude could hold the key to helping her engage with the youngsters.

Amongst these young students are twins Aidan and Diana – both struggling on their path to adulthood. Aidan has an unhealthy addiction to EverWhen, the game world created by Nina’s father, and Diana is uncomfortable in her own skin, unsure of her own identity and unable to confide in the brother she was always so close to. These four people’s lives are all connected through art and alternate realities, as they’re forced to make decisions over which reality they want to exist in.

“How strange the way an imaginary disease became a real threat, rogue gamers a financial liability.”

In an increasingly digital oriented world, The Chalk Artist questions whether we rule technology or if we’re ruled by it. Can tangible things like art and literature compete with virtual worlds that allow us to travel anywhere, experience anything and be whoever we want to be? And what about love…how can we tell the difference between love and infatuation when it’s felt through a computer screen, rather than in person?

Goodman’s characters aren’t perfect; they’re ruled by their environments and situations. As Nina pulls away from her father’s toxic world, Collin is drawn towards it, and as Aidan sinks further into virtual reality, his twin Diana finds solace in words – expressing her confusion, frustration and anger in the journals she writes for school. This constant shifting of perspectives makes for an interesting read but it does steal the attention away from Collin and Nina’s love story, which is the backbone of the story.

The one disappointment with the characters is that they never really surprise you – they act exactly as you expect them to act and don’t deviate away from their respective roles in the tale of art, love and loyalty vs. virtual reality and technology. As a result it doesn’t give the book much light and shade, with the story petering out a bit at the end.

However, it’s in the descriptions of the virtual world – which feels every bit as authentic as the real world – and Collin’s exquisite art that The Chalk Artist comes alive with a sparkling intensity. The imagery Goodman conjures is beautiful, vibrant and, at times, magical, and the descriptions linger long after the book ends. It helps to give a brilliant insight into the often fanatic world of MMORPGs (massively multiplayer online role-playing games), as well as the game development process, and how it can be detrimental to people’s health when taken to the extreme.