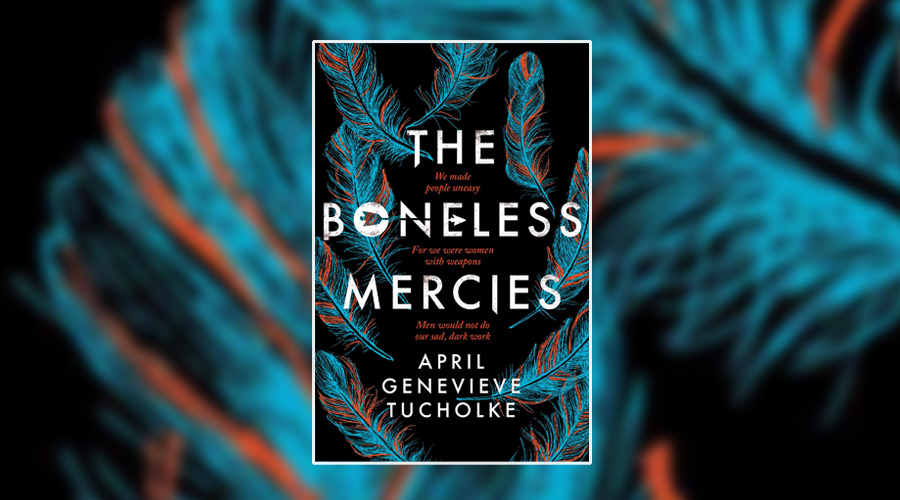 Epigraphs don’t get any better than the one in April Genevieve Tucholke’s The Boneless Mercies – the American author’s fourth book but the first to be published in the UK. “I shall gain glory or die” comes from Seamus Heaney’s Old English epic Beowulf and it instantly tells us a lot about Tucholke’s gender-bending reimagining. This is a tale of fierce and unforgettable characters that would rather die than be defeated, and it sets the dark and mythical tone for the entire book.

Tucholke’s protagonist Frey wears that Beowulf mantra on her sleeve. Along with her allies Ovie, Juniper and Runa, they are the Boneless Mercies – girls hired to perform mercy kills. They must be quick, they must be quiet and, true to their collective name, they must be merciful. The four girls live a nomadic, solitary life, roaming the lands and carrying out their kills. But they’ve grown weary of the death trade, each of them dreaming of a better life that doesn’t require them to constantly, too often literally, have blood on their hands.

Frey, in particular, yearns for something more; she wants fame, fortune and the freedom to choose her own future. So when she hears of an unstoppable monster slaughtering men, women and children in a nearby town, Frey knows this is the Mercies’ chance to escape their macabre trade. She’s determined to do what no man has been able to achieve – slay the beast and save the people. So with her Mercies by her side, they set out to hunt this monstrous creature. If they fail, they die. If they succeed, they will change not just their fates, but also the fate of girls everywhere, forever.

“This is a story of heroes, of Mercies and witches, of marshes and Merrows, of reeds and thorns, of women and giants, of bravery and friendship, of an age that’s ending, and one that’s about to begin.”

The Boneless Mercies is all about the slow, brooding set-up. We meet the Mercies at a crossroads; they’ve all experienced loss and they’re all broken in different ways, with pasts they find difficult to talk about. They’re a makeshift family and, whilst they make all their decisions together, Frey is the unofficial leader. The others listen to her and they trust her unreservedly. She’s the kind of heroine epic fantasy tales were made for – one who fights to prove herself and, in turn, demonstrates that women can be just as strong, tough and ferocious as men. She doesn’t see her gender as a hindrance (as it shouldn’t be), and uses her lightness, speed and cunning to her advantage. Because of this, and so much more, Frey is one of the best female characters you’ll encounter in fantasy all year.

It’s not all about Frey though; the Mercies are a solid team, and what comes through so well in this book is the power of trust, love and loyalty. These girls might not be related by blood, but that doesn’t make them any less devoted to each another. If one of them flies into what seems like an impossible fight with a monster, the others will be right behind, axes, knives and bows at the ready.

Tucholke is inspired by the classic tales of old, and the influence of dark folklore and mythology pervades every page, giving the story an ambitious saga-like feel. With such a tight focus on the Mercies though, the male characters do get short changed, which is perhaps the point of such a feminist tale. However, it’s a shame when there are a couple of fascinating men such as aspiring healer Trigve, the Mercies’ travelling companion, and Jarl Roth, a character we meet towards the end of the book who is way too charismatic to have such a small part. There’s a smidgen of romance as the story comes to an end, which is a bit of a tease for those who like action and romance to sit side-by-side in fantasy. But, for the most part, Tucholke balances all the elements of her tale with an assured hand.

‘This is not the end of my story’, Frey tells us at the end and I wholeheartedly hope it’s not. With witches, mythical creatures, rich landscapes and a cast of multi-layered, formidable characters, The Boneless Mercies is a thrilling story that will have you hungering for more.