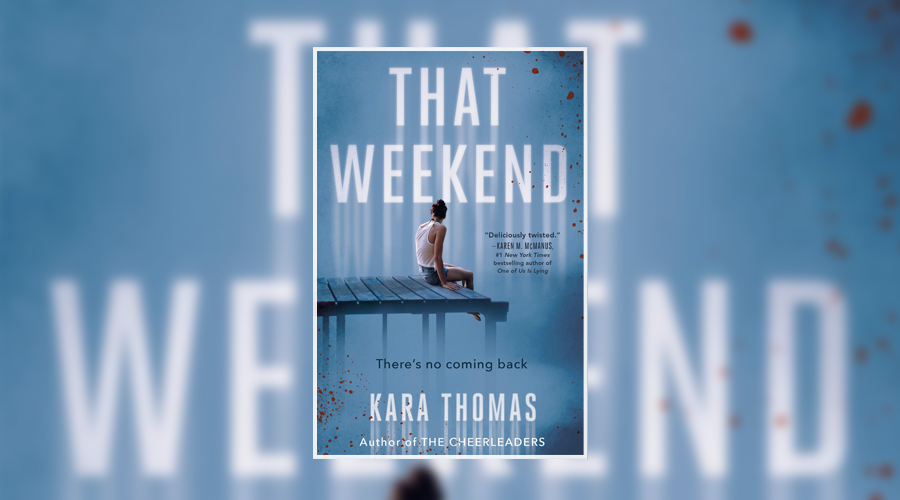 Kara Thomas’ That Weekend is a lot of things. It’s creepy, gripping, tense from start to finish and packed with lots of unexpected twists and revelations. It definitely benefits from readers knowing as little as possible going in and it’s also one of the best YA mystery novels I’ve read in recent memory. From start to finish, That Weekend offers up a compelling mystery read as well as a story that has its characters at the forefront of everything it does, exploring how long-held secrets can shape relationships and alter our perceptions of one another. And, best of all, it does all of that in a quick and gripping story that’s as brilliantly entertaining as it is shocking and unpredictable.

The novel follows Claire Keogh, who was supposed to be having the perfect prom weekend getaway with her friends at a lake house in the mountains. When she later wakes up alone and covered in blood on a hiking trail, however, it’s clear that something terrible has happened. With no memory of the last 36 hours and her two best friends Kat and Jesse now declared missing, Claire is desperate to find out about what happened on the mountain and she knows the answers are somewhere in her memory, if only she could access them. But, as Claire soon learns, everyone has secrets, even her best friends, and it’s soon evident that she may not like what she uncovers.

“I try to reach back, to this morning again – waking up, loading our backpacks – but nothing is there. I was supposed to be with them, so why did I wake up on a mountain alone?”

With The Cheerleaders, Thomas made a name for herself as a great young adult mystery thriller writer, but That Weekend sees Thomas come into a league of her own, delivering a tightly-plotted, fast-paced thrill ride of a novel that you won’t want to put down. It becomes very clear early on that this is truly a dark mystery novel, and it’s held together brilliantly by Claire, who quickly becomes a character you root for thanks to Thomas’ brilliant characterisation. Through every twist and turn, Claire’s emotions always feel honest and real and, as readers, you’re left feeling every bit as frustrated, angry and suspicious as Claire is the further she delves into the mystery of her friends’ disappearance.

It’s no surprise either that the novel benefits from sticking closely to Claire too, casting suspicions on everyone around her as she questions what she remembers and how the pieces all fit together. It’s so well done, in fact, that it makes the moments that Claire decides to explore some of her own theories beyond the official police and FBI investigations feel like more of a necessary move rather than a ridiculous one, as can often be the case in YA mystery novels when the teens decide to investigate for themselves.

And really, the fact that Thomas is always able to keep her characters recognisably as teenagers throughout the novel is something that deserves acknowledgement too. There is a lot of growth in this book, particularly for Claire herself, with the use of flashbacks to paint a typical teenage life used very well here to contrast the very scary, very adult situation that Claire finds herself in soon afterwards. Not at any point in this novel, though, did Claire feel like a seasoned detective or someone with more answers than those doing the official investigation. Even when making discoveries of her own, they all felt very within the remit of believability, using the kind of hunches and tech-savvy that you pick up through day-to-day life and not through years on a police force. Yes, That Weekend feels unrealistic at times, particularly in the denouement, but it’s balanced well, and the novel doesn’t shy away from addressing Claire’s subsequent trauma either, which was another one of the novel’s many strengths.

Ultimately, everything comes together to create a story with plenty of secrets, twists and hints that are expertly buried within the narrative – cleverly signposted when you know what you’re looking for, but still hidden enough to ensure that readers will never be able to uncover all of the shocks that this novel holds ahead of time. The one detriment to this, however, is that when the revelations do start coming, the narrative does get a little choppy with lots of flashbacks and different perspectives to fill in the gaps, which feels a bit uneven until you make it through to the final chapters, when the payoff is a very tense, quick-paced run of action and thrills.

In short, if you’re already a fan of Kara Thomas after reading The Cheerleaders, then you’ll love this book. But even if that book didn’t quite live up to expectations for you, That Weekend is strong enough to convince you to give this author another chance, and Thomas will more than rise to the challenge. With lots of deep-rooted secrets to uncover, complicated relationships to untangle and yes, a twisted mystery to solve too, That Weekend is a book that will keep you reading, keep you guessing and keep you thinking about it long after you turn the final, chilling page.