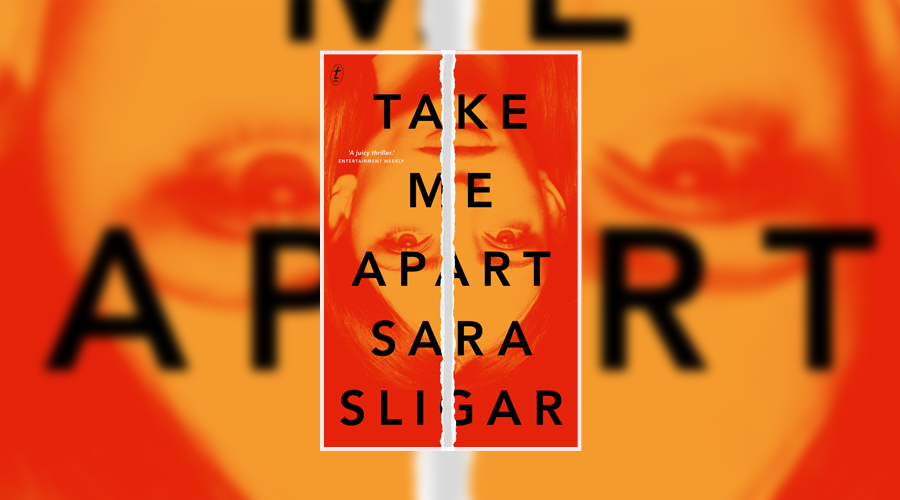 Some thrillers are flashy, hiding jumps, scares and big reveals to keep you turning those pages. Other thrillers enjoy drawing out the suspense for longer, creating an ever-increasing sense of dread that slowly takes over the entire reading experience. Sara Sligar’s debut novel Take Me Apart is firmly in the second category.

At its core, this novel is centred on two young women, as well as their struggles, their secrets and their lies. The first woman is famed photographer Miranda Brand, whose violent and unexpected death sent shockwaves through the art world and the local community in the early ‘90s. The second woman is former New York journalist Kate Aitken who, decades later, is hired by Miranda’s son Theo to create an archive of his mother’s work, most of which has been left untouched in the years since her death.

As Kate begins to work through the personal effects that Miranda left behind, she begins to put together a portrait of the woman she was, piecing together the life of a woman who was struggling with motherhood, her marriage, her career and her legacy. Soon Kate’s work turns into something more of a dangerous obsession and she becomes determined to unravel the mystery of Miranda’s shock death, all the while navigating the local rumours about the Brand family, her growing attraction to her boss and the aftermath of the events that pushed her to leave New York in the first place too.

“It felt like the Brands were a planet and she was some space junk that had been set in orbit around them. Kept close by a gravitational pull.”

This is a book that feels like it could be held up as a prime example of what it means to be a slow-burn suspense novel. In the grand scheme of the narrative, not a lot actually happens throughout Take Me Apart, and anyone hoping for an action-packed thriller with shocks, red herrings and explosive drama aplenty will not find what they’re looking for here. And yet, even through the slow and steady pace that this novel maintains, there’s a tenseand sinister atmosphere that lingers on every page. As Miranda’s story gets steadily darker, unfolding through newspaper articles and the letters between friends uncovered through Kate’s archiving, as well as the diary that Kate discovers in the Brand house too, Kate falls deeper into an obsession with discovering the truth, and is determined to do so at whatever cost.

Through the earlier, slower build-up of the present-day section of the novel, there are plenty of hints at interesting plot points and uneven power dynamics at play – and the promise of those coming to fruition is a key motivator to keep reading. From the very beginning of the novel, it’s clear that Kate is holding key information back – both from her new boss and from the reader – and it only adds to the general feeling of unease that underscores a lot of Take Me Apart. It’s difficult to know Kate’s true intentions, and as different accounts of Miranda’s life and death come to light, the question of who to trust is at the forefront of every interaction. The dual timeline aspect is done well here, too, helped by the multimedia approach Sligar adopts to telling Miranda’s story, especially the diary entries that serve as the main insight into Miranda’s world.

Even so, as is often the case with dual timeline stories, one narrative strand did stand out over the other, and in Take Me Apart it’s Miranda’s story that proved to be the most complex, the most absorbing and the strongest – not to mention it’s the strand that provides the most clues to the central mystery of how Miranda died. By contrast, Kate’s pseudo-investigation into Miranda’s suicide over 20 years after the fact is directed largely by local rumours and gossip; the resulting ‘interrogations’ of those connected to the case feel superfluous and lack any suspense, especially when paired alongside Miranda’s own painful story unfolding in real time and in her own words.

And therein lies one of the biggest frustrations that this novel faces. Both Kate and Miranda’s stories are moving and powerful ones, and there’s a lot that connects both women. At different points in each of their lives, both Kate and Miranda have faced mental health struggles and both have had the course of their lives changed by the men around them. Each of their storylines offer a character-driven exploration of mental illness and its impact on their lives and the lives of those around them, but for all the shared struggles, it often feels like there’s a lack of cohesion between the two stories being told. The archival material we’re shown to tell Miranda’s story runs chronologically and independently of the work Kate is doing; there’s very little overlap between what we’re shown and what we’re told that Kate has found. I would have liked to see a bit more made of the archive materials themselves and Kate piecing together the mystery through them, rather than overly relying on Miranda’s journal to tell a tidier, linear story.

Take Me Apart isn’t a thriller in the traditional idea of the genre, but it still delivers a tense and unsettling read, even as the story itself feels like a documentation of the mundane, more often than not. There’s a lot to recommend this novel – particularly the striking imagery that Sligar uses throughout, and the slow unveiling of the stand-out, complex character that is Miranda – but ultimately this novel felt a bit too uneven to really come together as a whole.