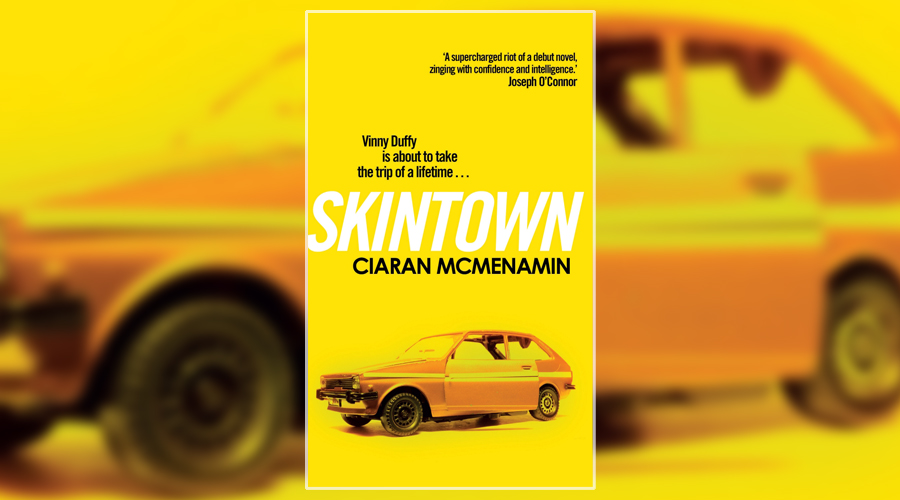 Set in Northern Ireland in the 1990’s, Ciaran McMenamin’s Skintown is a tale about survival in uncertain times. There are enough historical nods to the surroundings in which best friends Vinny and Jonty reside to create an atmosphere of dread but also, bizarrely, excitement.

It’s easy to notice the parallels with Trainspotting, but the characters in Skintown are far more sympathetic. Vinny and Jonty’s friendship isn’t merely based on drink and drugs, although like most small towns there isn’t much else to do. The 90’s setting is a slightly heavy-handed blast of nostalgia – you can almost hear the acid house pumping through the pages – and it’s sometimes a bit frustrating.

At times, the novel becomes a little over descriptive in a way that’s common with new writers; things that could be said in one sentence can feel drawn out. However, the quick changes in scenes from each short chapter is a great tool and very well used. It creates some confusion and a similar kind of rhythm and energy that reflects the hedonistic atmosphere the two main characters are escaping to.

Like Trainspotting, it has harrowing parts but it’s dripping with dark humour that helps to give an authentic voice to the characters. It deals with the religious unrest at that time in a way that seems to be in line with the 18-year-old protagonists and what they would have experienced, and is naive in a way that instead of feeling un-researched feels honest.

McMenamin is an actor by trade and this is evident in the way that he writes. The story is incredibly visual and aspects of the book do read like that of a script. You can tell he’s a fan of dialogue and Skintown could easily be adapted for TV – in fact I would be surprised if it isn’t at some point in the near future. With the release of T2 and the current trend of 90’s nostalgia, it could easily fit into the current offering of any streaming site or channel.

Skintown is an interesting novel that has a unique voice, but if it weren’t for the well-crafted nature of the protagonists I think the plot would have fallen quite flat. It’s a drug/sex filled adventure that’s got me curious as to what Ciaran McMenamin will write next.

Skintown was published by Doubleday on 6 April 2017