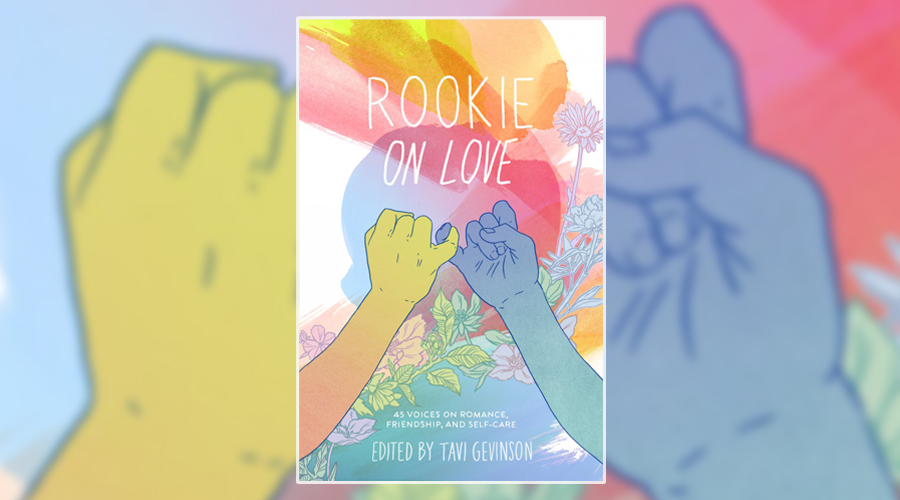 To quote Ewan McGregor in Moulin Rouge: ‘Love is a many splendored thing.’ Although his infatuated character Christian was talking about falling in love in the romantic sense, the sentiment is true for all kinds of love; whether that love is for another person, for yourself, for a thing, for an idea or a feeling, for a moment in time, or for the entire world and beyond that too.

This is what Rookie on Love – a single-subject anthology edited by RookieMag.com’s editor-in-chief, Tavi Gevinson – explores through essays, poems, advice, interviews, comics and stories. Starting with Rookie reader Lena Blackmon’s short but sweet Postcards from Apollo 6 poem, the written collection moves on to sage advice about dealing with rejection by channelling that unrequited love – perhaps the most heart-aching kind of love for a teen – so that it circles back to yourself.

In Ogechi Egonu and Ugochi Egonu’s Binary Planets, the unique and innate bond between twins comes to the fore, as the sisters weave in themes of independence, identity, growing up and apart both emotionally and physically, and finding solace in each other when life throws curveballs.

Jenny Zhang’s Beyond Self Respect is a piece of writing that I wish had existed when I was a teenager. The once regular writer for Rookie and recent author of story collection Sour Hearts perfectly captures the importance of respect for young girls; how people earn it, who ultimately gets it, and who absolutely doesn’t deserve it.

With over forty contributions from writers, artists, teens and grown-ups, Rookie on Love ranges from heart-warming and funny to illuminating. Whether it’s novelist Emma Straub extolling the magic of books, singer-songwriter Mitski Miyawaki recounting her devotion to music, or Esme Blegvad’s comic illustrating what heartbreak feels like, there’s something inherently relatable and reassuring about reading all these conversations about love, friendship and ourselves (and the many other emotions and feelings those three things evoke).

Rookie on Love is a book that emanates warmth and understanding. Aimed at teenagers and young adults but written by women, there’s a little wise life and love advice in there for all of us, regardless of age.

Rookie on Love was published by Razorbill on 2 January 2018