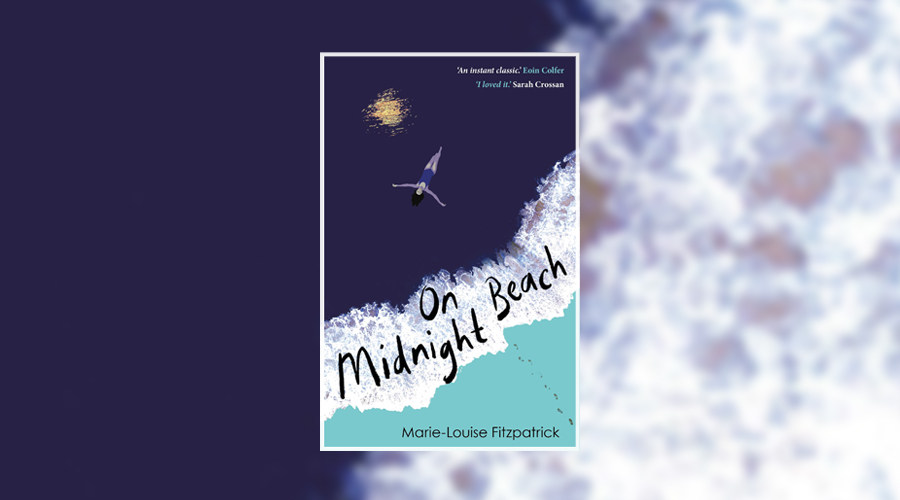 Inspired by the old Irish legend known as the Táin Bó Cúailnge, Marie-Louise Fitzpatrick’s On Midnight Beach is a coming-of-age story of love, loyalty, community, deep-rooted feuds and tragedy of Shakespearean proportions. It’s set during a long, hot summer in 1976 and tells an intoxicating tale of hostility between two opposing towns in Ireland whose long-standing grudge bubbles over into something much more dangerous.

When a dolphin swims into the bay of their seaside village one day, Emer and her friend Fee are enchanted by its sudden presence. But that’s not the only thing that captivates the two teenage girls that day. On the beach they encounter Seth ‘Dog’ Cullen and his friend Kit, and the four of them begin sneaking out to the beach at midnight to swim under the moonlight with their wild visitor, who they name Rinn. Emer is smitten with Dog – a boy who is both fearless and thoughtful, aggressive and gentle, and who garners the respect of both his contemporaries and elders. Emer knows that she shouldn’t fall in love with Dog, that her strict, religious father wouldn’t approve, but she’s never felt more alive.

News spreads of a dolphin and soon swathes of tourists arrive in Carrig Cove to catch a glimpse of the lively new resident. Emer’s village thrives with the business that ‘dolphin fever’ brings but resentment is building in the neighbouring town of Ross, whose rival faction of teenagers set out to steal back the tourists and lure Rinn away too. With the temperature rising, a tense undercurrent simmers in the air. These teenagers have everything to fight for – their dolphin, their home, their respect – and everything to lose too. And for some, the loss will be more than they could have anticipated.

“I kept clear of Dog Cullen. Till the summer we turned seventeen, the summer the dolphin came to Ross Bay. That summer I looked in Dog Cullen’s eyes – one green, one blue – and I forgot to walk away.”

Better known for her bestselling picture books, Marie-Louise Fitzpatrick’s first YA novel is an atmospheric retelling with a beautifully vivid sense of time and place. It’s a story rooted in Irish culture and reading it feels like wandering the craggy shores of Donegal. You can smell the salty air, feel the sun beating down on your skin, envisage the weathered men sailing out of the harbour on their fishing trawlers, see the mischievous youngsters wandering the streets as they seek some excitement in their insular village. The 70’s setting also provides a wonderfully evocative backdrop to the back-and-forth retaliations between the teenagers as their feud spirals out of control.

Fitzpatrick’s characters are vibrant and well-rounded; they act and speak like teenagers, which is so refreshing in a YA landscape of youngsters who converse either like adults or entirely in abbreviations and slang. That’s not to say Emer and Fee don’t have their own era-appropriate slang but it’s not overdone and it’s fully in keeping with the Irish setting. What’s also so engaging about On Midnight Beach is the endearing and sweet relationship between Emer and Dog, which evolves naturally and realistically. It’s kind of insta-love but it doesn’t for a second feel that way.

Giving us a glimpse into the mounting tension on the rival side are chapters told from the perspective of Gus, a boy who grew up in Carrig Cove and then moved to Ross. He’s an outsider and doesn’t really fit in with either side and yet he still finds himself at the centre of the battle over Rinn. Gus’ part in the story is as vital as Emer’s as he gets dragged into a fight he never wanted to be a part of in the first place and is unwittingly pitted against the one person he actually still cares about in Carrig Cove: Dog.

Fiction is full of rival gangs scuffling in the streets and fighting to save face (West Side Story and its inspiration Romeo and Juliet spring to mind) and it never ends well. The climatic tragedy here is inevitable and it’s a credit to Fitzpatrick’s subtle writing that it has such an emotional impact without being mawkish. The characters’ grief and loss is collective and if you’re as captivated by this story as I was, you’ll feel it too. It doesn’t make for a particularly happy, or even satisfying, end – but then life isn’t always happy or satisfying.

On Midnight Beach is Faber Children’s only YA offering for 2020, and if you’re going to publish just one YA book in an entire year, make it as good as this one.