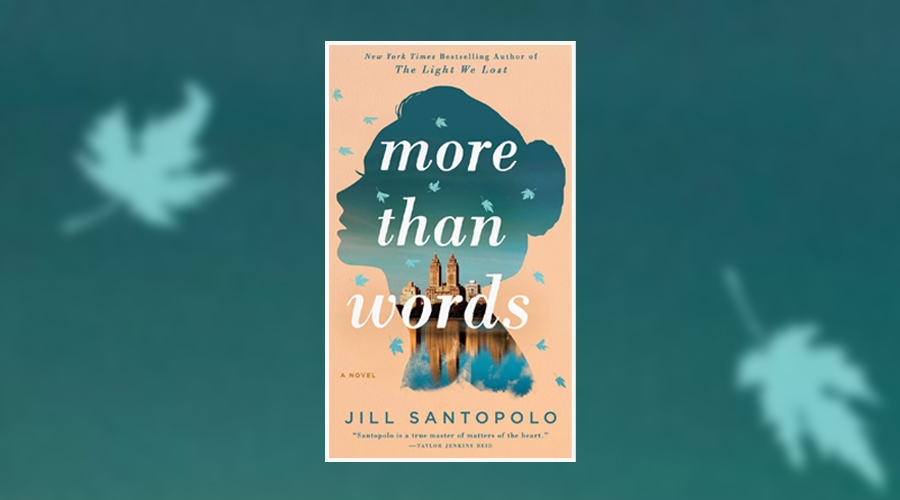 More Than Words is a beach read for those who enjoy novels about people getting a makeover and claiming their individuality, with a good dose of forbidden romance and a little sex thrown in. It does all of this in a relatively unsurprising way, though there are some more impactful scenes when it leans into the emotional beats.

Jill Santopolo’s second novel is the portrait of a wealthy woman who is having a quarter life crisis following the death of her father. Nina Gregory is the heiress to a chain of hotels and is expected to take over the legacy of running the Gregory Corporation, a role that she’s been molded for her entire life. A job that she seems to be completely fine with until she actually sees it coming down the road.

A one percenter doesn’t make for the most relatable protagonist, and Nina seems not to relish the glamour of her world that might make the story more exhilarating, as in the Gossip Girl series, or shuck it completely in a rebellious turn. She is a cog in this privileged machine, though has tendencies towards the charitable, which is alluded to with her work as a speechwriter for an aspiring Mayoral candidate.

This is 21st century Age of Innocence with societal expectations that seem to be both a burden and something that the characters are unwilling to give up. But then, the point of this novel isn’t to question what Nina should be doing with her father’s company when she takes over; rather its about her taking stock of her choices in life and the falsehoods that it’s built on and reacting to that. Her father’s impending passing is the catalyst for slow introspection which leads to her making new choices about the direction she should be taking.

Grief is supposed to be one of the featured factors in this novel, but it seems to take a backseat to the romance at the heart of the story. There certainly is grieving, and we all grieve in a myriad of ways, but it doesn’t really dive in and explore those emotions. Rather it skirts them in places, just enough to remind you.

Where Santopolo writes best is during the slower, emotional moments. The moments after Nina’s father dies are carefully done, letting you feel the grief that is overwhelming her. Similarly, when she visits one of her former homes, there’s a reminiscence that would strike a chord with anyone who has seen their family home after they’ve moved out or really moved out of anywhere that held important memories.

We get this in smaller doses in some of the interactions between Nina and the characters of Leslie and Caro. Leslie is her best friend and, because this isn’t a TV show where everyone stops by for three minute conversations, she has a few phone conversations that sound genuinely like two people who know each other deeply conversing. Caro also gives Nina some roundness by being a relatable presence, though these conversations are few and far between.

And then there are the men. Namely, Nina’s long-time boyfriend, Tim, and her love interest Rafael. Nothing about this set-up even remotely suggests that Tim is a romantic interest for her, but rather he’s expectation and habit. If anything, Tim is her friend with benefits, though that’s not how Tim sees it. Tim isn’t a wholly sympathetic figure; he’s probably upholding the patriarchy without thinking about it, but in that he’s non-threatening and is largely forgiving and trusting of Nina beyond what she feels she deserves. It’s an odd relationship dynamic.

Rafael is your typical romantic lead. Handsome, nerdy in ways similar to the protagonist, prone to suggestive remarks regardless of relationship status and open to flagrantly ignoring being in a position of authority because he likes her. There’s clearly supposed to be chemistry between these two but at times it veers into Mastermind’s Weirdest Specialist Subjects as they both pull scientific and linguistic facts from nowhere, explaining them in detail.

Santopolo does write some good sex scenes between Nina and her partners, though they’re quite brief, and, in those moments, you can feel there’s a ways with words and feeling that the author is tapping into. Perhaps more of a lean into this would’ve made the book more sensational and, therefore, enjoyable. If you need an easy read with a little romp and some heart, but not too much, this is the book for you.

More Than Words was published by Putnam on 7 February 2019