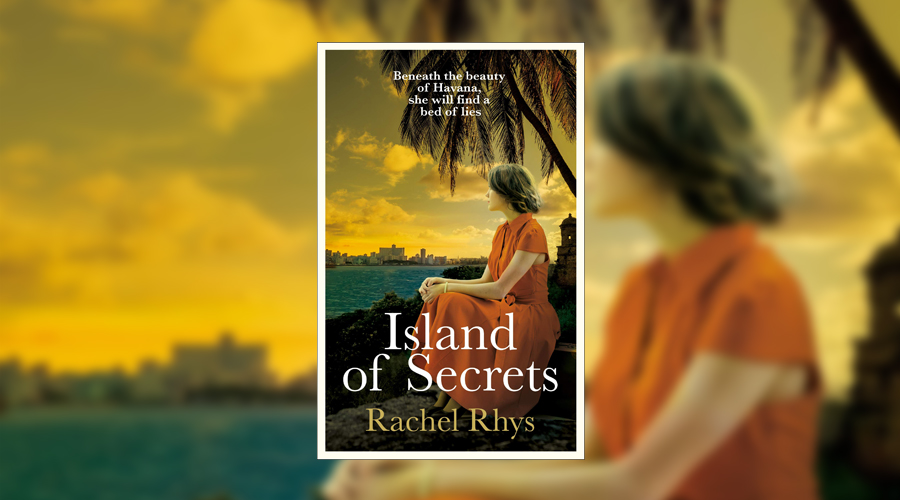 Nothing draws you in so completely as a Rachel Rhys novel, and her latest publication is certainly no different. Island of Secrets is a wonderful whirlwind of a novel that’s built on a heady atmosphere of sun, sin and secrets, and it revels in scratching beneath the surface level of glamour, fame and privilege to uncover the dark and ugly secrets underneath. Between Hollywood scandals, a murder mystery and a country on the brink of revolution, this novel offers up a decadent, dangerous story that dazzles just as much as it captivates – and it’s a true pleasure to lose yourself in every one of these pages.

Feeling bored, unsettled and desperate to escape her life working in the typing pool in Hemel Hempstead, Iris Bailey jumps at the invitation to travel to Cuba to draw portraits at the wedding of Hollywood director Hugh Hardman when invited to do so by the director’s wealthy socialite daughter Nell. Before long, Iris has jumped on a plane and is soon enthralled by the glitz and glamour of 1950s Havana, relishing the chance to soak up the brilliant blue sea and azure skies.

From nearly the moment she arrives, however, it’s clear that the Hardman family is hiding any number of secrets, and the draw of faraway, tropical Cuba is soon replaced with the reality of a country under the control of a corrupt government and growing rumbles of a revolution. As Hugh’s wedding approaches, Iris becomes trapped in a hotbed of simmering tension that threatens to bubble over with each passing day and so she becomes determined to uncover the truth behind the Hardmans’ dark secrets before it can tear all of their lives apart.

“How can she hope to capture a likeness if everyone here is hiding something? Havana and its visitors, it seems to her, are like the jasmine on the vine outside, only ever showing themselves in the dark.”

Island of Secrets is the third novel published by Rachel Rhys, the pen name of Tamar Cohen, and by now it’s clear that she’s picked up a formula that works – and works well. In this book, Rhys has honed each element of this formula to create an evocative whole: the lure of a hot, foreign country, a hint of romance and one deep-running mystery binding the motley cast of characters together throughout. The mystery at the heart of this novel is the suspicious death of a Hollywood icon, Jean Summers, following a birthday party for her husband, Hugh Hardman, on board his yacht. As the story unfolds it’s clear that many members of the Hardman family now gathering for Hugh’s next wedding know more than they’re letting on about that fateful night, and it makes for an intriguing narrative with plenty of twists and turns to keep you guessing.

Where Island of Secrets particularly excels, however, is its brilliant and vivid sense of time and place in bringing to life the sights and sounds of 1957 Havana, a time when celebrities and socialites flocked to the tropical island of Cuba to seek out the hedonism offered by its casinos, nightclubs and beaches even as the growing political unrest promised an imminent social upheaval. It makes it the perfect fit for the Golden Era Hollywood wedding at the heart of this book, which uses the show of wealth and extravagance of a ceremony befitting a Hollywood dynasty to disguise the darker history and web of secrets hiding just below the surface.

As entertaining as all of the novel’s Dynasty-esque revelations, drama and decadence are, though, there has to be a counterbalance, and Rhys provides that in the former of her heroine, Iris, a young ingénue from England who’s thrown into the deep end when she agrees to be a part of this wedding. As a character, Iris is strong and likeable, but it does take a while for her to come into her own, making the second half of the novel much stronger and a much more interesting read. While she starts out as a wide-eyed naïf who’s only too keen to put her trust in others and experience everything that Havana has to offer, Iris soon learns from her mistakes. The growth and development as she begins to see what life could be like beyond her Hemel Hempstead bubble serves her well in becoming a more realised and fully-fledged character by the novel’s end, even if she continues to be perhaps a bit too unrealistically invested in uncovering all of the secrets this family is hiding.

And that is really one of the only things that lets down this novel on the whole: the sheer number of subplots and misdirections that ultimately trail off into nothing or, conversely, come out of nowhere. Threatening notes sent and referred back to throughout the novel are explained away in a sentence, while an explanation to more physical threats are never given in the hubbub of exposition that is the final reveal. The romance between Iris and troubled photographer Joe was also a little too underdeveloped in my opinion, with the couple going from barely spending any time together before miscommunications and suspicious behaviour came along to challenge a relationship that had barely got off the ground.

These quibbles aside, however, Island of Secrets is an all-encompassing and delicious mystery novel that will transport you to a foreign country and a bygone era with ease, making this a difficult novel to put down. When I wasn’t reading this book, I was thinking about it and longing to revisit the sights, sounds and smells of Cuba that came to life within these pages. If foreign travel were a viable option right now, this would be the perfect novel to take on holiday and read on the beach but even without that Island of Secrets offers a gripping read and a thrilling distraction from the day-to-day grind.