Book Review: Fire on the Mountain by Jean McNeil 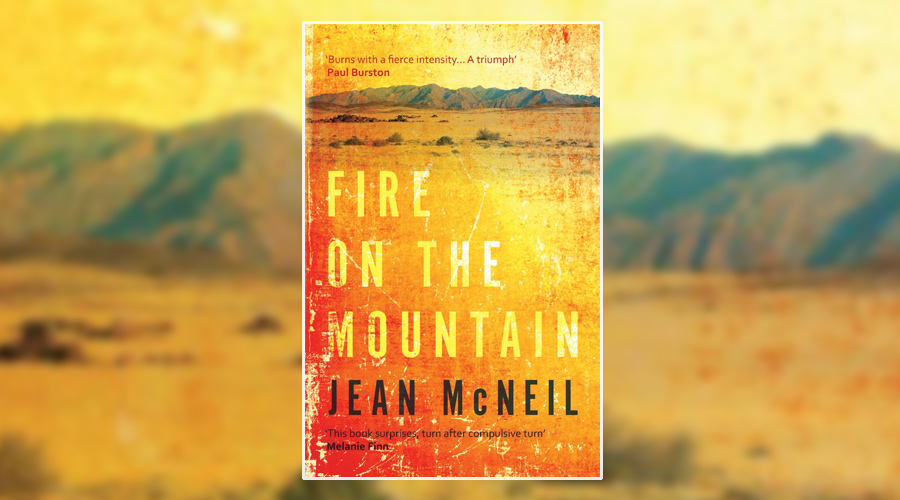 When NGO worker Nick drops unexpectedly into the lives of Pieter and Sara Lisson, he feels he has found the parents he never had. Nick is enraptured by their lives of splendour and acclaim as much as the stirring setting of the African city where they live, but he soon senses a secret at the heart of his new family.

Although it is never explicitly named, the distinctive mountain described at the beginning of Jean McNeil’s Fire on the Mountain will undoubtedly draw reader’s minds to Cape Town’s Table Mountain – rising ominously out of an otherwise flat African coastline – and the segregated, affluent white society dotted along its foothills that protagonist Nick is being driven towards, undoubtedly South African.

It does not, however, turn out to be the fiery mountain of the title, despite ominous warnings of forest fires impending on its hillsides – this instead being a reference to Brandberg Mountain in Namibia, which makes a later appearance in this short novel. It’s one of the few named locations in the book that’s a real place, as McNeil seems to deliberately keep place names and locations unclear; this does much to add to the uncanny, eerie atmosphere of the story, and as a result the location often becomes its most entrancing character.

Less can be said about the human characters, their coldness standing at odds with the African summer within which the book is set. McNeil populates this exploration of fate, relationships and spirituality with a cast of emotionally detached characters. Whilst they’re likely realistic portrayals of the types of characters you might find working in worlds out of the mainstream, such as novel writing, NGO work or psychology, as the principal characters all do, it does make them hard to become attached to. In a novel that is so intertwined around the beginning of a passionate relationship, this seems to be an element missing.

Within a few weeks of moving into their house, Nick is described as feeling like a second son to Pieter and Sara, but their interactions are not what you would think to describe as affectionate. There were also passages that felt achingly overwritten, and particularly in the parts of the novel focussing on Pieter, the revered novelist, excessive navel gazing on the nature of ‘the craft’.

For me, the latter half of the novel is decidedly stronger, when Nick joins Riaan – the Lissons’ son – deeper in an African desert and gets entangled in an expedition to save a supposedly psychic boy from a potentially dangerous pastor. This is where the descriptions of the unendingly harsh landscape really come to life. It is also where the other theme of the novel, that of fate or clairvoyance comes to the fore, with some flashbacks of Nick discussing the subject with a tarot card reading friend in Barcelona, and also with the young boy once he is found. The ambiguity with how much of this is reality for Nick is one of the novel’s strengths, leaving you with an uneasy sense of the unpredictable nature of life, the fleeting nature of human interaction and the power of the natural landscape.