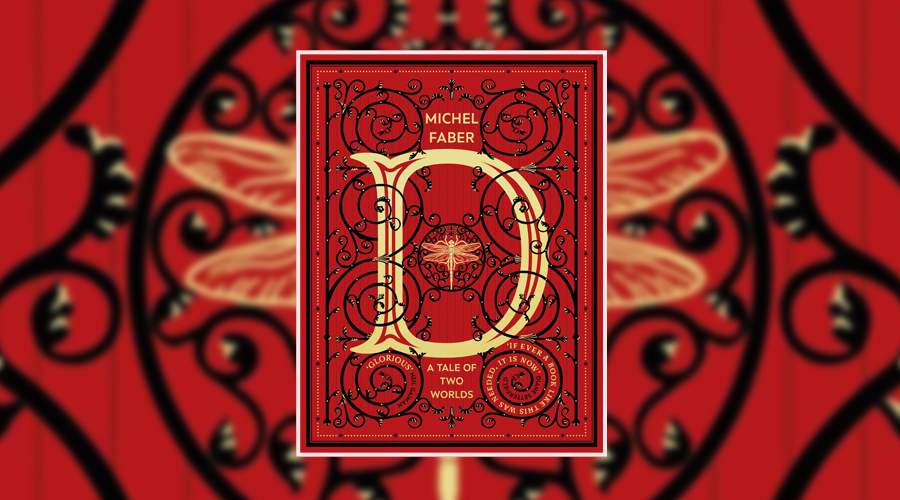 Where to start when describing the story held between the gorgeous gold-foil adorned covers of Michel Faber’s new novel, D: A Tale of Two Worlds? Billed as a ‘modern-day Dickensian fable which commemorates the 150th anniversary of Charles Dickens’s death’, it’s a fantastical novel that’s quite difficult to explain without going into too much detail. “It’s best if you just read it”, is a phrase I’ve uttered a couple of times since finishing the book myself, but in the spirit of reviewing, here goes.

When the letter D disappears from language, followed swiftly by place names and objects beginning with the letter D, it’s only a matter of time before Dhikilo Bentley herself ceases to exist. Adopted by a typically English couple from her native Somaliland, Dhikilo has always felt as if she’s on the outside, never quite fitting in. Which is just as well in this story, because it takes a certain kind of young hero, with a slightly different way of thinking, for the strange task ahead. Mysteriously summoned to the home of her old history teacher after attending his funeral, Dhikilo is entrusted with the perilous mission of saving the letter D.

What unfolds after her odd meeting at Professor Dodderfield’s run-down home is a wintery adventure that sees Dhikilo stepping through a portal door to the snow-filled land of Liminus, a world enslaved by the monstrous Gamp and populated by all manner of bizarre and frightening creatures. With the professor’s faithful Labrador-cum-Sphinx by her side, Dhikilo must journey through this curious landscape and help to overthrow the Gamp before his reign causes the letter D to disappear forever.

There are nods to lots of different classic novels within Faber’s story, chiefly the works of Dickens, including a peculiar enchanted hotel called Bleak House and the literal magwitches, who Dhikilo encounters early on in her mission. There are also welcome little hat tips to C. S Lewis (the door to a Narnia-like world) and the bizarre worlds of Wonderland and Oz, as well as more recent novels like Philip Pullman’s His Dark Materials. It makes the experience of reading D a rich and satisfying one, even if the initial task of reading chunks of text with the D omitted is a bit jarring. You almost have to learn to rewire your own brain to read and enjoy this novel as it’s supposed to be read and enjoyed.

With few key characters except a child and a faithful companion that can switch between domestic dog and mythical creature, this is very much Dhikilo’s story. Despite her strange situation, she’s an intelligent and resourceful young girl who could easily match the Pevensie children’s heroics. She spends a lot of time thinking about her heritage and the parents she’s never known, but it feels like an afterthought to make the character ‘different’, rather than a natural part of the narrative that enhances the unusual tale being told. As such, the story lacks the kind of depth that allows you to become truly immersed in the book.

Still, there’s no denying Faber’s imagination and clever knitting of a fantasy tale with a Dickensian twist. Whilst there is some appeal for adult readers (primarily the nods to other books), this feels like the perfect novel for youngsters who love quirky dark fairytales and inventive adventures.

D: A Tale of Two Worlds was published by Doubleday on 17 September 2020