Hero (Nicolas Cage) has been in jail ever since he and his partner committed a bank robbery with a body count. Years after the crime, he’s released by the evil Governor (Bill Moseley). There’s a condition, however. He must rescue Bernice (Sofia Boutella) from the Ghostland. And he will be dressed in a suit that’s rigged to explode if he doesn’t bring her back to the Governor in five days’ time. With no choice but to accept the assignment, Hero heads off on his deadly quest.

Although he’s been directing films in his native Japan for more than thirty years, where he’s built up quite a reputation for subversion and provocation, Prisoners of the Ghostland is Sion Sono’s first feature shot in the English language. By all accounts, Sono found a soulmate in his star, Nicolas Cage – the director cited one of Cage’s earlier projects, David Lynch’s Wild at Heart, as one of the chief inspirations behind his anglophonic debut. During pre-production on this movie, Sono suffered a heart attack, and it was Cage who suggested the project-saving idea of moving the shoot from Mexico to Japan. 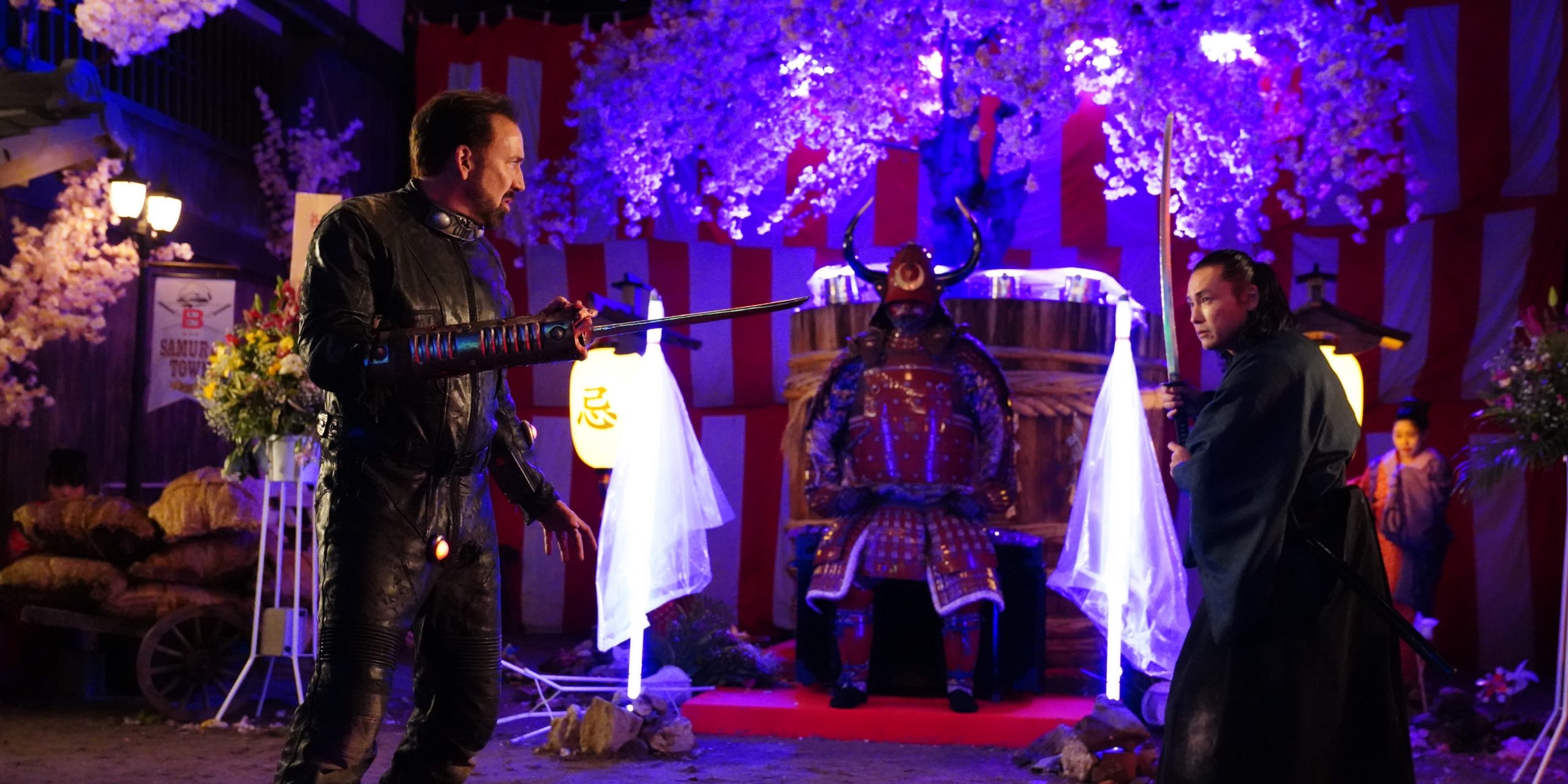 Cage’s notoriously deranged presence is the best element of Prisoners of the Ghostland – the film is weird and wild and unpredictable, often confusingly so, but Cage grounds the proceedings with his formidable charisma. It’s a difficult part to play – Sono asks him to adopt the mysterious cool of Clint Eastwood in his prime, and yet also to perform a delirious kind of dance routine when one of his testicles is blown off (it’s a long story…) – but Cage attacks the role with the characteristic verve.

Unfortunately, his commanding presence isn’t quite enough to stop the narrative from veering off into all sorts of unwieldy, and increasingly frustrating directions. Whilst there’s a pleasing simplicity to Hero’s initial task – find and rescue Bernice – he achieves that pretty quickly; once that’s happened, the increasing pile-on of flashbacks and time jumps and complicated backstory often means Prisoners of the Ghostland feels unnecessarily arduous. ‘Boring’ is the last thing you’d expect to be able to call a movie that contains the aforementioned scene with Nicolas Cage’s exploded nether regions, and yet the convoluted way that the story is told can sometimes make the experience tedious.

Still, if you aren’t too concerned with following the plot, there’s plenty to recommend Prisoners of the Ghostland from an aesthetic standpoint. Sono’s world-building contains an intriguing mix of cultures and time periods – there are people in kimonos and people in cowboys hats; ancient seeming villages full of smartphones and fancy cars. Bernice’s captivity sees her trapped inside the creepy uncanny valley outer skin of a mannequin, and the sequence dealing with her rescue is memorably unnerving. The singing (there’s a surprising amount of singing), the costumes, the outré sets – even when the narrative becomes a chore to follow, there’s always a detail or two that keeps the film worthy of your attention.

Prisoners of the Ghostland is far from a perfect movie, but it’s not one you’ll forget in a hurry.