No one knows how it started, and no one knows how to stop it. One day, a terrifying epidemic hits an unnamed town, causing parents everywhere to attempt to kill their children. We follow Carly (Anne Winters) and Josh (Zackary Arthur) as they try desperately to escape their murderous parents, Brent (Nicolas Cage) and Kendall (Selma Blair).

From the seventies-style title sequence to the head-spinningly abrupt ending, Mom and Dad is always dialled up to eleven. Everything is so bright and so loud that you’re never given a chance to catch your breath. It’s brilliant.

Brian Taylor writes and directs with a confident hand. The concept is horrifying, but it’s played for laughs; the closest tonal match would probably be Shaun Of The Dead. It should be distasteful – there’s a scene where a woman gives birth and, well, things get truly scary for a moment – but thanks to Taylor’s careful shepherding of tone, he keeps things on the right side of offensive. Just about. It helps that although Mom and Dad is violent, that violence is never lingered over; the film is too manic for that. Much of it is implied, rather than seen.

It is in no way a serious movie, but nevertheless, Mom and Dad takes a considerable dive into today’s intergenerational wars. The disillusioned parents are jealous of their children, who have so much of their lives left to live. Neither Brent nor Kendall are happy with how their own have turned out, or how little they have to look forward to. The battles between the generations grow even more heated once Brent’s parents show up.

Nicolas Cage, professional lunatic, does his usual thing; racing after his son whilst barking like a dog, demolishing a pool table with a hammer whilst singing the Hokey Cokey. It’s Selma Blair, in a role that is much more of a departure for her, who stealthily steals the show. Her character is better written than Cage’s. He’s here to be a maniac, she is given more to work with. Whatever substance the film has comes from her; there’s a genuine pathos to her disappointment at where she’s ended up, and her sadness at being pushed aside by her daughter. She can still go toe-to-toe with Cage on the lunacy front, however. 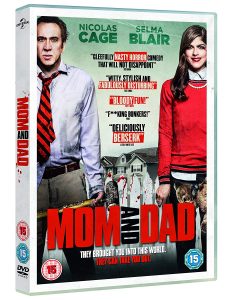 The movie only makes a couple of missteps. Blair delivers a monologue that seems to imply childbirth is the wildest desire of every woman; an assertion that’s as dated as it is exasperating. This brings in to question what happens to the childless adults during this strange epidemic, although at eighty minutes long, it is perhaps unfair to ask Mom and Dad to explore every single facet of its concept. Additionally, the sudden, inconclusive finale is sure to displease many.

Mom and Dad is a lot of things: demented, outrageous, strange, hilarious, vivid and frightening. More than anything though, it’s just plain fun. It won’t be for everyone, but those attuned to its unhinged sense of humour are bound to have a riotous time.

Mom and Dad is available on Digital Download, Blu-Ray™ and DVD from 16 July 2018