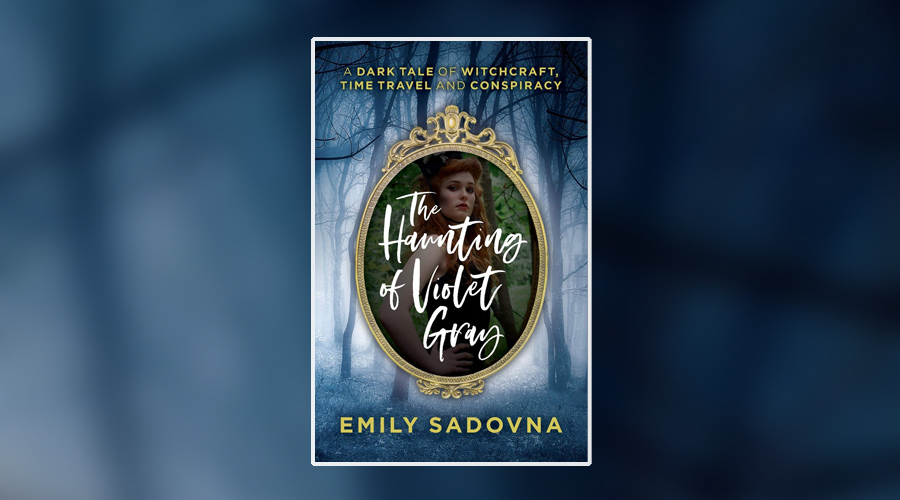 Emily Sadovna’s The Haunting of Violet Gray is a book with great promise, combining an intriguing premise and a filmic plot with a lot of interesting and thought-provoking ideas – so it’s a shame that the telling of the story falls a little short.

This novel centres on a mysterious young woman called Cat, who showed up out of the blue one night two years ago with no memory of who she is or how she came to be there. When she one day answers a job advert to be a cleaner at a beautiful mansion, Cat is drawn into the world of modern witchcraft – and also finds herself repeatedly haunted by a supernatural presence in the house too.

As Cat begins to learn where she came from and what she’s capable of in the present day, the journal of a witch written in 1940 also captures her attention, and Cat bears witness to the events leading up to a secret occultist ritual, the deadly outcome of which has remained a secret ever since. It’s not long, then, before the two stories begin to intertwine with one another, and Cat is left to piece together the clues of a mystery much bigger than herself, coming up with an answer that will leave her fighting for her right to survive.

From the synopsis alone, it’s clear that this book has a lot of grand ideas – and a lot of elements to bring together to tell them – which is why a tighter storytelling technique could have worked wonders. The opening of the book is rushed, and within three chapters we’re presented with the amnesiac heroine, a creepy haunted house, and a drop-dead-gorgeous, entirely-too-dashing love interest that you’re not sure you can trust. The introduction of the parallel story of the witches in the summer of 1940 offered a compelling counterpoint to the modern day story, but once Cat had the journal in her hands, it became less about uncovering the links between the past and the present than it did about introducing Cat’s ability to astral project – and the major reveals of the past then get shared in a character info-dump before we barely even get stuck into it.

“I never thought of myself as happy. I wasn’t depressed, but I bumbled along, existing and not living or feeling anything. It wasn’t until I arrived at the house I began to wake up.”

But while plenty of early reels of exposition, stilted dialogue and repetitive phrases meant that Violet Gray could prove to be a struggle to read at times, that’s not to say that this novel didn’t deliver a fascinating story. Centred on the three main prongs of witchcraft, time travel and conspiracy, this is one of the more creative, imaginative reads out there right now, and the novel’s twists and turns do have the potential to surprise and delight readers. The descriptions are impressive and otherworldly, and Sadovna really has created a supernatural atmosphere of intrigue, suspense and suspicion, even if the characters themselves are lacking depth. After a clunky start, the novel comes into its own in its second half, when Cat learns more about where she comes from, and from that point onwards, Violet Gray tackles much darker themes and the book itself becomes an altogether more gripping experience.

It’s clear then that there are the nuggets of a good story here, but it’s been buried under a raw writing style that proves a little too distracting to offer a completely immersive reading experience. At times it felt like The Haunting of Violet Gray was so determined to rush forward that it didn’t take the time to linger in the inventive, paranormal world it had created, and if it had decided to tease out the mystery a bit longer and refrain from masses of explanation, this book could have become something great.

The Haunting of Violet Gray was published on 25 September 2018