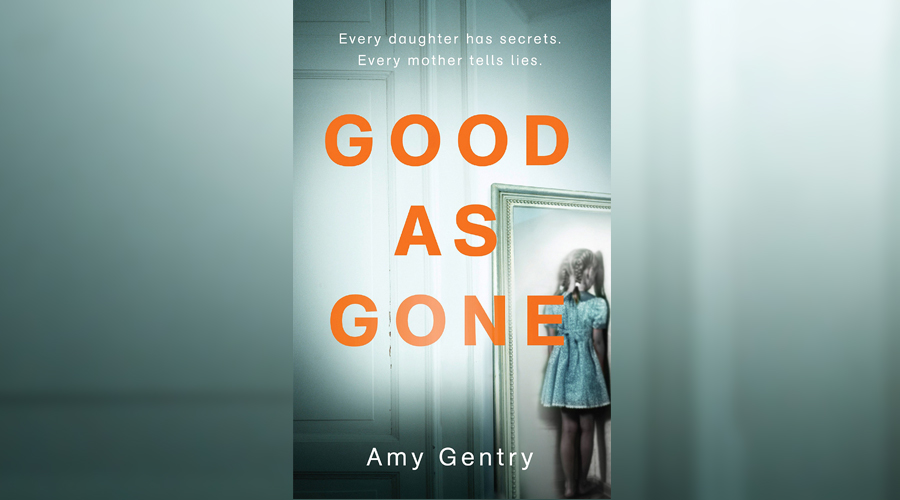 Good As Gone bills itself as a novel of suspense and from the moment it opens with a prologue that chillingly describes the moment 13-year-old Julie Whitaker was taken from her home at knifepoint, as witnessed by her 10-year-old sister Jane, this is one novel that more than lives up to its promise.

Eight years after Julie was taken, the statistics are against the Whitakers. The chances are their child will never come home, so the family do as much as they can to try and move on, while never really being able to address the cause of their grief, even amongst themselves. Then a miracle happens and Julie comes home, now 21 years old and armed with the explanation that she was sold to a human-trafficking ring and ended up in Mexico with a drug lord. Only, once the shock of Julie’s reappearance fades, Julie’s story doesn’t quite add up, and the family – especially Julie’s mum Anna – is left wondering if their prayers really have been answered, or if Julie isn’t actually who she says she is.

What follows is an instantly engaging narrative that takes us chronologically forward though Anna’s suspicions after her daughter’s sudden return and backwards through the many lives the Julie that turns up on the doorstep has lived to get her to this point. The clash in perspectives between grieving, doubting mother and secretive, evasive daughter effortlessly play off each other as the story unfolds and Good As Gone soon establishes itself as a novel that refuses to shy away from the painful reality of girls who get lost in the system, or the uncomfortably dark thoughts that these characters, especially, are prone to having.

“The statistics say that three-quarters of abducted children who are murdered are dead within the first three hours of being taken. Three hours is just about how long we think Jane sat in her closet, rigid with fear, before rousing Tom and me with panicked crying. By the time we knew Julie was gone, her fate was sealed.”

As far as thrillers go, Good As Gone is a good one, keeping readers as suspicious and questioning as Anna and as paranoid and untrusting as Julie, never sure who to believe or which narrator to put our trust in as the puzzle comes together piece by piece. But, like I’ve found in most novels of this kind, Good As Gone also falls victim to a somewhat rushed ending and some underdeveloped peripheral characters.

Anna’s husband Tom, for example, spends most of the novel on the sidelines, deemed too sensitive and too accepting of Julie’s return for Anna to be able to share her worries with him, while her daughter Jane is explained away as a superficially rebellious teen who Anna doesn’t need to focus on because at least she’s safe, so it would have been nice to delve deeper into that family dynamic. As for the ending, while it’s undeniably a satisfying one, after all the intrigue and misdirections presented to readers beforehand, the conclusion feels a little too stale in its delivery, meaning the final chapters feel like a bit of a let down compared to what’s come before.

But there’s no denying that this is a gripping read nonetheless and in Good As Gone, Amy Gentry crafts an intelligent thriller that places a fraught mother-daughter relationship at its core and digs deep into questions of identity, grief and trauma. Between the oppressive setting of the Texas summer heat, the dark and dangerous lives Julie’s lived before and Anna’s increasingly desperate determination to unpick all of Julie’s lies, this is one novel that draws you close and definitely keeps you turning the pages.

Doctor Who: What went wrong with the British sci-fi series?