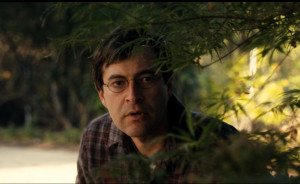 When the unexpected happens you might as well just roll with it. That’s the decision Sophie and Ethan make when a couples retreat takes a baffling turn. Plunging into a slippery world where comprehension is at a premium, nothing in The One I Love is quite what it seems and it’s all the more brilliant for it.

A corny opening sequence that swiftly turns on its head sets the scene for what’s to follow. Sophie (Elisabeth Moss) and Ethan’s (Mark Duplass) marriage is on the rocks. The years have not been kind as the early magic faded away to be replaced by recriminations and a lack of understanding. To fix this, they turn to Ted Danson’s marriage counsellor who sends them off to a picturesque country house to try and reconnect and discover what it is they really want from each other. What starts off as a delightful trip soon descends into twisting confusion when the guest house springs an unanticipated surprise.

With only three actors in the entire film, and one of those only a fleeting appearance, a lot rests on the shoulders of Moss and Duplass. They prove up to task, displaying a rapport that conveys years of married familiarity. Moss plays deceit particularly well while Duplass puts in a multi-faceted performance that brings out substantially different characteristics in Ethan.

They anchor Charlie McDowell’s remarkable debut feature allowing him to build on their firm base. He sets the scene well, casting his beautiful backdrop in a soft amber glow without ever allowing it to distract from the story. Justin Lader’s screenplay is a clever beast, rolling through a series of stages that start out with confusion before moving through intriguing and ultimately sinister developments. A feeling of claustrophobia begins to take grip, as if Sophie and Ethan have entered a twilight world that they are incapable of escaping from.

This is high concept that actually follows through for once. The twists and turns just keep coming right up until the very end. There is not a moment that lasts longer than it should, the pace gradually increasing as things really start to get out of hand. A dinner party near the end is a thing of awkwardly cringing beauty. For a film that relies on keeping the audience off balance, only the right amount of detail is available. Explanation is provided only where absolutely needed. Ambiguity and the unknown rule supreme.

Not every turn is quite as leftfield as intended. After the story has played out long enough, its rhythms become discernible telegraphing a couple of late changes in direction. The glossy veneer of false reality is also punctured as the not so happily married couple, particularly Sophie, deal with the bizarre situation in an unrealistic manner. It’s one thing to go with the flow; it’s another to blindly throw all caution to the wind.

Even with that factored in, The One I Love is a highly unique debut that cries out for a repeat viewing. If you’ve ever tried to iron out disagreeable quirks in your partner, this film might make you think twice. Or it might not. Either way there’s a price to be paid.

Sundance London 2014 Round-Up – The Highs, The Lows & The Best Films On Show