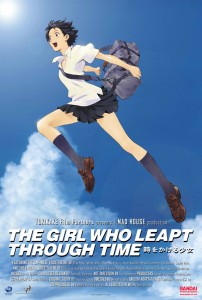 The tag line for this movie is simply, “There is a future that we can’t wait for”, and it couldn’t be more apt of my feelings before I watch this movie. World cinema/Manga movies are not the most viewed in this country but they do have a good following since Studio Ghibli made it into the mainstream with ‘Grave of the Fireflies’ in the 80s or ‘Ponyo’ more recently. Which is why when looking for a new movie to watch I don’t just stay in the new release section.

This film was more exciting and interesting than I was expecting it to be. This story doesn’t try to over-play the use of time travel and doesn’t use violence to tell the story.  It had twists that I never suspected or even thought of, mainly because with Japanese anime you can’t tell how much realism is going to be in the story. The mysticism that so much anime has is integral to the storytelling; the elements of magic and religion that intertwine with technology allow the writers to take the story in any number of different directions.

The movie starts with a very typical Japanese anime schoolgirl starting her day, late as usual, preparing to run errands for her parents while scolding her sister for being, well, her sister. Although she complains like a teenager, she doesn’t have to be asked twice to do something by her parents and always has a polite hello for any neighbours she sees. She is a likeable girl.

Her story takes her through a normal day at school, seeing her friends before having an accident that should kill her when, would you believe it, she somehow escapes unharmed coming crashing to the ground just a few metres and a few seconds from the accident zone. She lives, but she’s not sure how she did it. She continues with her day, making a trip to see her Aunt; known as Aunty Witch mysteriously enough, and upon telling her about the strange event that happened to her, her Aunt tells her that she time leaped. Well of course, don’t you know, lots of girls of her age sometimes time leap. Must be something in the hormones. Even Aunty Witch used to time travel. From this point on our main character, Makoto, uses her new found power to time travel, fixing mistakes such as doing better on tests or avoiding awkward conversations with her friend Chiaki until she notices that she has a new and strange tattoo of her arm of a number.

The origins of this tattoo are revealed slowly in the story with hints at both past and future events merging together as Makoto tries to make the best of all situations for everyone. This story doesn’t tell so much the story of the corruption of power, but rather the naivety of the young and hopeful. Makoto tries to do what is right when she finds out what her ability to time travel means and where it comes from. In a way, having this power teachers her that she shouldn’t try to control situations but let life happen.

I don’t want to give too much away because I really believe that this film is worth watching, it’s something a bit different. If you like sci-fi and anime that has some thought behind it then this is the movie for you. Yet, there is accessibility for anyone.

The Boy and the Beast DVD Review