Literature News Roundup: Winners Have Been Chosen to Die in Martin’s Song of Ice and Fire 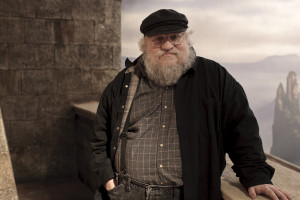 Remember how George R R Martin was offering readers the chance to feature, and die in, the next books of the author’s Song of Ice and Fire series? Two lucky (and rich) people have now been selected for the charity auction’s prize after paying $20,000 for the honour. One of whom is a Facebook employee named David Goldblatt. Martin has now also been announced as a guest for this year’s Edinburgh International Book Festival, which runs throughout August. The Festival director has stated that he expects the queues for the author’s book signing to stretch ‘halfway across Edinburgh’.

The winner of the Commonwealth Short Story Prize was announced 13 June. This year the award of £5,000 was given to Ugandan writer and Creative Writing lecturer Jennifer Nansubuga Makumbi for ‘Let’s Tell This Story Properly’ – a story about a Ugandan woman in Manchester who returns to her native country after the sudden death of her husband.

James Franco has achieved another literary feat, this time publishing a short story – ‘Bungalow 89’ – in Vice magazine, featuring a protagonist called ‘Lindsay Lohan’, who Franco visits and chats with at the Chateau Marmont Hotel in Los Angeles.

Early last week J K Rowling made a substantial monetary donation to the Better Together campaign, against the Yes vote for Scottish Independence. In this high profile act against Independence, Rowling donated £1 million and caused furore among pro-Scottish separatists on social media.

Oscar winner Lupita Nyong’o will be producing and starring in a film adaptation of the recent acclaimed novel Americanah by Chimamanda Ngozi Adichie (her previous novel, Orange prize-winning Half of a Yellow Sun, has also been turned into a movie). The novel follows two Nigerians in love, who are torn apart when they must flee their country to escape the military dictatorship.

Bryan Cranston (Breaking Bad’s Walter White) will be adapting Conn and Hal Iggulden’s Dangerous Book for Boys for television as a comedy series.

Finally, there is now a finalised schedule and line-up for the UK’s first ever YA Literature Convention (part of London Film and Comic Con in July). The schedule for YALC can be found here