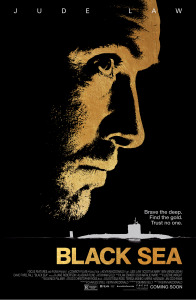 From the moment it begins, there’s an invariable sense of dread radiating from the dark depths of Black Sea. Confining both his characters and audience in the morose, mechanical corridors of a rusting Soviet sub for much of the running time, director Kevin Macdonald meticulously engineers an unrelenting atmosphere of suffocating claustrophobia that washes over and then envelops you whole.

Screenwriter Dennis Kelly (creator of TV’s Utopia) constructs his story like a ticking time bomb that eventually detonates with the ferocity of a depth charge. The aforementioned submarine is manned by Captain Robinson (Jude Law) who, along with a crew jointly comprised of Westerners and Russians, is searching for a Nazi U-Boat rumoured to be loaded with gold, at the behest of a mysterious financier. Soon however, the clashing personalities of Robinson’s bloodthirsty shipmates threaten both the success of the mission and the lives of all who are on board.

Black Sea is a film that works best as a straightforward, stripped-back thriller. Any attempts to plunge greater thematic depths through superfluous plot twists involving shady double-crosses, and jarring romanticised flashbacks of Robinson’s time spent with his estranged wife and child, sink like a stone.

Harnessing the intensity of Jude Law’s superb central performance, Macdonald fervently turns up the heat on his pressure cooker. Law, complete with a commendable and suitably gruff Scottish brogue, is an earthy but forceful presence. He’s flawed, relatable, and ingrained with a stern resilience that’s capable of commanding this motley crew. However, soon both Robinson and we realise that there’s no way to control this vicious bunch of caged animals.

With Christopher Ross’ close and claustrophobic cinematography being perfectly complemented by Ilan Eshkeri’s spiky score, Macdonald submerges the audience within an asphyxiating milieu. Strong support from Ben Mendelsohn, Michael Smiley and Scoot McNairy further infuse the atmosphere with anxiety, leaving a trail of clammy palms and chewed nails in their wake.

Macdonald contrives a succession of taut set pieces, many of which will evoke memories of other genre examples, such as Das Boot and Crimson Tide. But even when held up against the memory of these arguably superior efforts, Macdonald and Black Sea equally manage to hold their own. The film’s standout moment is a pulsating walk across the seabed that involves divers dangling off of precipices and confronted with the sight of floating dead bodies. The characters may be desperately trying to conserve oxygen, but it’s the audience that end up gasping for air.